Overwatch is, for the most part, a game that thrives on chaos. While its high time-to-kill means individual firefights are drawn-out tug-of-wars, an Overwatch match is a fast, ever-flowing brawl. Ashe, hero number 29 and the latest addition to Overwatch’s roster, is an interesting juxtaposition to the game’s madness, especially in the wake of the kinetic and machine-gun-happy Wrecking Ball. She’s one for the more patient player. And, as any sniper knows, patience provides the sweetest rewards.

That’s not to say Ashe is a sniper, of course. While her lever-action rifle provides the longest range in the game bar only Widowmaker’s weapon, it’s designed for medium-to-long range encounters. Hold down right-click and you aim down the sights in a way unseen in Overwatch before. The flip-up transparent sight provides the classic ADS zoom popularised by shooters like Call of Duty, and while feeling a little out of place in the mostly shoot-from-the-hip world of Overwatch, it absolutely works. The rifle also fires with a satisfying crack, the result of Blizzard collaborating with the gun nuts over at Black Ops developer Treyarch.

As a lever-action rifle, though, you must cycle between each of the eight rounds in the magazine. When aiming down the sights, this inflicts a substantial pause between each shot, although when fired from the hip the rifle can be ‘speed shot’ for a surprisingly rapid salvo. The full reload is where the real time punishment is inflicted, though, as each bullet must be fed into the chamber individually, akin to reloading shotgun shells in many FPS games. As such, each and every bullet needs to count, and you need to count your bullets to ensure you’re not in a hairy situation when that lengthy reload begins.

If you do find yourself caught out then the coach gun comes in exceptionally handy. A tap of the shift key fires a round of buckshot from this sawn-off, propelling you (and any enemy caught in the spread) backward. While handy for booping people, this is also the perfect escape tool. Ashe’s reveal video demonstrated her using it akin to the iconic Team Fortress 2 Soldier rocket jump, but while its almost two-storey jump is brilliant for placing Ashe in sniper nests, the ten-second cooldown means you need to use it sparingly for positioning; ideally you want it primed and ready for any scraps you want an instant escape from. 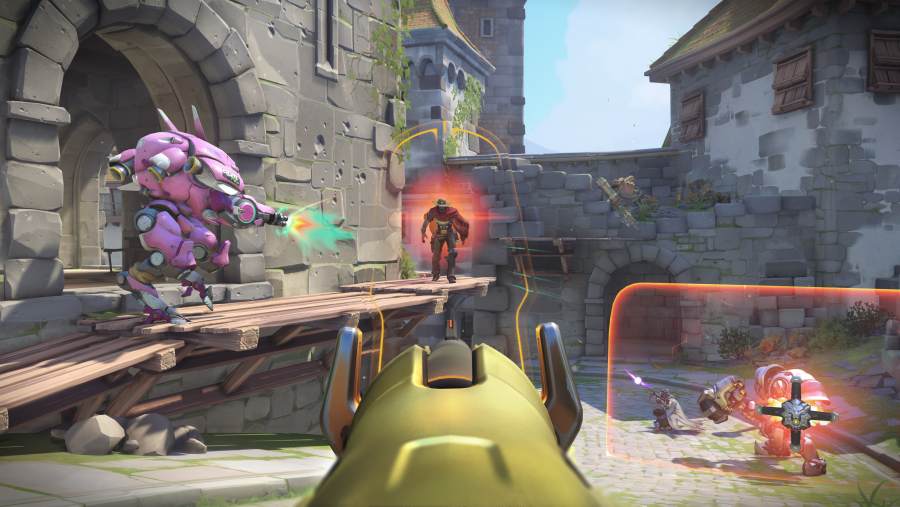 Also on a ten-second cooldown is Ashe’s dynamite, which is a skill that may prove more entertaining than useful. A hurled explosive, it can be detonated early if you shoot it in mid-air. The arc of the throw has been designed so that if you follow up the throw with an immediate shot without moving, the dynamite will pass right through your crosshair at the moment you fire. My hands-on session proved this to be a reliable tactic time and time again, and there’s no denying the gleeful satisfaction of shooting a tiny target out of mid-air (let’s pretend the dynamite’s hitbox isn’t clearly bigger than the bomb itself).

Fail to shoot the dynamite, though, and you’ll have to endure an agonising wait for the fuse to burn down. As such, a standard throw must be pre-planned far in advance of enemy players being within the blast radius. Any character with an escape skill can very easily avoid being caught up in a dynamite explosion if you can’t get the shot in.

The TNT isn’t Ashe’s explosive finale, though: that honour belongs to Bob. A gunslinger Omnic robot, Bob is Ashe’s ultimate (which is called B.O.B.), and literally acts as a seventh member of your team when summoned. 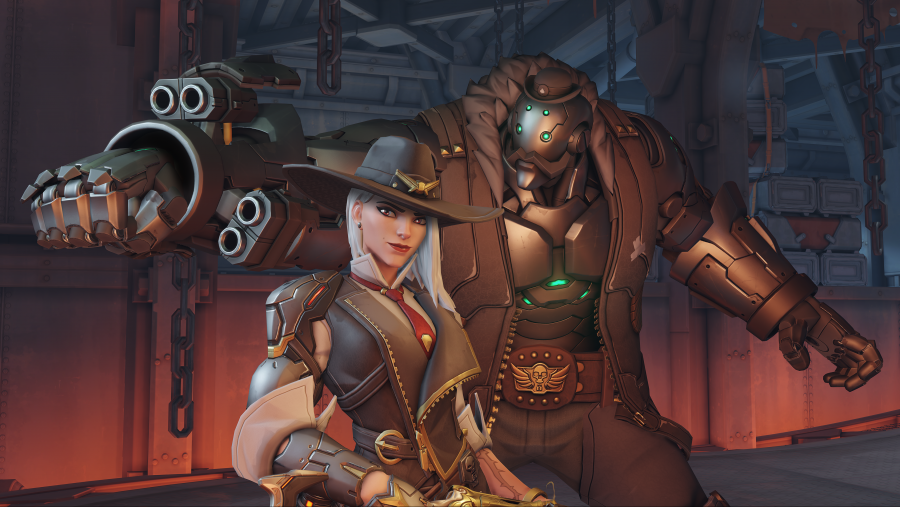 Bob is a big fella, and not one to be underestimated. With a beefy health pool of 1200, he can take a lot of punishment, and can deal a fair amount himself. When summoned he charges, Reinhardt style, in a straight line forward from your initial summon point (quick word of advice: don’t point him towards a cliff or Rialto’s canal, unless you’re looking to trash your ult). After his barraging entrance, Bob is then able to wander around, hosing down targets with his machine guns. As a bonafide seventh hero, he’s even able to capture points, so is bound to be used as part of plenty of fascinating tactics.

Bob can be debuffed like any other character. Zenyatta Discord orbs, Ana sleep darts, McCree flashbangs; all are effective foils against Bob.

A rifle, a shotgun, a stick of dynamite, and a robot buddy; Ashe’s toolkit is perhaps one of the most simple in the game, but one that feels incredibly honed. She’s a hero designed with one goal in mind – an outstanding precision shooter that can out-range all but Overwatch’s dedicated femme fatale sniper. That’s a departure from the previous few heroes, who have emphasised Blizzard’s commitment to interesting hybrid roles. As such, Ashe won’t be enjoyed by the largest range of players. She’s for those pre-equipped with patience; those who can carefully calculate lengthy cooldowns and the perfect shot trajectory. If that’s you, then you’re about to get a treat dressed in a snazzy stetson.