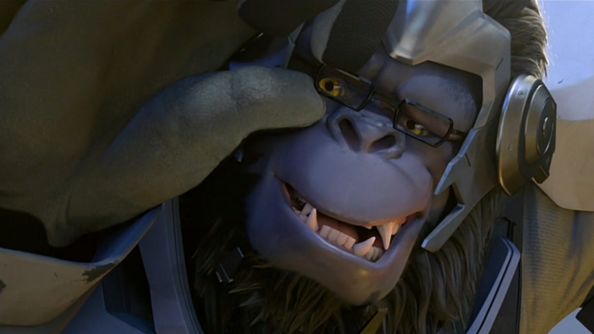 Blizzard have just revealed a brand new game called Overwatch. It’s a multiplayer first person shooter coming to PC, set on a futuristic Earth. It’ll feature six versus six action on objective based maps. There’s dozens of unique player characters that all have their own weaponary and combat styles. Some use guns, bows and arrows, swords and even special magical powers.

It’s touted to be super accessible, and coming “a lot sooner than we think”; the beta launches in 2015.

Blizzard’s new game is set in a brand new IP; a futuristic fantasy world. It’s a first person mutliplayer shooter set in arena style maps. There’s a “good vs evil” theme going on; Overwatch – the name of the game – was the name of an organisation that fights evil, but was disbanded. Now the evil types are back, prompting their return, and the following skirmishes.

Each game is six versus six on objective based maps. All the heroes (and villians) have unique abilities and weapons that denote their character. Pistols, snipers, bows, swords, shurkiens, gorrila fists and psionic powers, there’s hardly any cross over.

Blizzard have said that they plan to make Overwatch easy to get into and play, much like they did for Hearthstone and Heroes of the Storm; new players won’t feel intimdated.

Here’s some previews of some of the playable characters we saw: This is Reaper. He’s a shadow clad assassin who uses dual-pistols. He’s rather sneaky and likes to perform ambushes. His special ability allows him to fire his pistols 360 degrees, slaughtering anything that comes close to him. Here’s Torbjoin. He’s a techaholic dwarf that loves his gadgets. He can jetpack around the map while setting up a mutitude of machinery, including his deadly gatling gun turret. His special ability turns him into a firey avatar, allowing him to quickly rebuild his turrets for powerful defensive capabilities. If you thought building turrets was cool, this fancy robot can transform himself into one in a moments notice. Bastion is an armoured droid that uses armour and rifles to dominate the battlefield. If he feels threatened, he can hunker up transformer’s style into a massive turret. 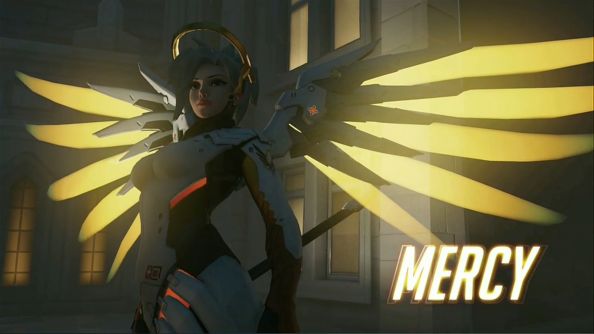 Finally, here’s Mercy. She’s a walking flying angelic healing dispenser that can support her team with buffs. She can also hold her own by performing ariel takedowns using her pistol.

There’s dozens of more heroes; our Tim is on the BlizzCon floor, and will no doubt play some Overwatch himself and tell you all about them. Check back for his thoughts later!