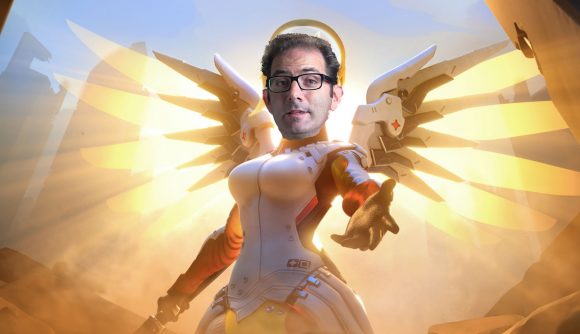 In a recent interview PCGamesN conducted with various members of the Overwatch team, Jeff Kaplan once again proved he’s pretty cool by telling us if he could be any Overwatch hero, he’d be Mercy so that he can wipe out the coronavirus. What a hero.

During interviews with the Overwatch team, we asked them what hero they would want the abilities of if they had to pick one. Jeff Chamberlain out the gate answered Echo because “she can fly and she can turn into anything she wants to”. Touché.

Geoff Goodman, the lead hero designer for Overwatch chose hard-light architect Symmetra. “I’ll go with the practical answer and say Symmetra because of being able to build hard-light things and being able to teleport. I mean who doesn’t want to be able to teleport? That rather than having magical weapons I couldn’t use in my day-to-day.” Sensible. We’re not too sure about the legalities of owning a Telsa canon either.

Joshua Noh, an associate game designer instead opted for Pharah. “I’d probably go with Pharah. Just having a suit you can take on and off is pretty convenient, you know, and you can fly to work.”

The question stumped senior sound designer Geoff Garnett. With a furrowed brow he tells us: “That’s a really tough one. I mean honestly, it would be cool to fly but it seems like a cheap response to say Echo. I think it’d also be really cool to Earthshatter with a rocket hammer too. But as far as a sheer ability, shooting dragons out of an arrow would be awesome. Even though I’m the worst Hanzo player ever, to shoot a giant mystical dragon that melts people would be pretty cool.”

But when it came to asking Jeff Kaplan, game director for Overwatch he picked the all-important Dr Angela Ziegler. “I would be Mercy and I would healing beam everyone with coronavirus,” Kaplan says. Perhaps that was the best answer due to the current COVID-19 pandemic, but it was still the answer that shocked us the most.

In any case, when it comes to heroes we now know Echo is the last for Overwatch. With the Overwatch 2 release date still a mystery, however, who knows when we’ll get to see the next characters coming to that world.