The backstories of Overwatch are set to play out on screens and pages outside of the game as graphic novels and animated shorts are in production. From the BlizzCon main stage, Chris Metzen spoke of the ways the Blizzard production team are working on bringing the game’s worlds and characters to life when there’s no story mode to speak of.

Joined by Jeff Chamberlain, director of the intial reveal cinematic shown at last year’s BlizzCon, plans were revealed for the extended Overwatch universe. “A long time ago we realised it doesn’t have a linear storyline, like other games we do,” said Chamberlain. “So recently Blizz has been doing sotrytelling outside of the game, for Draenor and Legacy of the Void, so we have a precedent for short animations outside the game.”

The shorts, of which a Work in Progress reel was shown, will explore the backstories of some characters, and how they came to be a part of Overwatch, or how the global peacekeeping initiative dissolved in the wake of a robot uprising known as the Omnic crisis. Shots from the reel showed baby Winston being handed a jar of peanut butter by a man wearing glasses which look suspiciously like the ones Winston wears as an adult (and goes into a primal rage over whenever they are broken).

Metzen also spoke of the graphic novel that is currently in production to be self-published by the company, though they are not averse to being approached by publishing houses. The longer form stories will be supported by shortform, web-published free comics, some of which appeared to be in an advanced state of artwork and Metzen promised there would be a “flurry” of these story snippets around the launch of the game next spring. There will also be a “Source book” in the collector’s edition of the game at launch filled with artwork and backstory on characters, their outfits and the weapons they use in game. 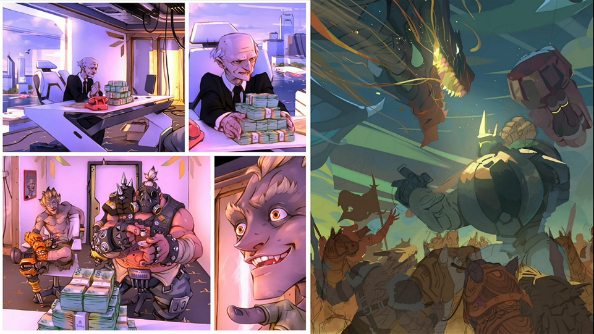 Further details gleaned from the panel and Q&A are that the team has toyed with the idea that Blizzard itself exists within the world of Overwatch, given the existence of a StarCraft pro player. Metzen admitted: “This is not official in any way, but we may have drawn a few pictures of an event, or a location, called “Blizzneyland”. Of course, for very obvious reasons, we are unlikely to use a name that sounds like that, but we are interested in maybe doing an amusement park area.”

The diverse roster of heroes for Overwatch also gained fan appreciation, as one questioner asked whether there were any gay heroes in the line-up, to which Metzen replied with a very matter of fact yes. “We want it to playout organically,” he said, after confirming multiple LGBT heroes in the cast. “We don’t want it to be a data point or feel contrived in any way.”