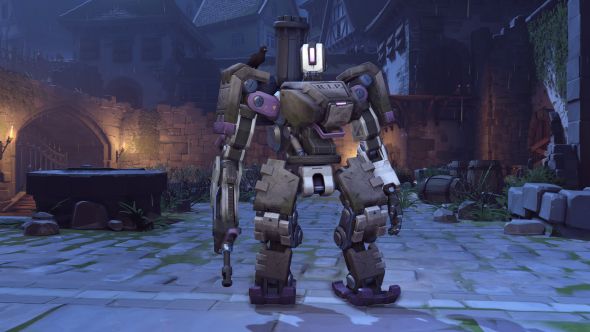 Bastion, one of Overwatch’s most neglected heroes since the game’s launch last May, is finally getting some balancing love. Principal designer Geoff Goodman spelled out the changes Blizzard are considering over on the Overwatch forums, and they’ll “hopefully” be coming to the PTR “fairly soon” for us all to try out.

We reckon Overwatch is one of the best multiplayer games on PC.

Goodman says the team are still tweaking Bastion internally, but he did announce a few changes that are “likely” to make it to the PTR at some point. Bastion’s minigun-wielding sentry mode could be refocused to smash barriers and bust tanks (that’s Blizzard taking aim at the recent tank meta again), and Blizzard also want Bastion to feel less vulnerable in this mode.

But the biggest changes will likely come to Bastion’s self-repair ability. Goodman says Blizzard’s internal build “has Bastion able to use self-repair while moving and also having it no longer interrupted when taking damage. To balance that out it is now on a resource system (similar to the route D.Va’s defense matrix went). These changes have turned this ability from a more niche, rarely used ability, to a much more powerful and core survivability tool.”

Here’s Goodman’s postif you’d like to read it in full.

Bastion’s Overwatch career has been controversial. Did you know he had his own mini-Reinhardt shield in the beta? Madness. Since launch he’s had scant attention paid to his issues, one of which is that he has so many counters, and places such a burden on the rest of the team when it comes to protecting him, that he is rarely picked at high skill levels. Hopefully these changes will herald his return to the mix.