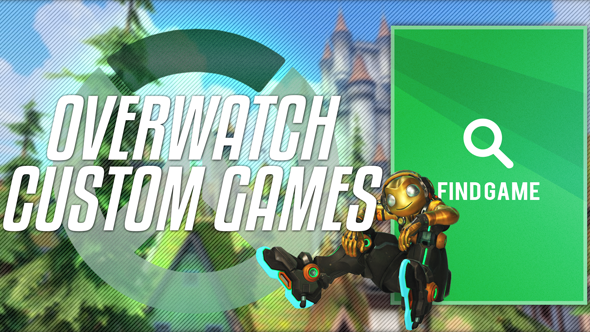 Blizzard have crafted a wonderful game in Overwatch, but can you do better? If you’ve got a great idea for a cool game mode, you can probably build it in Overwatch’s custom games. The toolset allows you to alter the values of pretty much everything, meaning you can have ults active the entire match and HP soaring into the thousands.

Custom games have traditionally been for friends to experiment with, but Blizzard have changed this with the latest update to Overwatch. Now you can use a server browser on the PTR to explore public custom games, or set one up yourself and let anyone join in the fun. Need an idea for which crazy game mode to play? We’ve rounded up some of the best community-created custom matches for you to recreate below. 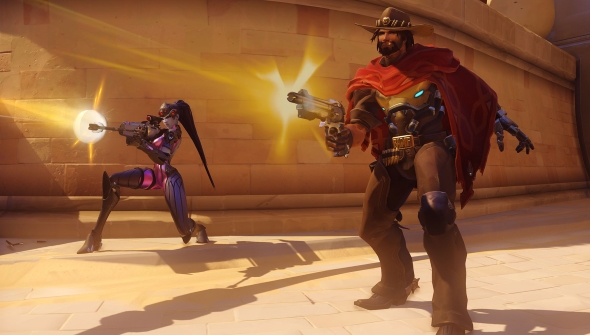 It makes sense that, with the advent of Overwatch’s 3v3 Elimination mode, players would eventually find a way to emulate the more hard-core leanings of Counter-Strike within Blizzard’s fast-and-loose shooter. Global Offensive, as featured over on PVP Live, is a 6-a-side elimination game that limits character picks to the most ‘realistic’ choices; you’ll only find Soldier 76, McCree, and Windowmaker here. Whatsmore, you can only score kills through headshots. Like we said, this really embraces the hard-core leanings of CS:Go.

Increase damage to 500%, disable ultimates, restrict damage to headshots only, and you can create an elimination mode that’s not only thrilling, but a great training ground for fine-tuned aiming.

Inspired by the incredibly popular anime of the same name, Attack on Titan roughly recreates the roles of humanity and Titans with a limited pick of Overwatch heroes. Representing the last garrison of humans are Genji, Hanzo, and Widowmaker, whose wall-climbing and grappling abilities help replicate the zippy flight of the omni-directional harnesses used by AoT characters. Movement speed is drastically increased to allow those street-long leaps.

Attacking the map are the Titans, here played by Winston and Roadhog. Their health and damage is vastly buffed, but being stuck on the ground means they don’t have the edge on the incredibly nimble garrison team. Played on Ilios (plenty of walls to bounce off) in Elimination mode, you can recreate the panic and stakes of Attack on Titan, if not the horror and scale. See it in action in the video from FalseProof above, and check out the rules here. 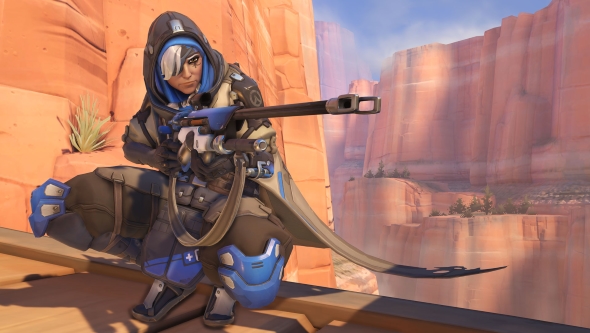 Along with boss fights, variations of Anna Paintball are very common on the server browser. A one-hit-kill game, both sides can only play as Anna and use only her sniper rifle to score a frag. With projectile speed and damage increased to max, it means you’ll need to be fast on your feet to ensure you’re never in anyone’s sights long enough for them to pull the trigger. Of course, this makes killing people yourself incredibly challenging too.

The end result is either a tense, almost Rainbow Six-style hunt for the enemy, or a rapid-fire mix of sprints and jumps akin to the ‘90s arena shooter boom. Whatever the outcome, it’s clear why Anna Paintball is so popular.

One of the most popular modes on the Overwatch sub-Reddit, Reinhardt Rumble is a Control game fought purely with teams of sped-up German hammer swingers. With movement increased to maximum and health lowered as far as you’re willing to go, Control games become a whirlwind of swings, hammer-downs, and rocket-propelled dashes. The lowered health means it only takes a hit or two to be knocked out, but trying to hit a Reinhardt that runs as fast as a Tracer is quite the challenge.

You’ll need to completely remove the cool down on the charge ability, but increase the wait on Firestrike and Earthshatter to 300%. To see the mayhem in action, check out the video above, courtesy of the Yogscast.

The classic after-school sport makes it into Overwatch thanks to this elaborate badminton custom game, as popularised on YouTube by Korea’s Quix Team. Two Genjis (or four, should you wish to play doubles) use their deflect ability to bat a grenade back and forth over a ‘net’ created by Mercy’s heal beam. By reducing the cooldown on deflect to zero, Genji can constantly hit the grenade.

The mode needs to be played on Volskaya Industries as a skirmish game, and you’ll require two or four Genjis, two Mercys, and a Junkrat. Control point A makes the perfect court, and Junkrat can fire shuttlecock grenades into the match from the roof of the adjacent building. Junkrat also plays referee from this vantage point, and should tally up which team is winning.

The rules are simple; if the grenade lands in your side of the court, the other team wins a point. Junkrat can tell who was the last team to bat the grenade by the colour it flashes.

Everyone’s favourite rollerblading musician turns into an Olympic athlete in this fun mode devised by Reddit userMCX14. By increasing movement speed to max, zeroing cooldowns, and reducing damage taken to 0.10, you can create a pretty incredible race between Lucios.

You’re best setting things up on an escort map, since there’s a natural path from start to finish. The focus on getting from A to B really allows you to explore a map and find the best shortcuts and coolest jumps, and no one will disrupt your flow with a headshot. There’s no way of scoring the races – custom games aren’t that customisable – but it’ll be pretty obvious who’s been left in the dust.

The classic Arnie film recreated in Overwatch. Creator Dartjuk’s rules are simple: a team of three Soldier 76s needs to find and kill one beefed-up Sombra. Yup, it’s a trio of army dudes trying to murder an invisible beast.

In order to build the tension, the Soldiers need to have their HP and their speed lowered. Oh, and they can’t use skills either. Predator Sombra, meanwhile, gets all her stats buffed up so she can quietly stalk and eliminate those trying to kill her. All the values you need are at the start of the video above.

The game uses the 3v3 Elimination mode as its foundation, which provides the Counter-Strike-style pressure as your team is picked off one by one. Healing is turned off too, so each stray bullet that hits home inches you closer to game over. The Soldiers will have to stick together and co-ordinate if they’re to take out Sombra, since she severely outclasses a lone wolf. Three guys with pulse rifles working as a unit though? They should make it to the choppa. 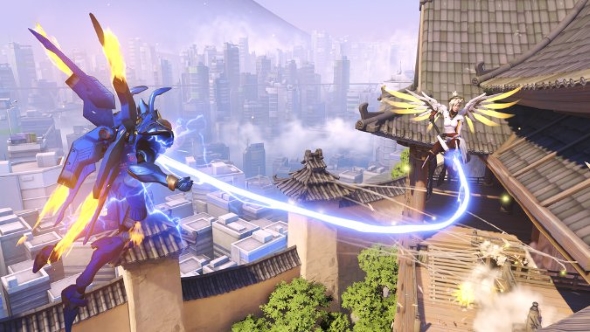 There are several characters in Overwatch with the power to fly, or with flight-like abilities. Genji can dash forward through thin air, as can Tracer, and the likes of D.Va and Pharah have rocket boosters to keep their feet off the ground. And as anyone who’s played the all-Mercys-and-Pharahs brawl will know, fighting in mid-air is one of Overwatch’s greatest pleasures. So why not make a game where everyone is in the air all of the time?

Any control map will do fine, but you’ll need to limit character picks to those who can stay in the air, and then completely remove any skill cooldowns. This will allow all players to maintain altitude and achieve some seriously high-flying kills.

For a more hardcore approach to this mode, try….

House of the Flying Genji

A mode created by YouTuber Arekkz, this pits two teams of Genjis against each other on Ilios. By turning off cooldowns on abilities, you can infinitely use Swift Strike to keep Genji in the air and ‘fly’. All players can only use Swift Strike, and the first team to 15 kills is the winner. Oh, and to make things even more tense: you can’t touch the ground, otherwise you lose a point. To facilitate this scoring system, the entire team needs to launch themselves over the edge of Ilios’ cliff face so everyone is duelling over the sea. If a player falls, they’ll be automatically killed. 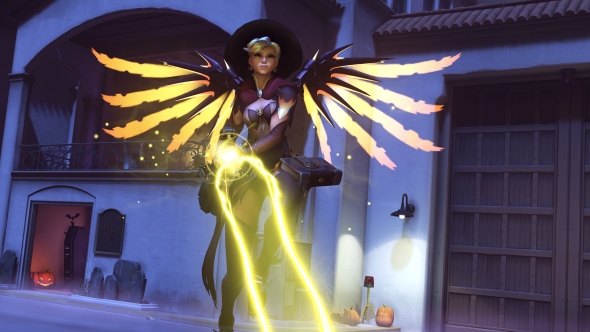 This custom game is currently still in ‘prototype’ stages, with the fine details remaining a topic of discussion over on this very extensive Reddit post. But creator Kydrox’s idea is both simple and fun: an asymmetrical multiplayer mode where one player manages a team of bots, and a team of human players try to defeat them.

The human with the bots plays Mercy, and is backed up by hard-level AI that she must keep alive. By making Mercy more powerful she makes a viable commander. Plus she can quickly bring her minions back from the dead, provided she times that ult correctly. The human players have to fight tooth and nail to wipe the entire team out before she can resurrect them.

While the design isn’t perfect yet, we can see this becoming a firm favourite when the dents are hammered out by the community.

A simple but obvious idea, the road in the middle of Hollywood is perfect for two McCree’s to have a classic Mexican standoff. You’ll need a good, bad, and ugly character to participate (AKA two McCrees and a Junkrat), and a little time to set up.

Junkrat must place a mine in the middle of the road, and the McCrees then face each other in wait. When Junkrat triggers the mine, the first McCree to draw and kill the enemy is the winner. Simple.

There are more complex ideas floating around for advanced high nooning. Try standing back-to-back to begin, triggering Deadeye, then walking away from each other until the timer gets half-way. Then both players must spin around and fire. Deadeye will instantly kill an opponent, making this a game of timing skill rather than aim.

Whichever rules you use or invent, six-shooter duels are a fun and tense way to play. 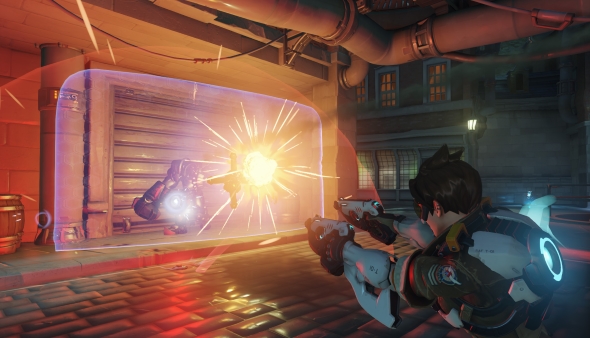 A blend of whack-a-mole and tag, this custom game sees a single Reinhard attempt to squish a trio of Tracers in Elimination mode. Typically this would be impossible, but Reinhardt benefits from double speed and five times the damage he’d normally dish out. This doesn’t make the game a cakewalk for him, though; the Tracers can travel at x1.5 their normal speed and have faster Blink cooldowns, so are still tricky enough to catch.

The Tracer team can’t put out damage, though. The idea is not for them to kill Reinhardt, but to evade death for the entire length of the match. These rules make Tag a very different type of game; one of dodging and clever movement rather than flanking and gunning.

The whole thing can be doubled up by having two Reinhardts and six Tracers, adding to the mayhem. To put a game together yourself, check outthis rule sheet.

A great spin on the idea of a boss battle is AlexACE’s Juggernaut mode, which pits six super-fast Mercys against a single fully buffed Roadhog.

All the Mercy players are set to 150% attack damage and 300% speed, but are reduced to 30% of their normal health. Roadhog gets a whopping 500% health buff, but only moves at 90% his usual speed. This seems a pretty good balance, allowing Roadhog to bat the Mercy players like flies when they approach one by one, but suffer if they attack as a swarm.

These stats are ideal for applying to a number of other characters if you want to improvise; pretty much any tank character will work well as a boss, and there are plenty of other weaker attacker characters that can replace Mercy. It’s about experimenting with the values to ensure the balance is just right.

These are our favourite Overwatch custom games we’ve seen so far. Have you seen anything better? Let us know your finds in the comments.