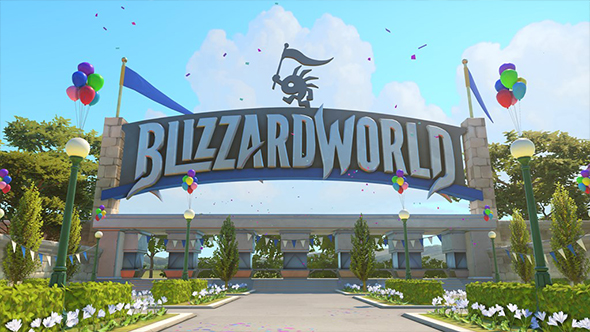 Update, January 16: Blizzard World will open for business next week, on January 23.

Blizzard World, the next map coming to Overwatch, will be available from January 23.

Here’s how to get two free Overwatch League skins.

Blizzard tweeted last night to confirm that the new map and new Blizzard World skins, which include Young Reinhardt and Ecopoint Mei, would go live next week.

Epic memories can only be made in an epic world…

So, grab a ticket & join us for the GRAND OPENING of Blizzard World!

The link in that tweet leads to the Blizzard press centre, where you can download and print off your very own ticket to Blizzard World. Sadly, that seems to have confused a few players, who are asking whether or not the virtual theme park is a real place, or even lamenting the fact they live too far away to visit.

Original story, January 10:Blizzard World could be coming to Overwatch “before the end of this month.” On anOverwatch forum post, game director Jeff Kaplan confirmed that the new map and all the associated items would definitely release “early this year.”

In a series of posts throughout the thread, Kaplan seems reasonably positive that the new map and skins would be ready for the end of January, but does admit that “‘stuff’ can happen,” which could cause a delay. When pushed to explain exactly what that might be, Kaplan says “the map is very close,” but explains a couple of ongoing issues with what he describes as “the map that has the most stuff in it by far.”

Some of those issues include that fact that, among other things, Torbjorn turrets would be destroyed if they were placed on certain rides, and that several invisible collision zones (which prevent players from getting stuck in weird places) needed ongoing work. He also says “we had to do a ton of optimization on Blizz World,” due to its scale, but that “getting it to run fast is super important to us.”

Kaplan also says later on in the thread that the new map and the new loot box items will drop at the same time when they are eventually released. The new balance changes should drop shortly after that, but Kaplan states that that’s “not a promise.” Interestingly, most of the new loot box items are not related to Blizzard World, and there’ll be a “whole range of items,” including “stuff for all heroes.”