There joys of Overwatch are many. Not only is it mechanically great, stuffed with well-designed maps, and washed in bright colours, but there are secrets aplenty. Overwatch Easter eggs can be found in many maps, should you look carefully enough

Need to get up to speed with Blizzard’s new shooter? Check out our Overwatch character guide.

We’ve spent some time scouring around for the shiniest of Overwatch’s hat-tips to other games, and brought our findings to you in this handy spotters guide. How many have you already seen? 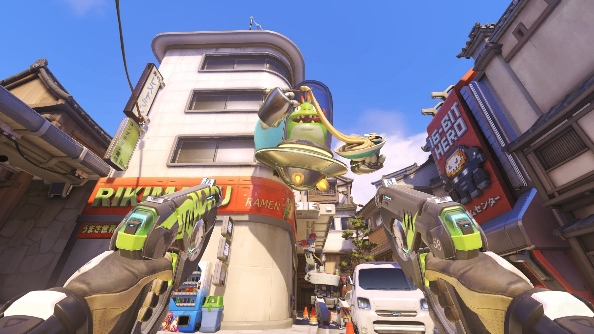 On Hanamura you’ll discover that Overwatch’s favourite ramen noodle brand is advertised by a mascot you’ll recognise from World of Warcraft: the beloved murloc. The green aquatic goblin can be seen on the sides of trucks and buildings, but the centrepiece is this huge model on the side of a shop. Shoot it enough times, and it’ll make the iconic… whatever that noise is.

For bonus points, in this same scene you can see a pixel-art image of Jim Raynor from StarCraft in the screenshot, on a sign reminiscent of Disney’s Big Hero 6 poster. It hangs above the entrance to Hanamura’s videogames arcade. 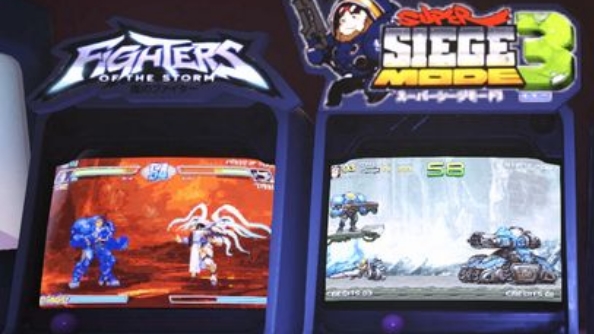 Head inside the Hanamura arcade and you’ll find it filled with game machines sporting names that sound a little familiar. Fighters of the Storm is very clearly a mash-up of Blizzard’s MOBA and arcade classic Street Fighter. On the cabinet’s screen you can see Tychus facing off with Tyrael, or head over to look at the sequel for a showdown between Kerrigan and Garrosh.

Elsewhere in the arcade is the game Soulstone, featuring Diablo characters, and Super Siege Mode, where you can see the StarCraft siege tank in action. And, as a nod to the pre-Warcraft days, you can also find machines playing The Lost Vikings, which is a futuristic sequel to a game Blizzard made back when they were known as Silicon & Synapse. 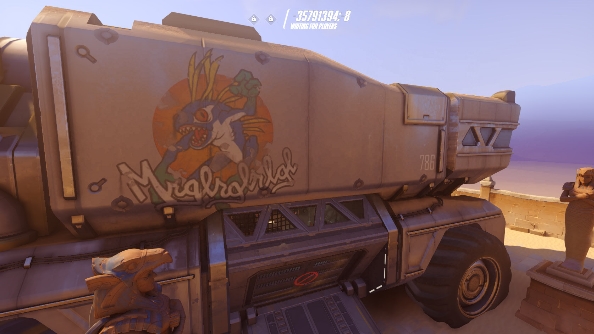 On the side of this giant transporter truck on Temple of Anubis you can see another murloc design, this time beautifully airbrushed rather than Hanamura’s giant model. What’s more, the artist even went as far as to write out that ridiculous noise murlocs make, which apparently is spelled ‘Mrglrglrlgl’. The more you know. 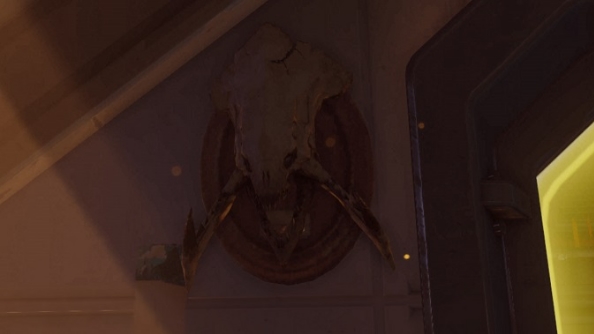 If you’re into big game hunting, the typical (gross) practice of displaying your skills is to mount the head of your prize kill on your wall. Clearly someone on the Temple of Anubis map got into a bit of a scrap with a StarCraft Hydralisk, and has nailed the skull up in the huge murloc-decorated transporter. No doubt it was an epic duel full of gushing bodily fluids and near-death scrapes, but we feel sorry for the Hydralisk. 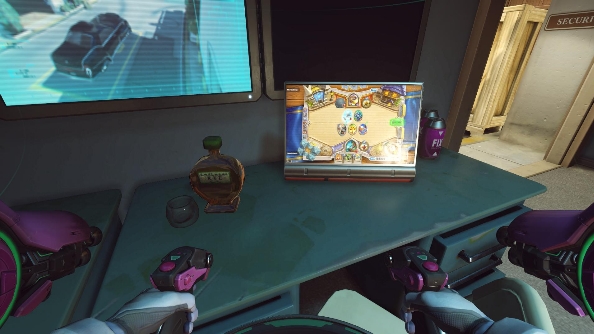 It seems like the denizens of the Overwatch universe are as obsessed with Hearthstone as we are. On your travels across the game’s various maps you’ll be able to find several instances of the game being played. Check out the security office on Hollywood, or see an abandoned game left running on a tablet on the Nepal map. Temple of Anubis and Route 66 has some Hearthstone action to be seen, too. 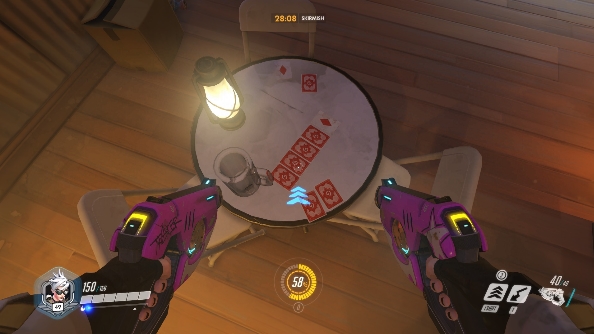 On Route 66 you’ll come across this game of cards. While the fronts are ye-olde-traditional playing cards with boring clubs and diamonds, the backs are decorated with the iconic Hearthstone card design.

Craft from the Stars comic 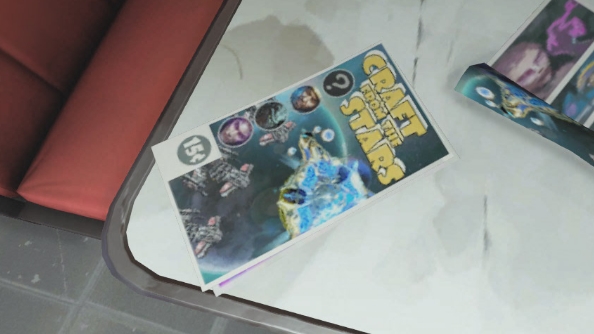 Rifle through the bar on Route 66 and you’ll find these abandoned comics, one of which is called Craft from the Stars. And if that nod wasn’t clear enough, just check the artwork featuring Kerrigan and Raynor on the cover.

While you’re in the bar, why not go and take a look at the drink dispensers, one of which you’ll notice has the StarCraft Zerg logo on it. I can’t imagine zergling juice is a big seller though, honestly. 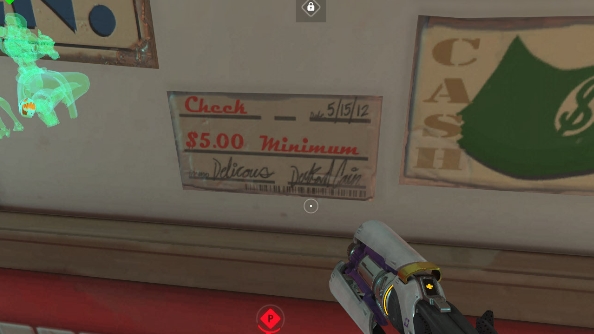 Pinned to the wall of Route 66’s bar is this cheque for $5, signed by the one and only Deckard Cain, Diablo’s scholarly father figure. The barcode below can be scanned (should you have a barcode scanner handy), and the series of lines translates as ‘Deckard Cain lives’. He survived Maghda’s torture after all! 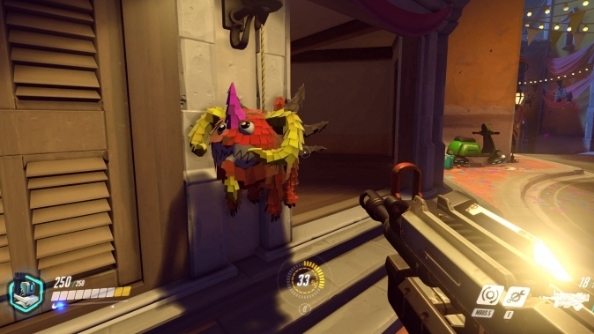 Dorado’s marketplace area is filled with cute Diablo-themed pinatas, the best of which is the hellbeast himself, which you can see sporting a cheeky grin in the screenshot above. A blast from your weapon will burst the pinata, releasing a shower of candy onto the streets. We can’t verify the quality of said candy, as eating it is not an in-game option. 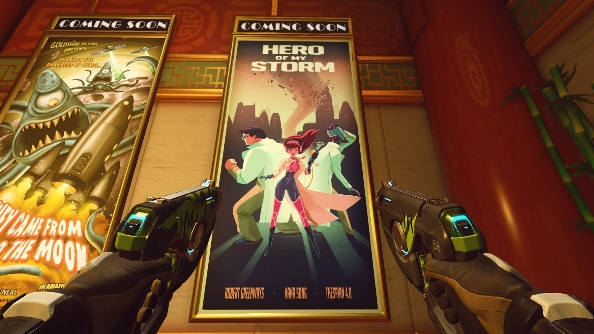 In World of Warcraft Goldshire is a human town that you may have wandered over to if you were ever in the Stormwind area. In the Overwatch universe though Goldshire is the name of a huge, Warner Bros.-like film studio (complete with water tower). Their sound stages and studio lots can be found on the Hollywood map, as well as posters for some of their best movies, including ‘Hero of my Storm’.

You many notice that their logo is the lion head of the Alliance from WoW, too.

Its seems like no matter where you go there will always be the stench of monsters around. That’s true of the Temple of Anubis map, which has the symbol of the Horde chiselled into almost every block of its pyramid structures. The Horde are, of course, Warcraft’s collective of orcs, trolls, dead people, and other such types. We know some people consider them bad guys, but we never thought they’d drop as low as vandalising ancient hieroglyphics.

Have you spotted any other cool Overwatch easter eggs? Tell us what you’ve seen in the comments.