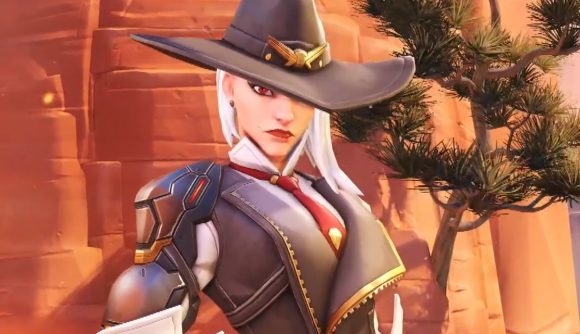 Today, Blizzard revealed Overwatch hero 29: Elizabeth Ashe. She made her debut as part of a new animated short titled Reunion, and she’s a cowgirl with a load of awesome new abilities. We’ve also got teases for the next few Overwatch heroes, but the centerpiece of the announcement is Ashe’s gameplay debut.

We open in a very familiar diner with a jukebox playing the title track – Reunion, if you didn’t catch on. McCree’s sitting there alone with a cup of coffee and a piece of pie until the train rolls in – and falls to the ground outside the door, creating the familiar setting of Route 66. Robbers are trying to take the cargo, led by a woman named Ashe.

Ashe and McCree know each other, and talk history as a standoff mounts – until high noon, naturally. It all comes to a close as McCree tosses some grenades and tosses grenades toward the gang, tying them up neatly for an apparent bounty. Then McCree opens the payload – revealing a feminine, robotic figure, known as Echo.

Jeff Kaplan has a few jokes about who the next hero will be, before confirming that it will be Ashe. Her primary is a rifle, and she’s got a back-up with a shotgun that pushes foes back. She can toss dynamite and shoot it out of midair. At one point, she punches McCree out of an ult. Her own ult summons Bob – the ultra cool robot we saw in the animated short.

If you want to know more about abilities for Ashe in Overwatch, you can follow that link for details. Ashe is playable at BlizzCon, so hopefully we won’t have to wait to long to see her at home.