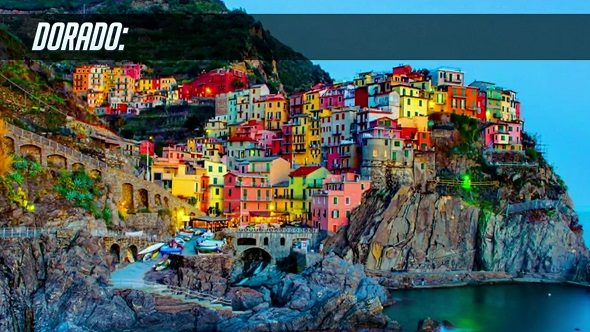 Update February 22, 2017: Overwatch is set on our planet, but it’s a hyper stylised version of our future. One where robots exist, people have crazy powers, there’s a talking gorilla, and Mexico is actually Italy. Wait, what?

We all know Overwatch isn’t going for accuracy. After all, gameplay trumps realism when it comes to creating maps for a multiplayer shooter. Blizzard’s FPS has a garage under London’s Big Ben, for goodness sake. Still, at least it’s actually based on the right country.

If you love Overwatch’s brand of FPS action, check out our list of the best multiplayer games for more online antics.

You wouldn’t expect the game’s Mexican Dorado map to actually be based on a reference photo of an Italian coastal town, but it is. A reference photo that was turned up via a Google Image search, no less.

“So we knew for a lot of reasons that Dorado was an important story location in Overwatch – we had a hero coming up that was from Mexico, we had a movie that we were making called ‘Hero’ that takes place in Mexico, and there was a lot of storytelling we wanted to do in this area,” explained game director Jeff Kaplan during his talk at DICE.

Jeff goes on to say that he and assistant game director Aaron Keller were looking for locations in Mexico for inspiration, starting with Mexico City. Unfortunately, it just didn’t match what was in their heads. They also needed a coastal town so there was a natural edge to the map. It couldn’t be flat and urban, either – it needed to be hilly to fit the greybox they had knocked up.

“We really wanted there to be colour, but we were kind of ignorant about the area,” said Kaplan. “Besides Mexico City – we live in Southern California, so we were familiar with, like, Tijuana and Ensenada, but they weren’t really hitting what we wanted.

“So, being the utmost top researchers in the industry, we went to Google Images and we typed in ‘colourful Mexican town’. We weren’t even looking at the picture, we were just looking at the thumbnail pictures and we’re like, ‘this is it, this is perfect, it’s so awesome, this is exactly the version of Mexico that we wanted to build’. After we had completed the map, about two months after, someone came up to us and said, ‘why did you use Manarola, Italy, as your reference for your Mexico map?’” Oops!

Elsewhere in the talk, Kaplan spoke at length about inclusivity and challenging stereotypes with some characters, while embracing them with others. He also said that he’s very proud the team went against the gruff soldier box art trend of most shooters and plastered theirs with an LGBT character who’s also a woman. He even talks a little about Tracer’s girlfriend revelation in a comic last year, and how it was Blizzard trying to show their characters in ordinary situations.

You can watch the whole talk below. Jeff comes on at around the 48-minute mark.

Original Story January 18, 2017: Jeff Kaplan, the lovely Blizzard man who’s actually the boss on Overwatch but still refers to himself as “one of the Overwatch team”, is giving a talk on the game at DICE this year.

At the keynote in Las Vegas, Kaplan will give a talk titled:”Overwatch: How Blizzard Created a Hopeful Vision for the Future.”

During the talk, Kaplan will address how challenges can be turned into opportunity.

It all takes place February 21-23 at the Mandalay Bay Convention Center in Las Vegas. Details on streaming the talks will likely be announced soon.