Blizzard is offering Overwatch League fans new incentives to tune into the Grand Finals next weekend, with a slew of exclusive sprays and double token drops that can be earned by watching the matches.

While the mere mention of sprays may cause some players to groan, this particular set is pretty damn adorable. There are four unique sprays, and each one can be unlocked by watching a certain number of hours of the games taking place across July 27th and 28th. Here in the UK, all of the matches will take place on Saturday 28th due to our timezone, so get ready for a late night if you don’t want to miss those skins!

Overwatch is, without a doubt, one the best multiplayer games.

Watch 90 minutes of matches on the 27th (12:00AM onwards on the 28th for UK viewers) to receive the Match On! spray. Make it to three hours and you will also get the very cute Watchparty: Gibraltar spray. On the 28th (9PM on for UK viewers), 90 minutes viewing will net you the D.Va’s #1 Fan spray and three hours will get you our personal favourite, the Living Room spray. Remember that you must have your Twitch account linked with your Battle.net account to get the exclusive in-game rewards.

Players who collect OWL tokens will be pleased to know that all tokens earned over the weekend will be doubled, getting you closer than ever before to those swish baby blue London Spitfire skins. Every map that you spectate on the OWL live stream usually earns you one token, with random drops of 100 tokens to a few lucky players each round. Given that each skin costs 100 credits, you’re still going to need to put some time in to kit yourself out in your team’s colours, but this double weekend will be a nice little boost for those in the know. Unfortunately the 100 credit drops will not be doubled. Boo. 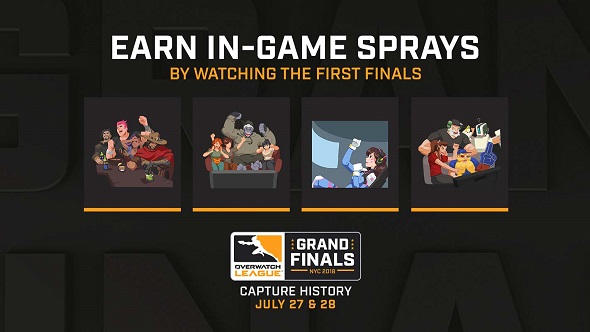 In the early hours of this morning, Europe’s only OWL team, London Spitfire scored another win, defeating LA Valiant in the second week of playoffs. Depending how they fare against Valiant this Saturday morning, the squad may well progress to the Grand Finals at New York’s Barclays Centre for a shot at the Inaugural Overwatch League Trophy.

The other semi-finalists Philadelphia Fusion and New York Excelsior will also do battle this weekend, competing for a place in the finals in the early hours of Sunday.

The champions of OWL’s first season will walk away with a cool $1 million in prize money, while runners-up will take home a smaller share of the $3.5m prize pool.

Earlier this week ticket reseller Vivid Seats revealed that tickets for the Grand Final have sold like hot Peachimaris, outperforming concert events featuring Drake, Elton John and Bruno Mars, as well as ‘traditional’ sporting events such as the WWE Summer Slam. Phil Collins tickets are still going for more, however.