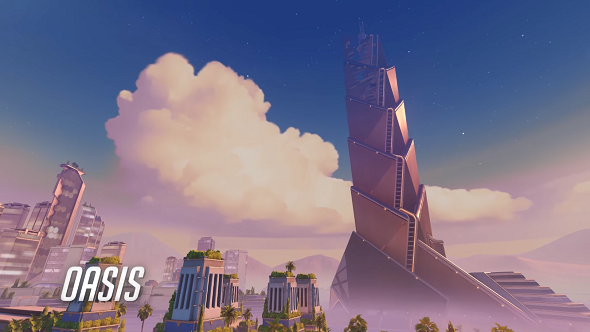 Everyone is now free to run around Overwatch’s new Control map, Oasis, blasting away in a futuristic city wrapped in the heat blanket of the Arabian Desert. Just be sure to watch out for the cars zipping along the highway.

If you haven’t already played or seen the map in the PTR, check it out in the trailer above. It’s definitely a looker, all shimmering skyscrapers, opulent halls, arches and decorative domes.

Its main feature, however, is a bounce pad that lets you take the high ground fast. There is a trade off, though, as you’re essentially a clay pigeon in the transition.

“There’s trouble in paradise as conflict breaks out in Oasis, a brand-new Control map set in one of the world’s most advanced cities, a shining jewel rising from the Arabian Desert,” says the official blurb.

“Researchers and academics from around the region came together to found a city dedicated to scientific progress without restraints – a monument to human ingenuity and invention. The city and its inhabitants are governed by the Ministries, a collection of brilliant minds who possess many secrets that have attracted the interest of powerful organisations from around the world.”

Fight for dominance across the map’s three control points now.