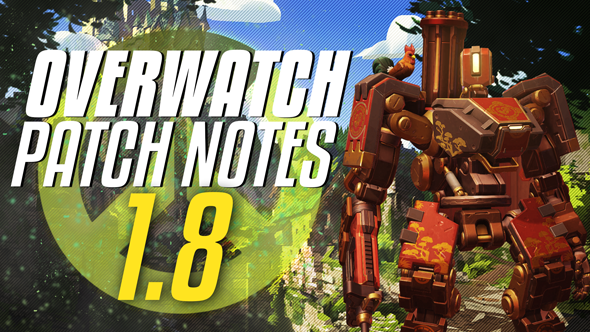 Overwatch patch 1.8 is now live. The headline news, of course, is a major and divisive Bastion buff. Mercy and D.Va get some minor-but-important tweaks, as do a couple of other heroes. You can also invite people into the practice range now, and the latest patch brings the server browser to life, giving custom games a chance to thrive in the wild, as well as possibly meaning the start of something huge. Read on for more.

Developer Comments: “The goal of these changes is to move some of Bastion’s power from Configuration: Sentry to Recon, while keeping its sentry mode a strong option, especially versus tanks and barriers. Overall, Bastion should feel stronger and more flexible with these changes.”

Quite the rework here, and interesting for a number of reasons. The 35% damage immunity makes Bastion incredibly strong and resisting even critical attacks to his weakspots, and more of an emplacement unit against defensive positions. Busting up Reinhardt or Winston shields and holding chokes seem perfect for him now, while Recon mode is a less-bursty Soldier: 76.

We’re at the end of the 1.8 PTR now and, on the whole, the community reception to the Bastion rework has tended to the negative side of mixed. The OP of athread on the Overwatch subreddit argues that new Bastion “will destroy the game”, and has been upvoted over 3,000 times. Author Bujt says the 35% damage resistance, coupled with Bastion’s self-repair and a Mercy or Ana on pocket healing duties renders Bastion virtually unkillable (imagine adding a Rein shield), and points out that some pros who use the PTR to scrim have had to ban him.

Developer Comments:“Previously, there was a minimum distance a projectile had to travel before it could be destroyed by Defense Matrix. This made it nearly worthless in situations where an enemy was right next to your teammate, such as when Roadhog hooks your ally. This change removes that restriction so Defense Matrix should now reliably destroy projectiles regardless of how far they have traveled.”

Exactly how much impact this will have remains to be seen. It’s a great quality of life change, and will mean less feel-bads for D.Va players. Depending on exact usage, it’s a huge change for Roadhog’s kill potential, but obviously requires specific positioning at the time.

No dev comments on this one, but should mean Meis don’t accidentally screw themselves when just trying to self-heal, and stop Mercys getting quite as angry at them.

Developer Comments:“Mercy’s Resurrect has always been very powerful, but it often forces her to sacrifice herself to use it well. There have been changes in the past that attempted to help her in this area, but haven’t done enough to solve it. This change means that once she uses the ability, she will always survive long enough to be with her team again.”

Another QOL change that may hide a large buff. For all the reasons above, this makes Mercy’s most powerful, and somewhat abusive in the early days, ability even better. Whether it can beat the premptive power of Lucio or the killing fury of an Ana nanoboost remains to be seen.

Developer Comments: “The Roadhog changes overall reduce the power of his hook a bit, but his gun is now more effective when not using the hook.”

Looks like Roadhog’s changes weren’t enough to take him down as much as Blizzard would like. Admittedly he does feel rather useless when you’re doing anything but hooking for a headshot. Hopefully this keeps him out of bottom tier while removing his OP tools.

No developer comments to clarify, but we’re assuming this is a minor buff stemming from wanting more accurate animations. Don’t expect it to make Torb a first tier pick.

Developer Comments:“Winston’s head hit volume was just abnormally big, making him take more damage than he otherwise should. This change brings it more in line with other heroes.”

As with most tanks, taking crits is the main way to get Winston down. The monkey lad has never really been top of the mountain since high-level play kicked off in earnest, and this change is probably not going to buff him up too much, but is the start of a process to get him relevant.

As part of the patch, Blizzard are updating various abilities that have auto-targetting mechanisms to be more configurable. Essentially, you’ll be able to scale how quickly it snaps to another target, based on how close to the center of that target you’re aiming. Each of the following abilities will have individual options.

When attackers outnumber defenders while taking a control point on Assault, Escort and Assault/Escort maps, the defenders’ respawn time will slowly increase until it hits a maximum value or the defense manages to gain the upper hand.

Developer Comments: Until now, stalling an attack by repeatedly throwing yourself at the point has been a common defensive strategy on Assault, Escort and Assault/Escort maps – even when the attackers have a decisive advantage. Typically, this tactic doesn’t change the outcome of battle; it simply delays the attackers’ progress.

A second gate no longer closes after the payload passes through the castle doors. Instead, rubble from the damaged doorway partially blocks the entrance.

Developer Comments: Once the offensive team gets through the castle entrance, the map becomes very heavily stacked in the defense’s favor. This change will give the offense more entrance options, which should improve the map’s overall balance.

As discussed by us and Kaplan, this is a huge deal, and could lead to some massive changes for the game, as well as better testing all around. It’s already brought the PTR down once due to server problems.

Starting today, every player can create their own, unique Overwatch experience and share it with their friends, their teammates, or the entire world. Check out the video above.

Looks like you can invite people into the practice range with you now. Here’s the evidence, courtesy of Anionic on twitter:

So this is a thing now… pic.twitter.com/ACzkuXbqzU

Skill ratings below 500 will no longer be displayed.

Developer Comments: We’ve noticed that some players have been deliberately throwing their matches in an effort to reach the lowest attainable skill rating. We obviously don’t want to incentivize this behavior, because Competitive Play works best when everybody is trying.

Finally the usual round of bug fixes and squashes.

That’s the official notes. We’ll see you next month for patch 1.9.