It’s the end of the month, which means it’s time for another round of stats. SuperData research, who focus on digital markets, have announced that Overwatch’s monthly active user count for August – i.e. how many people logged on and played a game – was higher than ever before.

This comes after a bit of a down period for the game, with some onlookers wondering if it’s time was over in the face of the omni-popular PlayerUnknown’s Battlegrounds.

Here’s what’s happening in the next Overwatch patch, 1.16.

SuperData say the release of Doomfist, new game modes, and Summer Games coming back are to thank for the new record. No specific numbers are given, but it’s impressive that it beat out previous peaks over a year after launch.

However, PlayerUnknown’s Battlegrounds is the unsurprising but very real winner of the month, hitting fifth in the top grossing titles chart behind the world’s various free-to-play titles. World of Warcraft, CS:GO, Dota 2, and Overwatch also fill up the list, with League of Legends hogging the top spot as always: 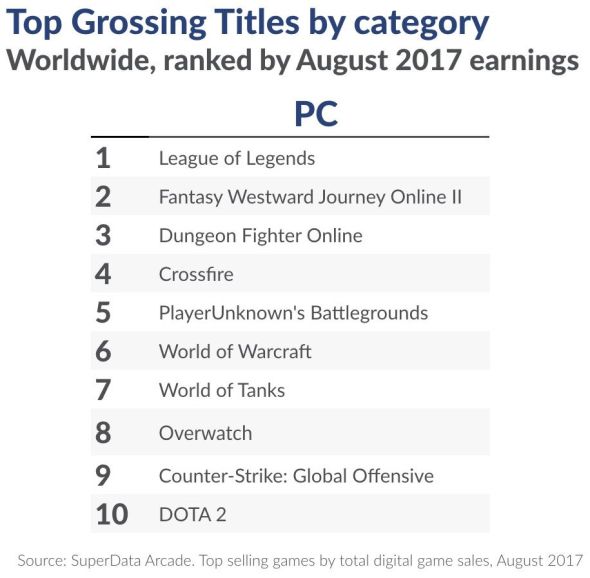 Hearthstone also had a great August, hitting a new “all-time revenue peak” with Knights of the Frozen Throne coming out and resulting in a 15% increase over its previous top month. That’s a lot of legendaries.

In wider terms, free-to-play helped an 11% overall digital market growth year-on-year to $7.9 billion. Premium PC (full-priced games) is down, despite PUBG, since last year saw No Man’s Sky’s launch and Overwatch’s first big event bring in big numbers, while MMOs saw a dip since there was no World of Warcraft expansion to buoy it.