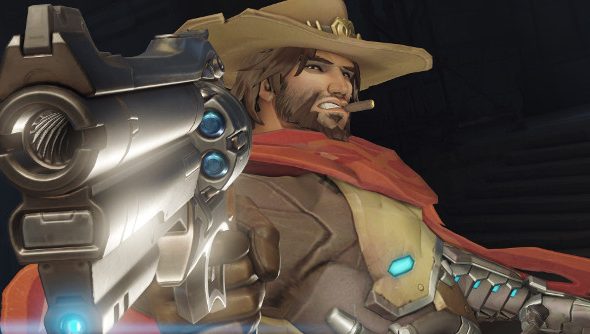 Update May 20, 2016: Blizzard have released the official release times for Overwatch, and they match up with earlier speculation.

In response to community interest, Blizzard have released the official launch primer for Overwatch. This details the global simultaneous server go-time, as well as explaining exactly how installation will work on the day. Details below.

Be ready on release day – whenever it is – with the best Overwatch characters.

First, what you’re here for: when the game becomes playable. It’s simultaneous worldwide, and here’s the time in various regions:

As always, if you don’t see yours, Time Zone Converter is the best way to work it out. Here’s a map from Blizzard too: 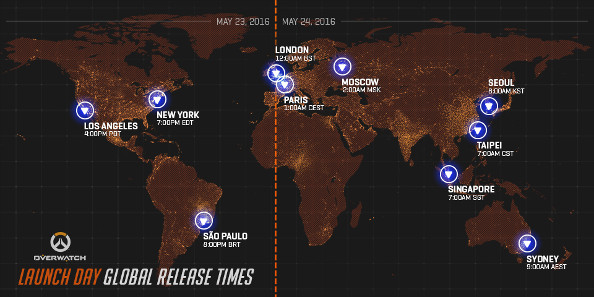 As for installation, support and so on, check Blizzard’s official post. There’s no mention of a pre-load in there, though if you played in open beta and have kept the game installed the download will be significantly smaller. Normally I’d say expect server issues, but given the beta managed to support nearly 10 million players, it shouldn’t(™) be a problem. Either way, the folks at Blizzard will be pulling a customary launch-day long-one to keep things moving. They’ve also announced that all Battle.net accounts will get a free Battletag rename before launch, presumably so we can all call ourselves things like ReapersCousin, Widowtaker and ThatOneBastion.

Elsewhere in the Oververse (we’ll keep working on that one) the latest comic has been released, featuring the rocket-jumping, security-keeping Pharah going after a rogue AI. Blizzard also announced that the next cinematic, focusing on Soldier: 76 and titled ‘Hero’, will release on Sunday at 10:00am PDT. Since it’s in-theme, here’s when that is elsewhere:

Original story May 19, 2016:The Overwatch release date is May 24. You know this, I know this, every banner ad and trailer you’ve seen has told us this. However, according both to various retailers and one of the developers on Twitter, copies will be reaching homes and shelves, as well as servers going live, the day before – at least on Pacific time.

First, the retailers. American game-seller extraordinaires Best Buy, Amazon and Gamestop are all currently showing release dates of the 23rd for Blizzard’s upcoming shooter. They clarify that it won’t be playable until the 24th – more on that in a second – but Gamespot got a direct quote that they plan to sell from opening hour on the 23rd. As they put it, to make sure folks can start playing as quickly as possible.

Which may be sooner than even they think. Posting on Twitter on Monday, Game Designer on the Overwatch team Jeremy Craig said that “a week from right now” the Overwatch servers would be up. Responding to a community question as to exactly what he meant, he tweeted this:

Despite receiving attention from the community, this post has not been deleted nor expanded upon by Blizzard. It would match up with a midnight launch in the UK, but a 1am go-time for most of Europe, as well as various slightly odd times for the rest of the US. More normal for Blizzard would be a staggered launch in various regions at midnight their local time, or global simultaneous launch at midnight for either the European office (CEST) or American office (PDT). This matches neither.

It would be a fairly sensible time to launch, however. It means that the game is live in all regions on the 24th but everyone gets to start playing at the same time, and there’s still actually people in the office to deal with inevitable problems, though they’ll likely end up pulling the late shift. We’ve contacted Blizzard for comment and clarification, and will update when they get back to us. For reference, here’s when 4pm Pacific time is in various regions: