“We felt like once you’d played Uprising ten times you were done with it. You’d seen everything it had to offer,” Adrian Finol, principal software engineer on Overwatch, says about Blizzard’s 2017 surprise PvE mode. “For Retribution we took that to heart. We wanted you to be able to play as long as you want.”

Want more Blizzard? Check out our huge interview with the Overwatch team.

It is clear that lessons have been learnt in Retribution, this year’s co-op event that tasks players in escaping from the forces of Talon, Overwatch’s arch enemy. Rather than a series of rush waves, Retribution is a collection of cinema-influenced moments. Enemy soldiers rappel from rooftops in a shower of glass splinters, snipers swing on grappling hooks across the streets of Venice, and assassins pin your teammates to the ground with vicious blades. If you’ve ever imagined what a mission in an Overwatch single-player campaign would be like, chances are you pictured something like this.

Of course, Retribution is not the Overwatch campaign. It’s a ten-minute long mission with simple objectives and an identical structure with each playthrough. The repetition and restriction of this format is something Uprising struggled with, too, but Blizzard had ideas on how to make it more compelling for Retribution. 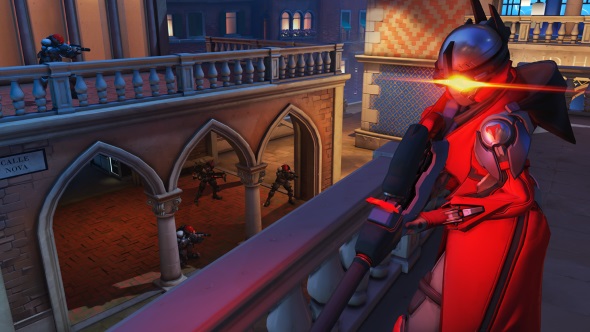 “We felt like there was just too many objectives [in Uprising],” Overwatch’s assistant game director Aaron Keller reveals. “We were just throwing people all over the place. Hack these three things, then do this payload, do a holdout, push the payload through the streets…”

“It wasn’t very clear,” Finol says. “Every time we asked someone why you’re hacking this console, they were like ‘I don’t know, because I have to hack the console’. They had no idea what they were doing story-wise.”

In response, Retribution is more straightforward – you simply need to make it to the extraction zone. The mission’s complexity is, instead, delivered via more intricate combat encounters, and a far more engaging story that provides context for a pivotal moment in the Overwatch lore.

That narrative focuses on Gabriel Reyes, Blackwatch’s super soldier and the man who would one day become Reaper. “You start to see some of the changes that he goes through,” Keller explains. “It’s a really big story for Overwatch. As Gabriel Reyes turns into Reaper and starts to go bad, it has profound consequences for the whole Overwatch organisation. Eventually it ends in the downfall of Overwatch and Gabriel Reyes becoming a member of Talon.”

Game director Jeff Kaplan felt it was vital that the lore honed in on Reaper’s past. “We think it’s really important to show that Gabriel Reyes/Reaper is a much deeper character than people realise,” he says. “I think in some of the animated shorts he’s come across as a little bit one-sided. We want people to see that there’s a lot more to him, and understand how he gets to that place.” 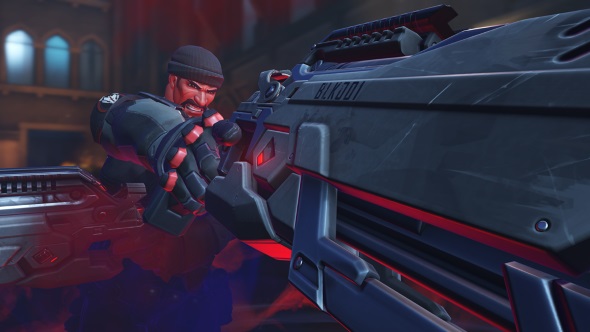 While Reaper is the key component of the hero squad, much of your focus in Retribution is firmly on the agents of Talon. Kitted out in futuristic white armour and charging around like Stormtroopers – ones who actually know how to aim a rifle – the Talon forces are finally portrayed here as a militaristic force ready to tear the world apart, rather than the shadowy cabal we’ve previously seen in the comics.

“We knew we wanted to have another group of enemies to fight against,” Keller says. “I think the Omnics are really cool, but Talon are kind of like the arch enemy of Overwatch, so just having them in there lends this sinister, badass feel to the mission.”

Talon field five varieties of soldier in Retribution. Troopers and enforcers make up the backbone of their army, but they’re reinforced by ‘specials’ – elite units that work as puzzle pieces for players. There’s the teleporting assassin, who can pin enemies to the floor with her blades; a sniper who comes packing the same kit as Widowmaker; and a heavy assault trooper that wields two colossal miniguns and can charge, Reinhardt-style, into players.

Kaplan is a fan of the assassin. “If you’re a really talented marksman and you have the ability to shoot her fast enough, you can kill her before the group is under any threat whatsoever,” he says. “If not, she goes into this mode where she really pursues a single person on your squad and pins them down. You need to do enough damage to her before she gets up.” 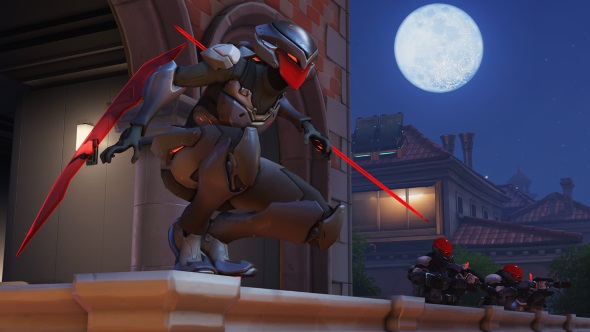 If that sounds like the hunter from Left 4 Dead to you then that’s no coincidence. “Left 4 Dead, of course, is a huge inspiration,” Finol says. “It’s a four-player PvE game and we learnt a ton from that game.”

“Think about [the specials] like puzzle pieces,” he continues. “When an assassin spawns you have to work out how to solve it. Similar with the heavy: when the heavy assault spawns you’re like ‘Oh boy, we thought we were safe and now we have to deal with this massive wall’. So they all serve the purpose of puzzle pieces in this massive encounter.”

“It also helps a lot our designers with creating encounters,” Keller adds. “The more specials we have, the more pieces we have to play with, and the more combinations of things we can do.”

This is shown at its best in the higher difficulty levels of All-Heroes mode. While Story mode has a set order – you’ll always encounter the sniper as you exit into the streets, for example – All-Heroes modes mixes up the order of encounters. Different combinations of special units will keep you on your toes far more than Uprising’s rigidly-scripted Omnic waves. “It’s really cool because players are always trying to figure out how to deal with one of the specials,” Keller says. “But when you encounter two of them at the same time it springs a different kind of crazy dynamic.”

Talon also put up much more of a fight than Null-Sec robots. “The assassin makes you feel like you’re being hunted, and the sniper divides the space in two and makes you think about how to see through that space,” Finol says. “We even added things to our trooper and enforcer units so they know to stay close to each other. They form little packs with a leader, and they’ll die and roll out of the way.” 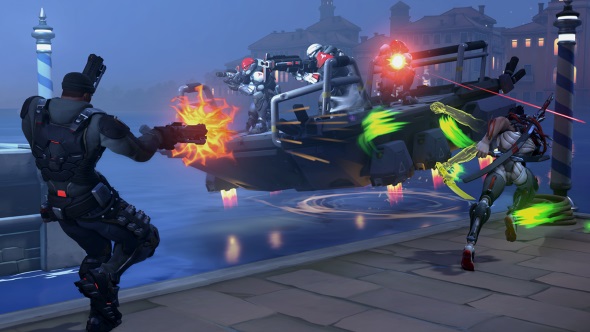 Trickier AI demands stronger strategies. Kaplan notes that the Overwatch development team have a go-to tactic to fend off the assassin: “We’ll play Torbjorn and Symmetra and build a turret nest around the squad, and then tell everyone to stand near the turret,” he reveals. “That way, when the assassins come to get us, the turret really saves us.”

The mission takes place on the new Rialto map: a winding series of streets that snake through the Italian city of Venice. Debuting as a PvE map for Retribution, it will soon be available as a PvP Payload map in the core game. Creating a map that would work across both modes was not an easy task for the team.

“We had a lot of ideas on how hard it would be ahead of time,” Keller says. “We thought that a PvE experience would never work in our PvP maps, but the PvP version of the map actually ends up playing really well for the mission. I think part of it was just smart unit design and smart AI.”

“Another reason is that we have a specific vision for what Overwatch PvE combat is,” he continues. “It’s similar to our PvP combat: very fast paced, it takes a whole team working together in strategic way in order to be successful, and it always needs a quick read of the space that you’re in in order to engage the enemy effectively. That’s one of the major reasons that our PvP map actually works really well for our PvE combat.” 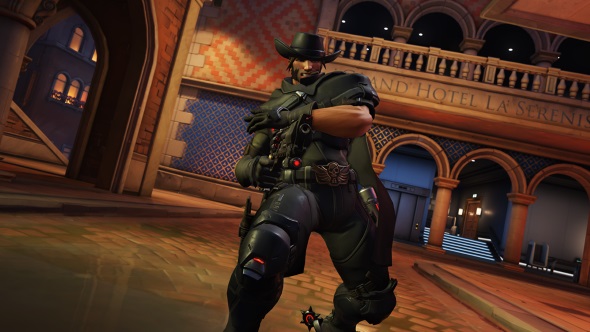 It’s easy to appreciate the look and feel of Rialto in Retribution, but there’s little to suggest what surprises it offers for PvP. According to Keller, the highlights are all in the chokepoints: “There’s two sequential corners in this map – it’s a big U that you have to travel around before arriving at this really cool view of one of the canals in Venice,” he reveals. “We call it Devil’s Corner because it’s so hard to push the payload around this section. There’s all these flanking routes through the buildings there in order to enable the offense and defence to circle around and get an advantage.”

The map is also home to the kind of environmental hazards you’d expect from Control Point maps rather than Payload. “We typically don’t do that, but this being Venice you need to have some water and you need to have canals in order to fulfil the fantasy,” Keller says. “Right in the middle of the map there’s this big canal that cuts through the space, and the payload has to travel across a bridge. It’s a great opportunity for characters like Lucio and Pharah to bop people into the water.”

“One of the really cool things here is that there are gondolas travelling across the canal, so if you do get knocked off you’ll have the chance of landing on one of those and getting lucky,” he adds. “Then you’re able to climb out and push on.”

Overwatch may not have been built to be a PvE game, but Retribution proves that the development team absolutely still have the skills from their past lives working on the likes of World of Warcraft, Diablo, and StarCraft. They’re still learning, but – as the leap in quality from Uprising to Retribution proves – the Archives event promises to be the real highlight of Overwatch’s event calendar, year in, year out.