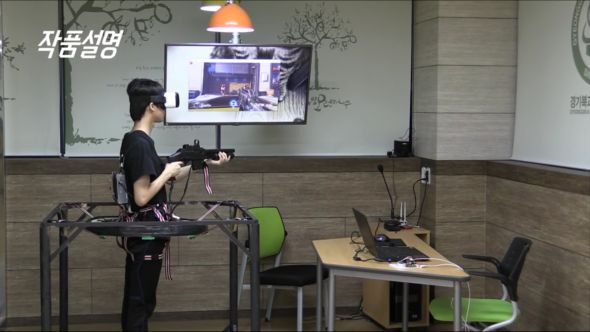 A science club at a Korean high school have built their own virtual reality gaming rig and used Overwatch to demonstrate its capabilities.

No home-made omni-directional rig? Check out the best VR games on PC.

First-person shooters are one of gaming’s most popular genres, but they present a challenge for VR game designers. The sensation of feeling your avatar move as if running is an especially nauseating one if you’re standing still and using a keyboard or controller. Using teleportation to move is one solution, which obviously has a huge impact on the rest of the game’s design. Using real-life movement as game input is the alternative, but obviously requires a very different – and prohibitively expensive – bit of kit, such as theVirtuix Omni, with its low-friction treadmill.

The Korean students’ rig is similar to the Omni, though it doesn’t have the treadmill and relies on the hip sensors instead; movement is handled entirely by leaning in the desired direction. It’s also capable of picking up jumping and crouching. The students use Soldier: 76 to demonstrate, and can trigger his Tactical Visor ultimate ability by touching the headset, just as Soldier does.

There’s a bit of input lag, and there’s little doubt you’d get creamed by anyone playing ‘normally’, but against other players with the same equipment this looks pretty good fun. That it was built by high school kids, presumably with the sort of budget you’d expect, is even more impressive. Perhaps it needn’t be so expensive to get a conventional shooter in VR after all?

Many thanks to Akshon eSports.