Zarya takes a starring role in Searching, the latest Overwatch comic. A direct sequel to the Sombra short, Infiltration, it features Zarya facing her prejudice against Omnics head-on. Alejandra, the young girl from the Soldier 76 short, also takes a starring role by helping Zarya track down Sombra.

For the pro side of things, here’s what’s happening in the Overwatch League.

Hey, it’s a short comic, so I won’t spoil any more here. You can read the full comic here. We’re awaiting the usual motion comic version, but it doesn’t appear to be here just yet.

Original Story, September 26: Another new Overwatch comic is coming out on Wednesday. It’s the direct sequel to the Sombra short, Infiltration, and stars Zarya. She’s hunting down the purple-skulled one with a bit of Omnic help, so the tale is appropriately titled Searching. Want to know more? We’ve got the cover and first page for you.

Here’s the cover, with Zarya and her new robot pal: As you might have noticed, Zarya’s not trying to rip not-Zenyatta’s tiny little head off his shoulders, so she’s calmed down a bit from her in-game attitude of “Omnics = bad guys.” Why? Here’s the synopsis:

“Aleksandra Zaryanova is in over her head when Katya Volskaya sends her to eliminate the elusive hacker known as Sombra. At her wit’s end, Zarya reluctantly teams up with an omnic hacker. Butting heads all the way, they hone in on their target. Through strife, Zarya begins to realize that she will have to reassess her worldview about omnics being uniformly evil. ”

Turns out you shouldn’t judge people just because they’re actually robots. I’ll keep this in mind for the uprising. Anyway, it really is a direct sequel to Infiltration, with the first line of the comic kicking off exactly where the short ended: 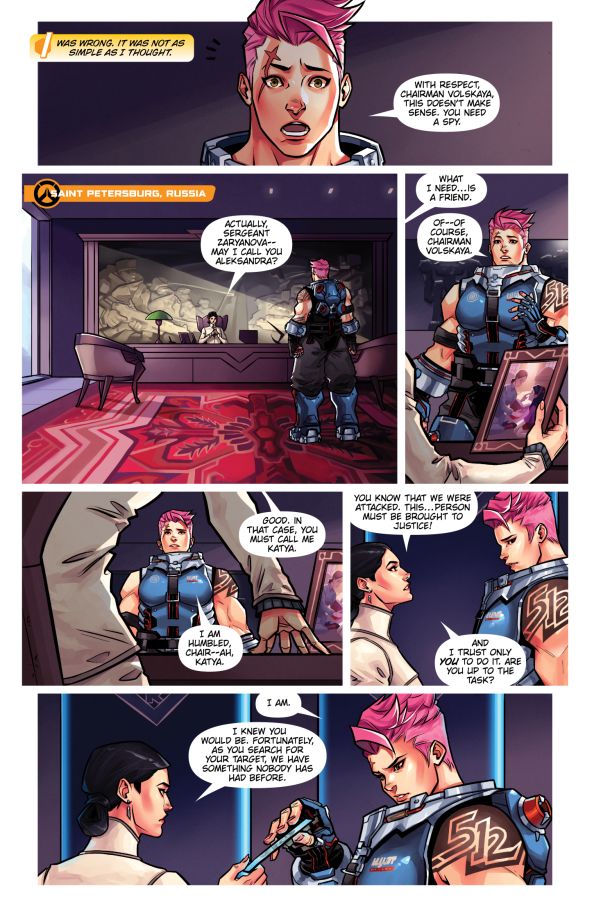 The rest of the comic will arrive at some point on Wednesday according to Blizzard. Expect it around 10:00 Pacific (13:00 Eastern, 18:00 BST) which is when comics have gone live in the past, including the last Roadhog comic. Do see the video above for further speculation.