A series of credible leaks for Overwatch’s upcoming Halloween content have now resulted in the next hero, Sombra, being unveiled a few weeks ahead of time as well as details of a new Brawl.

Get to grips with the rest of the team with the best Overwatch heroes in each class.

Sombra has been teased for months in an increasingly abstract ARG involving skull motifs and code-breaking for fans, ultimately trailing off with the URL amomentincrime.com displaying a download percentage countdown set to end on or around October 18.

However last night, a user on the Reddit Overwatch community posted a screenshot of what appears to be an internal Blizzard communication about the hero including her design and snippets of text about what else to expect when she arrives. Her design appears similar to a member of the old Overwatch team from various bits of concept art such as the woman on the far right below. 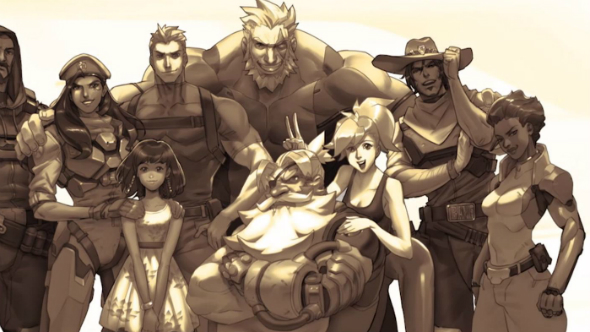 The text below the picturespeaks of a potential new game mode for Brawl in which players must “[p]rotect the castle doors from the Zomnics and Dr. Junkenstein’s evil allies.” Given Omnics are the name for robot citizens in the Overwatch world and the Bastion short film has a bunch of red-eyed sentrybots assaulting Eichenwalde you can probably see where this is going. Dr. Junkenstein, as seen in the comic leak from yesterday, is a mad scientist Junkrat so perhaps he summons abominable pals to act as bosses in the suspected horde mode.

The survival game mode will also have “three different difficulties – the harder the difficulty, the more points you can earn!” What points are is a mystery, however if the uproar at being unable to buy Summer Games specific skins with any in-game currency has been heard, perhaps you can use points to buy whatever Halloween skins you’re missing. Or they could just be XP.

Sombra has been characterised as a hacker, pictured with an Uzi or other sub-machinegun, and it is theorised she’ll be able to change the way enemies and allies play either by buffing weapons or disabling abilities and pausing their cooldowns. What part she has to play in the Brawl is unclear, given Dr. Junkenstein appears to be running the show.

The screenshot was removed by Reddit mods several times for displaying a partial URL in the browser which appeared to be part of the Blizzard internal network, but can now be seen with that cropped out.

Further elements in the text refer to backstory either confirmed or alluded to by Blizzard throughout the ARG, including her ties to the Los Muertos gang in Mexico and being recruited by the Talon organisation.