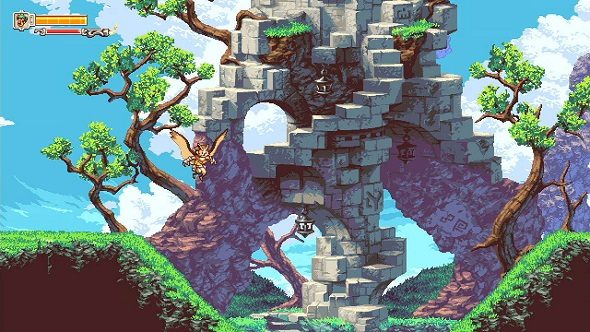 Hoping to raise more money for various worthy charities, the Humble Indie Bundle is back for its 18th edition. Featuring titles like Goat Simulator, Steamworld Heist and Owlboy to name but a few, this bundle is perfect for those looking for engrossing single-player experiences.

For more high-class indies, check out our list of the best PC indies.

At the starting level of this bundle are Ziggurat, Windward and Steamworld Heist. Turn-based tactics fans will be right at home with Steamworld Heist’s bullet-bouncing gunplay and charming steampunk aesthetic. Ziggurat combines roguelites with first-person shooters, to create a super streamed dungeon crawler in the style of Hexen or Heretic. If you’re looking for something a bit more relaxing to play with friends, Windward is a co-op sailing adventure where you build your own shipping company and take to the high seas to make money and occasionally sink a pirate ship.

If you pay around an average of $7.46/£5.76, you gain access to all episodes of Kentucky Route Zero, the GOTY edition of Goat Simulator and Beholder. There are more games set to be added to this tier, so come back on Tuesday to see what else has been added.

Beholder is a grim one, tasking players as the manager of an apartment complex in a totalitarian state, who must spy on their tenants to gain information for the regime. Like Papers Please, you can just be a cog in the machine, or you can actively fight back and withhold information from your masters. If you’re looking for something a bit more surreal, Kentucky Route Zero will have you meeting with all manner of strange characters as you travel its underground cave network. Goat Simulator is then the polar opposite of these two story heavy experiences, as players fling a physics-defying goat around a series of wacky sandboxes.

For those who pay $13/£10, you’ll gain all of the previous mentioned games, along with indie-smash Owlboy. A game almost a decade in the making, this gorgeous indie platformer has a humanoid owl defending his home from invading sky pirates. While he cannot fight directly, the titular Owlboy can carry round his allies to act as his gunner.

As a bonus, you’ll get both the Owlboy and Kentucky Route Zero soundtrack if you pay over $13/£10, along with a 10% discount on the Humble Monthly Bundle.