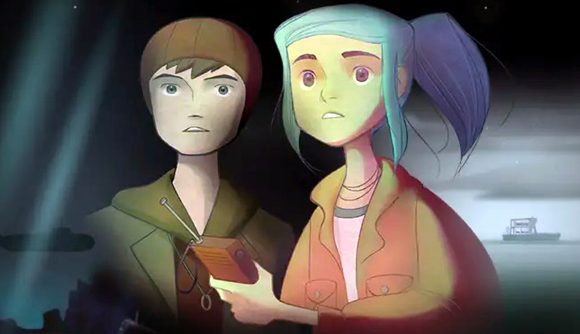 Spooky indie adventure Oxenfree is being invaded by the villains of the game’s upcoming sequel, Oxenfree II: Lost Signals. This is happening thanks to an update for the original game that adds a load of Easter eggs for fans to find, which tease the events of next year’s in-development adventure.

Back in July, the first Oxenfree received a mysterious update on Steam, where developer Night School asked players to “report any unusual radio signals” – along with a link to the sequel. Another patch appeared just a few days ago, with the notes stating that “something is invading the radio waves” of the game – and how the team had “failed” to “stop signals from breaking into the original Oxenfree”.

Players quickly began to discover that these radio signals were teasing the events of Oxenfree II, and were acting as a setup for the villains of the sequel – called the Parentage. Since Oxenfree deals with a lot of time travel shenanigans, this approach makes perfect sense – and suggests the Parentage is so powerful it’s begun invading the events of the original game.

“The rules of the world, and the rules of the universe, allows things that happen in the future to reverberate into the past, and vice-versa,” Oxenfree II’s lead writer Adam Hines told IGN. In the sequel, new character Riley Poverly is deliberately trying to uncover the dimension-twisting stuff the first game’s characters stumbled into. “Of course it’s all going to go horribly wrong,” Hines says, with these new Easter eggs offering hints as to how it happens.

We tried to stop it. We failed. Signals are breaking through into OXENFREE and we can't block them, no matter how many patches or changes we m🀫ke to the game. We're in troubl🀰. All of us.https://t.co/IA8J3v2koB pic.twitter.com/sXR7hAHsse

Oxenfree got a lot of attention for building hype through an ARG, which even ended up tasking players with going to a real-world location. It seems Oxenfree II has begun something similar – but as Night School is admitting to these radio signals, there’s probably going to be more ARG stages that the studio’s letting the fans find for themselves. There’s still a long time to go until Oxenfree II: Lost Signals releases in 2022.