Pagan Online comes at you fast. Click the start button and you’re immediately whisked away to a world that hums with colour and Slavic mythology. Straight after picking your hero you get a snippet of the story before learning how the game works through that character’s skill set in a tutorial. Within minutes you know what’s going on, what you have to do, and how to do it. Go go go.

Once you finish that first deed you’re taken away to a social hub called the Pantheon, where you then find out the gods are missing – it’s your job to find them. Before your feet truly touch the ground, though, you’re off again at a grander pace to start your adventure, learn more about the game, and snap up some loot.

The swiftness that Pagan Online’s opening unfolds at not only sets the tempo for the rest of the game but reflects everything that makes it worthwhile, and yet also slightly lacking in places. It’s a thrilling and easily accessible ARPG that wears its love of Diablo on its sleeve, but it leaves out some of the personality that makes each one of Blizzard’s characters stand out from one another.

Pagan Online’s mission design will be familiar to Diablo and Warframe fans alike. You battle your way through dungeons watching loot burst out of minions like luminous confetti as you go. Once you decide if any of it’s worth plucking to boost your stats, you’re onto the next horde to do it all again. So far, so Diablo. Where you get the feel of Warframe, however, is the speed that missions unfold at. Each outing takes you between eight to ten minutes to complete, which makes it more of a sprint than a marathon.

That speed is one of the best parts of Pagan Online. Everything flows wonderfully, and it’s easy to jump on for a few runs if your time is in short supply. Developer Mad Head Games also manages to maintain a sense of accessibility without losing the feel of a good challenge. Swathes of minions populate every room and will send you back to the Pantheon if they kill you. If you want to complete each level, you need to manage your abilities and healing items economically, so that when you arrive at the boss you’ll be ready to give it that final push. 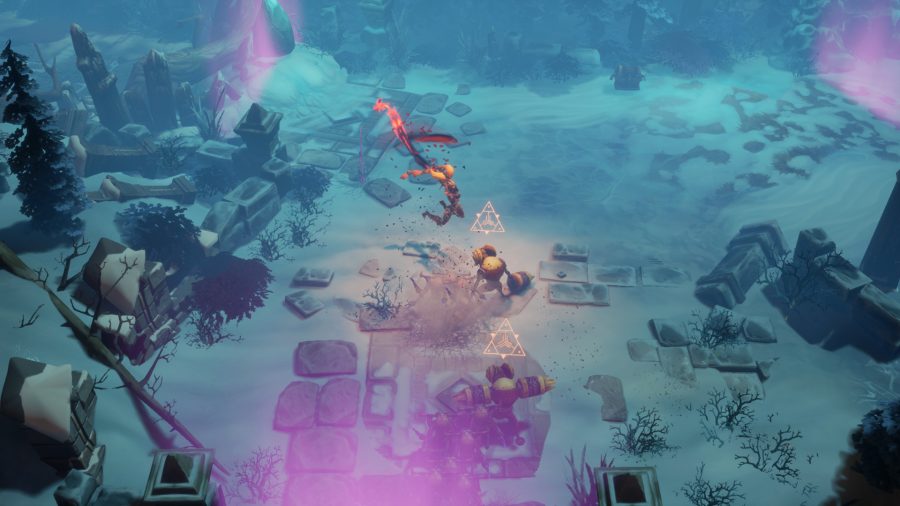 There’s certainly enough challenge in Pagan Online, and it amps up so that, later in the game, you’ll probably have to run a level a few times to complete it. Luckily, an element of randomisation helps to keep even your fourth or fifth run feeling fresh. Each room has the potential to present a different challenge, from an airborne and unhittable foe that rains down terror on you while you try and clear the room, to a golden chicken you need to protect for more loot.

Combat also feels satisfying, but only after you spend some time getting to grips with it. Controls are WASD which, admittedly, means more wobbling about if you’re used to the point-and-click style of movement that’s common in traditional ARPs, but it comes in handy as enemies can do a real number on you if you let ‘em – no facetanking here. If you do get in a bad position, you’ll want to make use of the seven attacks available to each hero, all of which complement each other. Anya, for example, can stun people with one attack before leeching life with another.

It’s in this approach to character design that you can see the influence of MOBAs creeping in beyond the obvious sway the genre’s had on Pagan Online’s pacing. Again, it’s a setup that lets you slot the game into a busy life, but it won’t be to everyone’s liking. The abilities of any given hero are set in stone to reflect their personality, which is similar to how Smite’s Gods work, disallowing any experimentation with the classes. Anya is a vampiric combo fighter who does best at range but is quite squishy – she will always work that way. You do get access to her upgrade tree, but it’s there to boost the power of her skill sets, rather than change her dynamic.

One thing I miss from other online games when playing Pagan Online is watching my character’s appearance change as I upgrade them. The attack and defence stats of any given hero can be boosted with items, sure, but the only way to alter the way they look is with skins. This is most apparent when you touch down in the Pantheon and see swarms of identical heroes strolling around. One of the joys of Diablo is starting with a significantly exposed canvas of a hero and turning them into your own work of armoured art.

It also puts me in mind of Destiny. When you touch down in that game’s Tower, you get a sense of where a player has been and what they’ve achieved simply by the kit they’re wearing – be it a shader collected from a raid, or a piece of armour won from the Crucible. More than that, it’s also an excuse to incite player interaction. One of the few certainties of Bungie’s space romp is, if I touched down in the Tower with a Raid emblem equipped, Guardians would pester me to help them out. And, sometimes, I would – as that’s the kind of community the game has cultivated.

It’s still early doors for Pagan Online, and it’ll be exciting to see where it’ll go from here. Online multiplayer is on the way, so the fact that you’ll seldom find the Pantheon empty of players is a promising sign that it’ll take off. For now, though, what is apparent is that Mad Head Games has crafted a game that’s hard and fast, but also accessible. Some of the personalisation and skill tree options it leaves out may not be to everyone’s taste, but in a genre where Diablo and Path of Exile rule the roost, Pagan Online succeeds in offering a challenging yet fresh experience that’s respectful of your time.