In many ways, P.A.M.E.L.A. is the game I would make, if I woke up one day and suddenly understood every baffling sub-menu of the Unity engine. Then again, it’s probably the game that anyone who likes Looking Glass Studios and Irrational’s output would make; it’s atmospheric, dystopian, and discourages unconsidered combat.

I’m not sure I would have called my game P.A.M.E.L.A., but then I don’t know all those Unity sub-menus, do I? Feast your eyes on this new trailer, available here on PCGamesN first:

Above all, NVYVE’s game excites me because it’s a game that appears to focus more on allowing the player to inhabit a space and absorb the story through the environment, rather than by bombarding them with combat scenarios.

“That’s a pretty astute observation, actually,” says lead designer Adam Simonar. “We’re filling this world with this crafted, believable sci-fi universe, but as a player you’re able to experience it at your own pace, whether you want to be exploring the beauty of the world, whether you want to be focussing on the combat, scavenging, that sort of thing.”

There’s a lot of game to get a handle on here: it’s an open world in which you’re free to ramble at your own pace. There’s a resource management element, and you’ll need to keep an eye on how hungry, thirsty, and tired you are.

But it isn’t the kind of sprawling, unpopulated sandbox environment you naturally associate with those concepts. Simonar and his five co-developers at NVYVE have taken a resolutely bespoke approach to every environmental detail in their fallen Utopia, Eden. “We don’t take a building block approach where we’re re-using stuff,” says Simonar. “Everything we build, from little corner stores, to apartments, it’s all designed completely from scratch.” In that respect, P.A.M.E.L.A. has the look of a scripted FPS.

Eden’s depicted primarily through near-future architecture, all flickering neon lights and shiny surfaces – there’s an aura of fondly remembered ’90s-’00s cyberpunk titles to it. You don’t have to squint to find System Shock, nor Bioshock, here.

In fact, while Ken Levine’s crumbling monuments to humanity’s hubris may be homaged visually, the accompanying rogue AI plot is subverted in NVYVE’s debut. The game’s rather baffling title refers to an artificial intelligence who once ran Eden, and now looks to you, the only human left alive and sane, as her only hope to survive. For once, you’re not dealing with a malevolent comuter with a seductive voice who locks doors and tries to gas you, but rather a digital accomplice. 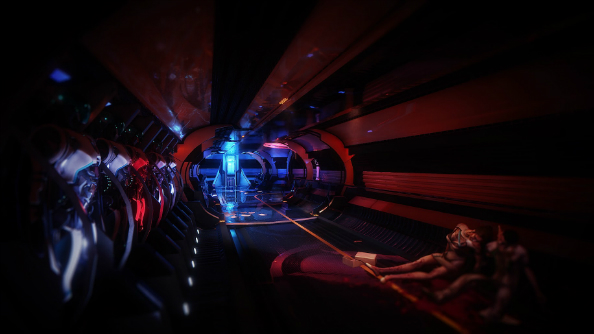 “She’s an AI overseer who was connected to everyone in the city,” says Simonar. “She facilitates everything working in this utopia. Now the city’s fallen. She’s looking to you, the player, as she’s waking up from cryosleep as her lifeline to humanity, because everyone else is a shell of their former selves.

“She’s reaching out to you because you’re the last person who’s still really human here. She’s trying to help you to survive because she’s trying to cling on to what she had before. She’s not a malevolent figure at all, she’s basically working with you, trying to protect you, and you work with her to survive too.”

Simonar and the team are aware of the cliches associated with their setting, and are keen to avoid them: “we didn’t want any AI gone rogue plot.”

Before you delve into its dystopia though, P.A.M.E.L.A. arrests you with its glossy, luxuious looks. In no small part, the game’s striking environmental detail is influenced by its developers’ background in 3D virtualisation. The NVYVE game development studio is an offshoot of a larger company of the same name that produces 3D applications for architecture, automotive and retail usage – among its recent projects is a garage planner app for Home Depot and several architectural virtualisation suites.

The team learned their way around Unity while developing projects like these, and you really do get a sense of their expertise in large-scale environmental design from the vistas of Eden. If P.A.M.E.L.A. were a ‘walking sim’ from the Dear Esther/Gone Home mould, I’d still be bristling with anticipation for it. 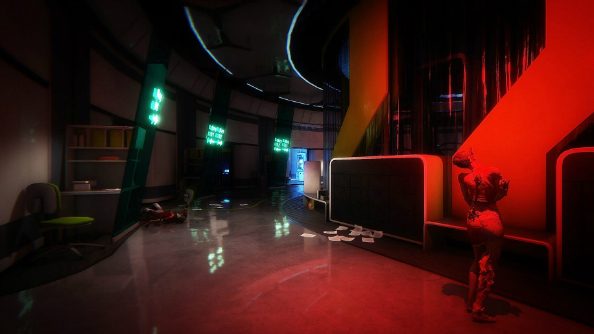 But it isn’t as pedestrian as that. Underpinning hostile encounters with Eden’s lunatic population is a ‘personality-based’ AI system which creates numerous permutations to each combat encounter’s outcome. “[Enemies have] a ton of different emotions,” says Simonar. “All these different feelings that combine to determine what the outcome will be… If you’ve got a weapon, if they’re going to run, if they’re gonna just charge, or get their buddies to charge with them. It’s a pretty big system that will be used by every AI in the game, whether it’s a human or a robot enemy.”

It’s entirely possible, then, that you’ll turn a corner on an enemy who’ll take a look at the type of weapon you have – and just bail. Videogame enemy code of honour be damned. It gives PAMELA’s combat a unique aspect in that it can turn on a dime and result in something approaching friendship.

“One thing we definitely want to avoid is the shoot on sight mentality,” Simonar continues. You can intimidate them. Sometimes they’ll see you, recognise you and they’ll leave you alone unless you get too close to them and start antagonising them. The different factions are all going to behave a little differently.

“Some will be more outright hostile, but the Afflicted, who are the human enemies you see throughout the trailer, they have a wide range of things they can do, to potentially helping you. I don’t want to say you can build a team or anything, but there’s a range from fighting to fleeing to coexisting.”

The game Simonar’s describing would sound ambitious if Ubisoft Montreal were pitching it, let alone a first-time developer with a single-figure roster. However, P.A.M.E.L.A.’s themes and ideas are rich enough that it might well even be a fulfilling experience even if it’s a bit broken. If it isn’t, however, it has the potential to put the Mississauga, Ontario studio on the map.