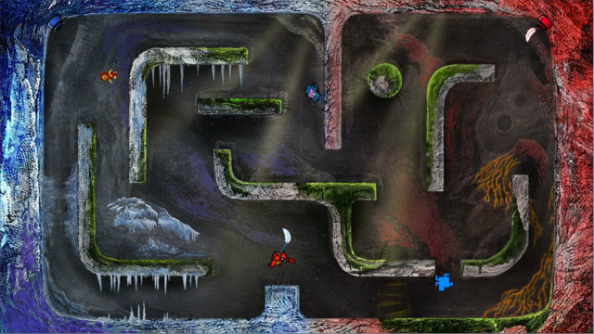 Since March, Paperbound has been a gravity-flipping local multiplayer game in the Towerfall tradition – meaning that it sat tantalisingly in your library until you’d managed to gather together the requisite number of friends and Xbox controllers, before becoming a marvellously murderous party game.

It’s still that, but has now picked up a campaign mode for one or two players. The perfect time to be given it for free, don’t you think?

Paperbound’s October update introduced mutators that twist the formula with weapon pickups, infinite ink bombs and the ominous-sounding vampire mode. New Gatekeeper and Stalwart variants play on tower defence, and the AI has been given an IQ boost.

There’s new mouse input support, too – but undoubtedly the best way to play is still with a controller and a room full of cross-legged killers.

If that sounds like your sort of thing, please interface with the widget below. Visit the homepage, follow us on Twitter – the more you do, the better your chances of finding a Steam key in your inbox (we promise we won’t project your email address into the sky like the bat-signal – it’ll only be used for this giveaway). And be sure to Like us onFacebookto be kept abreast of all future giveaways.