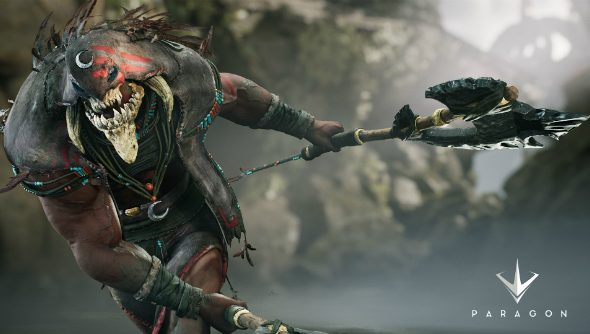 Epic Games unveiled the next hero to join the Paragon roster today, as beefy axe-wielding Khaimera jumps headfirst into the fray on June 21.

Want to know more about balance changes going into Paragon’s free open beta? We’ve got all the details.

Having had the chance to play with Khaimera at a preview event in Berlin last week, we have some thoughts on the new boy on the block – backed up by the game’s director Steve Superville.

Firstly, despite his name’s Greek roots, there aren’t really two sides to Khaimera. He is, through and through, a big front-line brawler who wants to get in your face.

However, there is a little finesse in managing your agression as he’s not strictly a tank so he can’t soak up initial damage and he doesn’t immediately burst down characters so he can’t go in for a hit and run. Instead, Khaimera is meant to hang around being Paragon’s least welcome party guest.

“Khaimera is a hero whose job it is to dominate long-term fights,” Steve tells PCGamesN in our post-battle breather. “The longer a fight goes on, the stronger he gets, which is generally not how a hero works. Generally the longer a fight goes on, the more mana they consume, they lose resources and they get their health whittled down. But Khaimera, he starts a fight strong and then 15 or 20 seconds in he is even stronger than he started.”

The one simple trick Khaimera has that makes other characters hate him is a passive ability which grants HP regen stacks per bassic attack hit you land.

This means the longer you can pummel someone, a minion or a player, the greater your sustain becomes and you can even end up healing through any damage done if the enemy’s DPS isn’t high enough.

“So he’s a melee combatant who has the ability to dive the back lines and get in the face of enemy damage dealers,” Steve says. “But he can also take on tanks because they don’t tend to do a lot of damage but he can farm up his passive HP regen by landing a number of hits on them and then use his pounce to get on characters futher away.”

That pounce is one of his three active abilities. It targets a hero character when in range and leaps onto them, rooting them to the floor and giving you enough time to get some good damage in. Combined with his other basic active ability which boosts your attack damage for three consecutive hits, you can do some decent burst damage before they are free to move again.

Finally, his ultimate ability deals serious physical damage to a single target while pushing other characters out of the way around him. 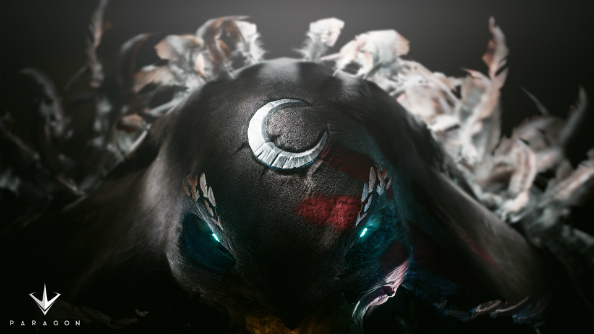 He is basically a big scary monster that bullies his way around teamfights, which can be quite intimidating to deal with unless you take advantage of his weaknesses.

“The counterplay to him is to stall him out,” Steve advises. “Break away from a fight for just a few seconds and wait for his health regen stacks to expire.”

The stacks, while allowing for beyond superhuman sustain if you continue to have targets around you to whale on, disappear very quickly, setting you back to 0 within just a few seconds of the last punch.

For this reason I was easily able to keep super minions at bay on my own, even with their increased hero damage, just by keeping one alive until the next wave arrived for me to punch. At one point I had 300HP per second.

But the second I leapt into a fight and got kited around, I was weaker than a puppy with corked teeth. The passive, then, is a gameplay-defining part of Khaimera’s toolkit and prompts player choice and strategy.

However other passives in the game are being removed or adjoined to actives, as Superville felt they were not creating the same strategic decisions for players.

“Passives that are basic and players don’t make decisions off of, like Gideon’s power increase, don’t add a whole lot to their kit,” Steve says. “We’re trying to keep the ones that are most interesting and impact gameplay by moving them to another ability, and then just strip out the ones that players never recognised.”