What are the best Path of Exile (PoE) builds? The possibilities are endless thanks to Grinding Gear Games’ passive skill tree, which boasts around 1,325 selectable buffs. The variety doesn’t stop there, either. Once you start the game, you’re presented with seven classes, and after that there’s the option to specialise into 19 unique classes overall – each with their own unique skill tree. Oh, and there are weapons and armour with stats of their own, and don’t get us started on the support gems.

Don’t be too put off, though – when you get to grips with all of this you’ll find that Path of Exile is a sprawling canvas for you to test out some outrageous PoE builds. Start with a duelist, build your buffs around your spin attack, and you’ll turn yourself into a mob clearing typhoon. If that’s not your thing, you can build up from one of the shadow classes to create a deadly assassin that’ll pop squishy foes into a pile of gooey loot.

So, to get you started on your quest to create Wraeclast’s deadliest abomination, we’ve picked out three of our personal favourite PoE builds. We’ll go over what classes you need to build from, what stats you’ll want to invest in, and what gear you should be looking out for. Word to the wise, we’ve only provided builds in their base form so they’re a bit friendlier to newcomers, plus you can experiment yourself. We have, however, linked to similar Path of Exile builds that are more detailed if you want a reference point. Enough from us, here are some of the best PoE builds.

The best PoE builds are: 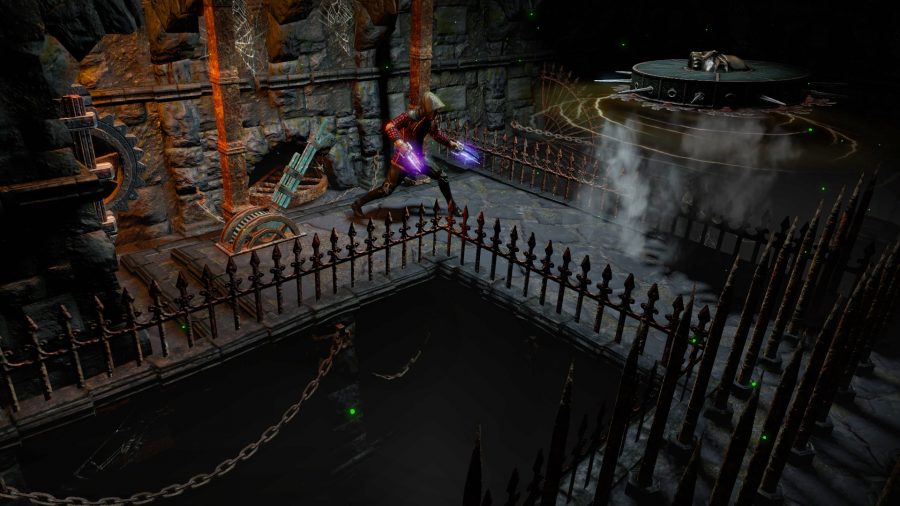 We love a good assassin build as there’s nothing quite like sneaking up on an unsuspecting victim and sliding a blade across their jugular. Where this Path of Exile build truly shines, though, is in its enemy wave clearing capabilities. Thanks to the Frost Blades, you’ll strike an enemy and then fire a volley of projectiles behind the struck foe. There’s a lot to it, so you can check out Reload’s thread for an in-depth breakdown, but here are the basics.

You’ll want to start out as a shadow for this one, and then go the way of the assassin when you gain access to an ascendancy, which happens after beating the Labyrinth for the first time. Once you have become one with the assassin, pick up the Ambush & Assassinate, Opportunistic, Unstable Infusion, and Deadly Infusion perks on the upgrade tree.

To the great surprise of no one, the centerpiece of this build is the Frost Blades weapon. Luckily, getting these icy daggers is a cakewalk – just talk to Nessa after completing the Enemy at the Gate quest in Act 1. You won’t be able to pick the item up as a witch, marauder, or a templar – but if you’ve picked the shadow class you’ll be fine.

Regarding support gems, look to pick up the Ancestral Call so your attacks damage two nearby enemies at the same time. After that go for an Added Cold support gem to add more cold damage to your attacks. Finally, pick up a Hypothermia gem and you’ll do more damage with hits against chilled enemies, more cold damage over time, and have the chance to freeze enemies that are already chilled.

If you’re fighting a boss, consider swapping out Hypothermia for a Ruthless gem and every third attack you do will deal a lot more damage.

Apart from the Frost Blades, there are not any items you strongly need for this build – you mainly want to focus on the stats that come with them. First and foremost, try and get at least 300 accuracy on one piece of gear. We’d recommend an amulet or a ring. 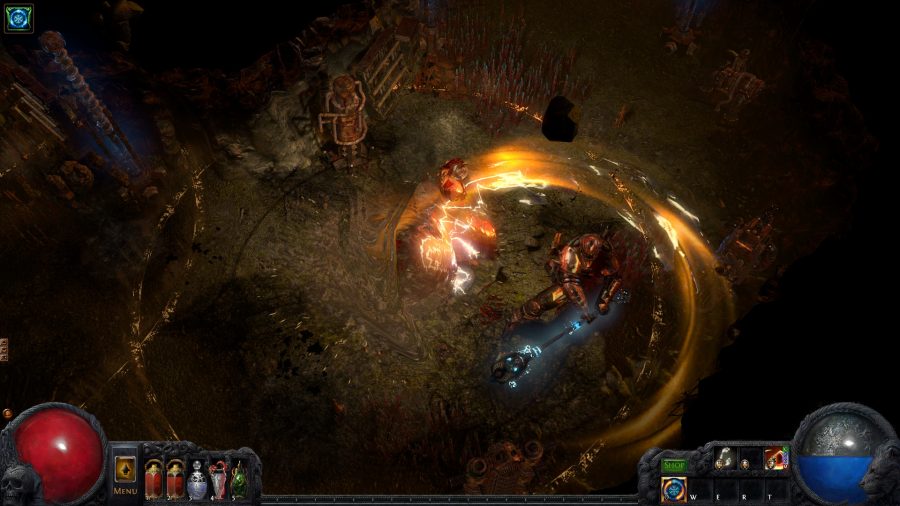 Spinning is a whole lot of fun – why else would Pete Burns and Kylie make hit songs about it? – especially when doing so chops foes to bits in your wake. If that’s your kind of thing, you’ll be glad to know that this PoE build will have you twirling around like an armoured and ravenous Crash Bandicoot. The key to the build is the Cyclone ability, and we’ll scaling physical damage, life, and layers of damage mitigation where we can. That way, we’ll do plenty of damage while being able to facetank a good bit of hurt ourselves.

This is another complicated one we’re trying to break down. If you would like to see a more detailed breakdown, do check out Ahfack’s thread.

The Cyclone ability can be bought from Clarissa following the Sever the Right Hand quest in Act 3. However, it’s only available to rangers, duelists, marauders, templars, and scions. Really, you could use any of those classes for this build, but we would recommend shooting for the duelist.

Once you’ve got your duelist up and running, pick the slayer ascendancy once you’ve completed the Labyrinth for the first time. Once you have access to its skill tree, make sure you unlock the Endless Hunger, Brutal Fervour, Headsman, and Bane of Legends nodes.

Your weapon will be the primary component for this build, as will the gems you put into it. If we’re talking endgame, then you’ll want to shoot for the Atziri’s Disfavour, which is a Vaal Axe you can obtain from beating the queen herself in The Alluring Abyss mission. If you’re looking for a more budget weapon you can get your hands on sooner, the Limbsplit is a solid option that’s obtainable at level 12. Just upgrade a unique axe with five battle born items.

The main gem you need here is the Cyclone ability, which we’ve outlined how to get above. Apart from that, we recommend the following support gems to round the weapon off:

Much like before, no piece of armour will make or break this Path of Exile build, and it’s mainly stats you’ll be interested in. That said, there are some choice items we think really make this build sing. 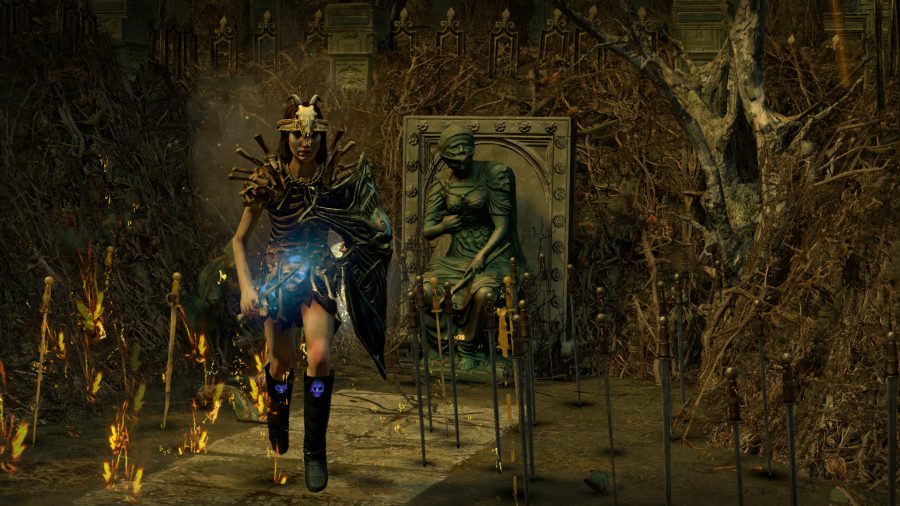 This is another watered down version of a popular PoE build to help you get to grips with it. But, if you’d like to see a more detailed take that’s also based on the Elementalist, you can check out Enki’s, too.

This build is centred on the elementalist ascendancy so you’re pretty locked in, class-wise. To get there, you’ll want to start with the witch class and then choose the elementalist skill set when you complete the Labyrinth quest. Once you have access to it work on getting the Shaper of Desolation, Beacon of Ruin, Paragon of Calamity, and Liege of the Primordial nodes.

The main component of this build is the arc spell, and you’ll more or less get it at the start of the game. Once you complete the Siren’s Cadence mission in Act 1 you’ll obtain it as a quest reward if you’re a Witch. If not, you can purchase it as a shadow or a templar from Nessa afterwords.

Here are some other key gems to look out for:

You’ll want to keep your eyes peeled for anything that bumps up your critical damage, mana, damage, or cast speed as a rule of thumb. Much like before, though, here are some bits of gear we like, and what stats we opt for.

And there you have it, some of the best PoE builds to get you started on the long and slippery slope that is your impending Path of Exile addiction.

These builds are by no means as detailed as some you’ll find online – rather, they’re meant to give you the basics so you can toy and experiment yourself. To that end, we wish you good luck in wrapping your head around all of this.