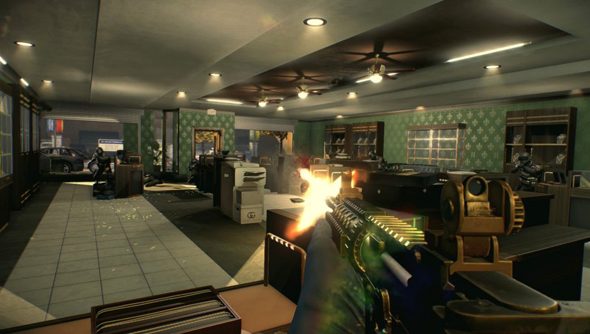 Overkill are bringing the jewel-swiping, cop-shooting antics of Payday 2 to VR, letting players physically scoop up their ill-gotten gains. They can even do so alongside vanilla PC players.

The teaser trailer above shows VR players grabbing at riches, reviving teammates, and doing their best Neo impression as they dual-wield, unleashing a volley of hot lead towards waves of cops.

It looks like you’ll be at a slight advantage in VR too, since you can peek around corners for precision headshots. Presumably it will make stealth a little easier.

Saying that, it’s not clear how movement is going to work. After all, most VR games that handle first-person shooting allow players to teleport. With this being cross-play, I can’t see that working here. It’ll be interesting to see how it handles player movement closer to launch.

Hopefully it won’t be too long until we find out, as there’s a beta for Payday 2 in VR coming sometime this year. It’ll be a free upgrade for existing owners.