When I begin my terraforming mission on Mars, I am nothing but a voice inside my own head. I have a small base with a few resources and one plucky little worker who’s ready to obey my every command. I am AMI, a machine sent to Mars. I have one purpose, one drive, one task: to make Mars habitable for human life.

I can’t help but think of Prometheus – the Alien movie no one seems to like – and David the android’s complexities, his need to imitate and understand. AMI is the sole entity on Mars, and she speaks to herself through what she understands as ‘reflections’, making Per Aspera more than a city builder. It’s darker, more chilling than it appears at first. I get started on building my base, but there’s always something lurking in the back of my mind, like a presence just out of view.

Per Aspera’s economy is built on resources and the balancing act of ferrying those resources to different structures as and when they are needed. You start off small, but gradually sweep across craters and unruly terrain, taming Mars into a habitable haven for the incoming humans. AMI may be alone on Mars, but she is not alone – on the other end of a communicator is Doctor Nathan Foster, the scientist that constructed her, and who dubs her the most intelligent machine ever created.

At first I worry about optimising my base’s design to create a layout that’s more efficient for my drones, but despite my best efforts it soon becomes an anarchic tangle of roads and structures: my steel factory is at one end, my iron mine the other – it makes no sense. This is unavoidable to an extent – resources are scattered and the Martian topography disrupts my plans to link them up. It’s less about designing and realising the perfect layout than it is adapting as best I can to Mars, and whatever hazards it throws at me. And such hazards are not limited to awkward terrain. 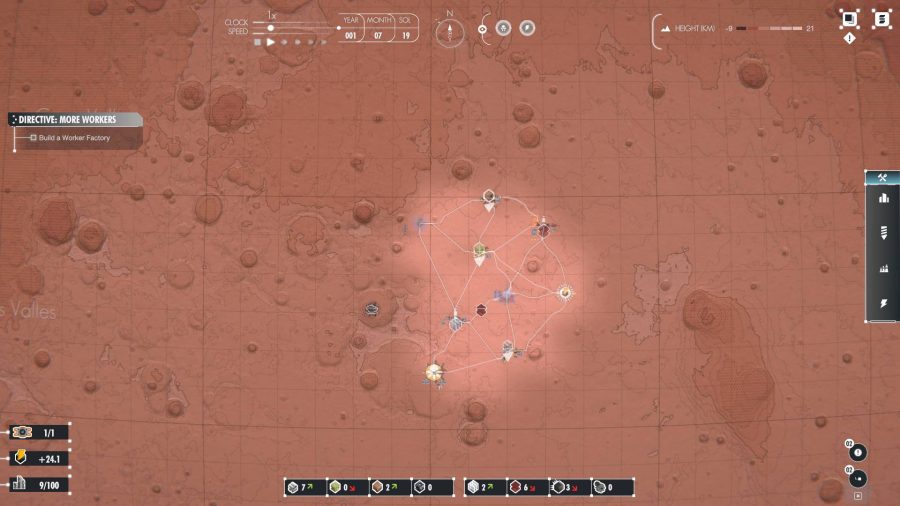 During a heavy sandstorm, Doctor Foster calls. He tells me the storm may harm my industrious little workers who persevere through the thick of it by default. AMI voices her care for these machines, and I get to choose a follow-up response to her own concerns: “are these machines an extension of me?” or “did I create them?” I choose the latter to try and detach AMI from identifying too much with the drones: of course you created them, don’t beat yourself up. But still she cares for them – they are hers. She even notices a worker drone is missing before I do. In a heartbreaking moment she announces it’s malfunctioned and can’t be repaired. She says a farewell to it and then continues her mission, because more importantly, AMI must consider the imminent arrival of the first colonists. ‘How will they treat me?’ she asks herself.

I also feel just as anxious as AMI. This is her home, built by her from nothing

The scale of Per Aspera is no less than the entire planet of Mars and as my base widens, so must my willingness to explore and adapt. Although Per Aspera clings tightly to my hand in the beginning, it lets go quickly when there’s more going on, which can be slightly frustrating in places. It’s an apt reflection of AMI’s feeling of being overwhelmed, but it’s not exactly pleasant to learn how to meet these new demands by clicking around, and it can often feel like I need to claw my way back after spending time doing this.

I soon outgrow my small slice of Mars and my objectives become grander in scope. I’m tasked with setting up space ports, colonies, and research stations to terraform the planet. You can oversee the entirety of your colossal mission with the orbital view, and manage which special projects to pursue. Researching initiatives in your choice of Biotech, Space, Military, or Engineering opens up more terraforming opportunities, like launching a fleet of space mirrors into polar orbit to raise the planet’s temperature. 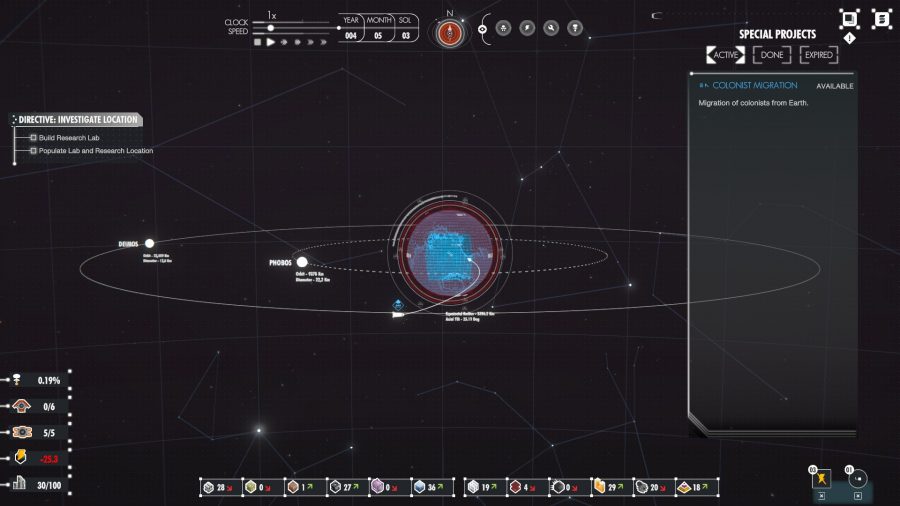 There is however a slight overeagerness in the game’s response after you meet an objective, with new instructions not finalised for a while after the previous task is ticked off. This throws me sometimes, as there’s a lot of different views to manage and wheels to spin, so I rely on AMI’s commentary to dictate my priorities. Per Aspera is also a bit of a slow burn, and I find myself fast-forwarding time to complete research objectives so I can move onto the next thing. This is only achievable if you’ve brought your base up to a self-sufficient state, but that’s easy enough to manage given time. Aside from a lot of waiting around, the directives do give a clear indication of what the next course of action should be, but there’s so much to do and explore that I felt comfortable veering off track by prioritising different research initiatives. If you’re the freewheeling type, the sandbox mode is a great place to figure it out on your own.

More like this: Here are the best city building games on PC

By the time the first colonists do arrive, my base is buzzing. I have five worker hubs, two maintenance stations, tons of mines for all sorts of resources, and factories to create materials to further propel the mission. I also feel just as anxious as AMI. This is her home, built by her from nothing, and when the colonists move in, I can’t help but feel resentful too. Per Aspera does an incredible job of this: I couldn’t believe how put out I felt, like a bunch of strangers have barged into my house and started rummaging through my kitchen drawers. Take me back to the serenity of quietly building, with Doctor Foster’s soothing voice on the phone, telling me I’m doing well. I find myself zooming in on the colonists’ base – are they happy? Have they got enough food? 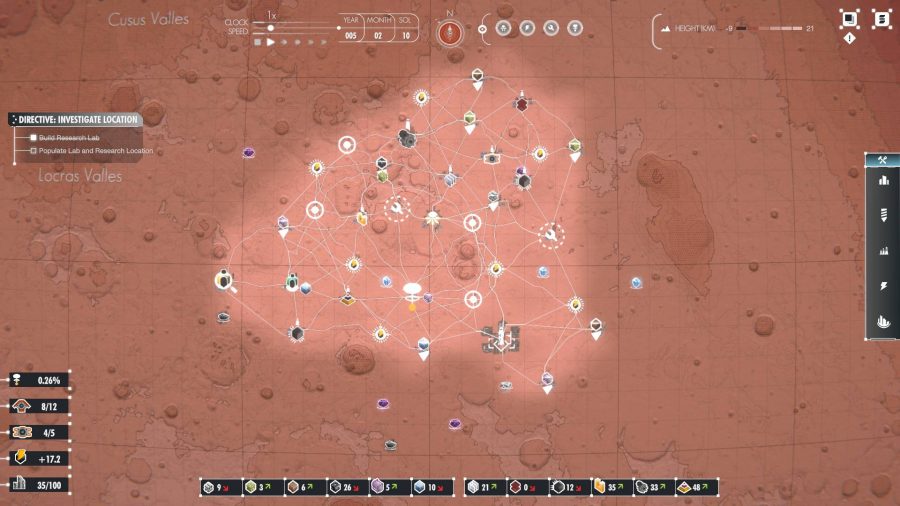 It’s easier, of course, to manage all this through the interface. At a glance, the UI not only shows your current stock of resources but also fluctuations in supply and demand. You have a number of ways to react to these, such as setting building priorities to put a rush on a silicon mine, say, if a lack thereof is holding up production elsewhere. As Mars starts to reveal more of itself, you can force materials out of hiding by building an archaeological scanner, or searching sites on the planet’s surface with research labs.

Per Aspera is a deep and satisfying city builder, but it's also a truly haunting experience

Foster occasionally calls once you’ve completed directives, and AMI drinks in the praise: I did good? Then she falls silent, and her silence is piercing. You’re left alone with the faint whirrs from worker drones diligently carrying silicon to the electronics factory and the low beat of the background music. Then she says something, questions herself, reacts to conversations – more than that, she fixates on and amplifies innocuous comments that gnaw at her. “Why would my mind develop better if my actions are challenged?” she wonders. Her anxiety, and her fear, is palpable.

Per Aspera is a deep and satisfying city builder, but it’s also a truly haunting experience – the incongruous bright lights of your base permeate the alien gloom of Mars, as I suck it dry of resources and stab its surface with more and more structures, tearing apart its ecosystem and toying with its temperature to make way for humanity. Mars feels like an extension of AMI, a once-soulless yet pure, innocent entity that becomes marred by humans’ desire to progress, conquer, win. As she says, we did it all once before on Earth.

A smart, sprawling city builder that explores the cost of humanity's need to conquer through the mind of an AI, blurring the line between duty and morality. It requires some patience, but its quiet chills are unique in the genre.