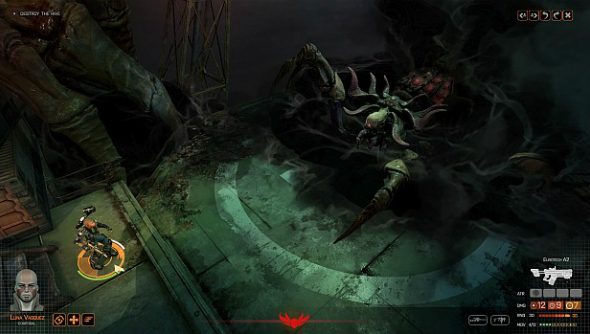 Have a tactical itch that needs scratched? Here are the best strategy games on PC.

In an interview with Gollop conducted by RockPaperShotgun after a play session earlier today, the head of Snapshot Games spoke of how the procedurally-generated baddies can be much bigger than previous X-COMs.

“Procedural generation works on two levels,” Gollop explains. “The first is interchangeable body parts. The other thing is morphing in size and shape to some extent. It might be that an alien has a vestigial element that can get larger. Or it might be a relatively small creature that is based on a large insect or bat, but that might get bigger or nastier.”

RPS’ Adam Smith notes that during one mission on an oil right, an alien capable of destroying the rig and the level itself emerged from deep beneath the waves.

A lot of this ties into HP Lovecraft influences Gollop cited in previous tidbits about the game, which lay themselves bare with a quote at the opening of the presentation RPS played.

The animal-part generation system creates aliens on a whole menagerie of different creatures from all parts of the ecosystem, from squid to penguins.

In addition, these parts hold tactical value such as chitinous shields or shells, which will be appended to the next wave of monsters if you appear to be using specific tactics to wipe them out such as sniper shots.

Phoenix Point is due out in 2018, and will incorporate ideas of human factions also fighting amongst each other from X-COM: Apocalypse.