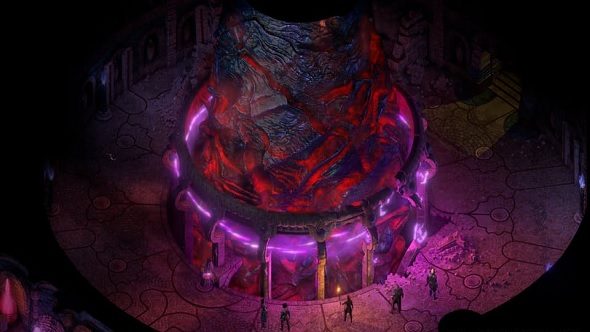 At the time of writing, Obsidian’s RPG has 26,830 backers, which they say is a new record for Fig campaigns. There’s still three days of this left, with the campaign wrapping up on February 24. Considering the thing was funded in 24 hours, those numbers could still climb yet.

Here is our summary of everything we know about Pillars of Eternity II so far.

“It’s truly amazing that we’ve hit this point. We’re now the campaign with the most backers in Fig history, and it’s due to our amazing fans who, like us, want to make Pillars of Eternity II the deepest, most robust, and most engrossing RPG it can possibly be. We’re so excited to be able to include companion relationships, which we know are going to make the game even more incredible.”

Original Story January 29, 2017: Within 24 hours of its fig.co campaign going live, Pillars of Eternity II has already broken through its initial fundraising target, raising over $1,100,000. Based on the overwhelming success of the first Pillars of Eternity, it’s no surprise that Obsidian reached the starting funding target so quickly, proving that ‘90s-style CRPGs still have an active fanbase in 2017.

To celebrate reaching their goal so quickly, design director Josh Sawyer has released a small video (found above) to thank all backers for their support and to tease the stretch goals coming to Pillars of Eternity II.

The first stretch goal will be subclasses, where players will be able to choose up to two specialisations to augment their character. They will work similarly to “kits in 2nd Edition AD&D”, allowing for greater player expression and character development. According to Sawyer, one of the most popular subclasses among the dev team at the moment is the Ghost Heart Lodge subclass, which allows Rangers to summon a ghostly version of their animal companion for use in combat. As this spectral familiar is not technically a beast, this subclass is useful for fighting against druids, but enemy paladins can use Abjuration to “badly damage or even banish” your ghostly friend as soon as you summon it.

Sawyer also released information on how players can import their character from the original Pillars of Eternity for use in the sequel. If you have a special end of game save from PoE, players can import their Watcher for use in PoE: II, with knowledge of all the choices and relationships from the first game carrying over. However, you will start at level one again, so don’t expect to bring your super powered 16th level wizard into this new adventure.

At time of writing, Pillars of Eternity II has surpassed $1.5 million, unlocking the subclasses stretch goal. The next two stretch goals are to increase the level cap to the 18th level and add a Russian localisation at $1.6 million, with a seventh companion and a Polish localisation coming at $1.8 million. With there being over 26 days left in the campaign and the money consistently rolling in, expect Obsidian to achieve these goals very soon.