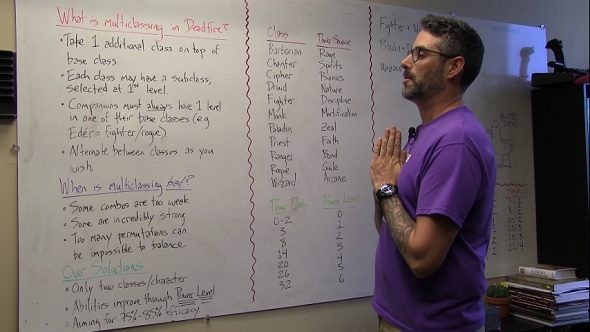 As the fig.co campaign for Pillars of Eternity II: Deadfire barrels passes the $2 million mark, game director Josh Sawyer has released a new backer update to properly explain the multiclass system which will appear in game. Adding subclasses was the first stretch goal added to Pillars of Eternity II and seeing as subclasses and multiclasses can get quite complicated in pen and paper RPGs, the team at Obsidian are trying to strike a balance between deep customisation and an easy to understand system.

For a quick primer, here’s everything we currently know about Pillars of Eternity II.

In Pillars of Eternity II, players can take one additional class on top of their base class at the first level, so you can roll that wizard rogue you’ve always dreamed of playing right from the beginning. Each of these classes may have its own subclass at the first level as well, and you can alternate between levelling your respective classes at will. So, if you feel you’ve put enough time into the rogue life, you can switch back to levelling your wizard class whenever you want.

You are limited to only having one base class and an additional class, there are no triple specialisations in Pillars of Eternity II. Multiclassing can result in a character that isn’t strong in any department, while it can also result in incredibly powerful combinations that players will pick every single time. To avoid these instances of overpowered and underpowered class combinations, class abilities are tied to a Power Source which levels as a specific class does. So, as our example of a wizard rogue, his two Power Sources are Arcane for the wizard side and Guile for the rogue side. For every level in his wizard class, he would gain +3 points to his Arcane Power Source and +1 to all other Power Sources, which is Guile in this case. Until the secondary points are cashed in, they exist in the aether. After your Power Source gets enough points, you ascend to the next Power Level and get access to additional abilities.

Depending on how you decide to level your hybrid character, your progression path may be fairly smooth or horrendously uneven, as some leveling paths will grant irregular access to Power Levels. Obsidian aim to keep the relative power of each multiclass at around 75-85% compared to a single class character. According to Sawyer, that is “the sweet spot where multiclass characters feel powerful and effective, but don’t clearly outshine the single class characters.”

All multiclass combinations are planned to have specific titles so a fighter/wizard is a battlemage, a paladin/druid is a liberator, a wizard/barbarian is a shaman and so on. If you crunch the numbers, there are 55 possible multiclass combinations and Obsidian are working hard to make all the titles sound cool and accurately reflect the skills of that multiclass. Expect potential names to be rolled out via the Pillars of Eternity II fig campaign as development continues.