Captain’s log: the crew are getting sick of hardtack. They think I don’t know, but I can see their morale stat slipping away with every day we’re at sea, dining on flavourless biscuits and water. But I really did need that Ring of Boundless Stars that Una was selling back at Serpent’s Crown, and at his prices I could hardly afford 50 servings of Mariner’s Porridge (+5 morale) on top. I’m sure they understand – I’m a tank. Tanks need that constitution bonus.

I suspect Maia’s keeping something from me. Call me paranoid, but it’s the way she keeps saying, “I haven’t been entirely honest with you…” And the fact she’s a Vailian Trading Company spy, who I recruited as part of a deal with the suits at Neketaka so that they could keep tabs on me. But it just… it just doesn’t quite seem on the level. Ah well – it’ll probably come to nothing. Tomorrow, we arrive at Fort Deadlight, and I exact my revenge on Captain Benweth. Tonight we sleep.

Pillars of Eternity II plays the way you remember Infinity Engine RPGs playing. That is to say, not the obtuse nature you’d discover if you were to revisit them today, but how they sit lovingly in your memories without any of the blemishes. With its blend of merciless AD&D combat, isometric environments, and reams of descriptive text, Pillars II creates a portal back to a bygone age of PC gaming circa 2000ish, when Robbie Williams was the most bankable star in music and people who publicly admitted to playing games were a niche group.

We read the manuals in those days, because if we didn’t we’d never figure out how to play the damn game. Perhaps that’s the most relevant point of reference if we’re going to talk about how much things have changed from Baldur’s Gate to Pillars II. 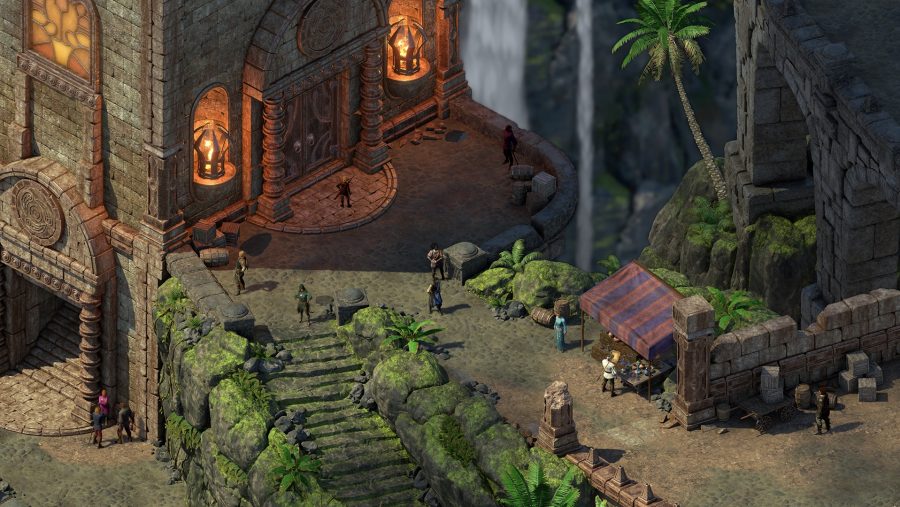 Yes, it feels nostalgic in all the ways you’d want. Yes, it offers a mind-bending learning curve on higher difficulty levels for the 17 people who actually play these RPGs in that way. But Obsidian’s ambitions for this sequel extend far beyond recapturing the time and place in game design they strove for with the first Pillars of Eternity.

One of several directions that ambition takes is in the game’s piratical theme. There’s a surprising amount of Sid Meier’s Pirates! here – from the way you navigate between the islands of the Deadfire Archipelago by ship, to the naval battles that crop up when you sail near hostile vessels, conducted via a text-adventure-style interface. Reprising your role as the Watcher of Caed Nua from the first game, you’re brought back to the realm of mortals by Berath, the god of death and rebirth, because she’s a bit worried about Eothas, the god of renewal and light. He’s just not himself lately; stomping around in physical form and wreaking chaos as he goes. She’d like you to keep an eye on him. It’s not like you have a say in the matter: it’s that, or return to the wheel with all the other lost souls. 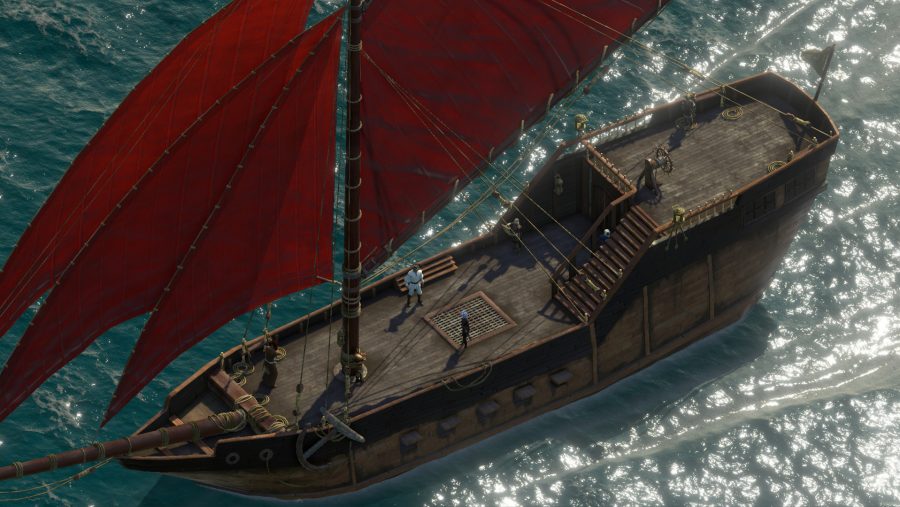 Captain’s log: I killed a lot – a LOT – of Naga today, and I feel pretty bad about it, to be honest. Most of them attacked on sight – I can handle that. They made a good excuse for the gang and I got to try out our new party formation, and a couple of sweet abilities we’ve gained since we last levelled up. Eder’s getting really good at knocking people over and leaving them dazed, incidentally.

But it was the Naga in the lighthouse who plays on my conscience. He conversed with me, and in that moment I understood that he saw Eothas’s path of destruction as a warning from the gods, not to be interfered with. He wasn’t just a meatbag with a HP number. I think I could have got through to him, if I’d just found a Naga soul to bring to him and show him I really am a Watcher. Except there were none around, so…

So Eder got a bit more practise at knocking folk over and dazing them. And I have to live with it. 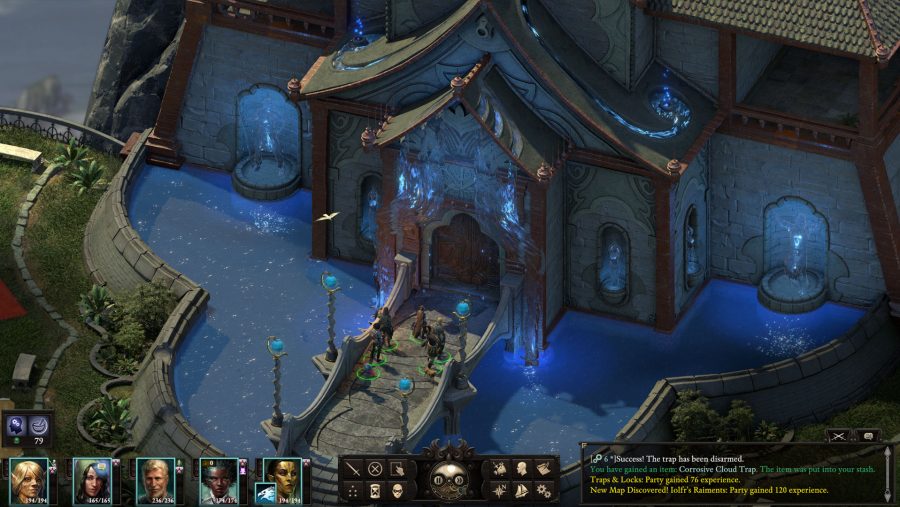 “The Beast of Winter DLC certainly has a mood," Obsidian tells us. "The inevitability of darkness and of endings. All things that decay end. Which is an interesting note to kick off our DLCs on."

Depending on your disposition, combat was either the best asset of Pillars of Eternity or an absolutely baffling mess that killed you just for looking at a level 1 Sporeling the wrong way. Pillars II remains absolutely brutal on anything but the lowest difficulty level, which is presumably a great strength for some, but a few systems have been changed around in the name of clarity. Ditching the separate health and endurance stats is the most significant: now characters have just one number keeping them alive, and when it’s depleted in combat they’re knocked down. If they’re knocked down four times in a row without resting, that’s them dead.

It’s much more forgiving than the first game’s system, but we are talking about the permanent removal of voiced party members and their associated questlines from the game, after all. It’s good to have a little room for manoeuvre there.

Party banter is also governed by a transparent system that tells you when particular companions align or disagree with your decisions and comments, and those of other companions. They might form romantic relationships or grow to hate each other. Along the way, their conversations are impressive for their contextual awareness.

But, look, I could write 50,000 words about the systems and mechanics underpinning everything in Pillars of Eternity II and still not get to the heart of the matter. What makes this worth playing, if you have the slightest fondness for Baldur’s Gate, Icewind Dale, or Planescape: Torment, is the worldbuilding. 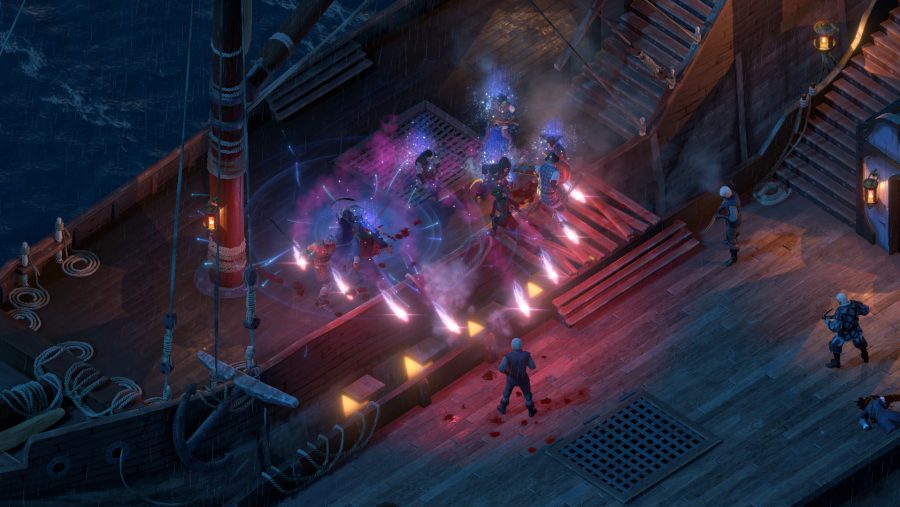 The Principi, Vailian Trading Company, Huana, and Royal Deadfire Company are locked in a kind of cold war over luminous adra. The native Huana are sick of being raided by Principi, so they made a deal with the Vailians giving them license to mine adra on their land. It hasn’t eased their struggle.

For their part, the Vailians are getting deep into dangerous experiments. Their animancers are wielding the adra without any real knowledge of its true power, and their research is attracting the ire of the gods. Not to mention landing you in numerous tight spots. The Royal Deadfire Company want to lure you away from their Vailian rivals, promising limitless coin if you align with them. The Principi are happy as long as the grog’s flowing.

But that’s not really the plot of the game. It’s a political backdrop, one of several that you find yourself getting embroiled in now and then, while you’re trying to pursue your real objective: spying on Eothas for Berath. Backdrop or not, this facet of Pillars II’s story alone is more enjoyable to immerse yourself in than most RPG’s main questlines. 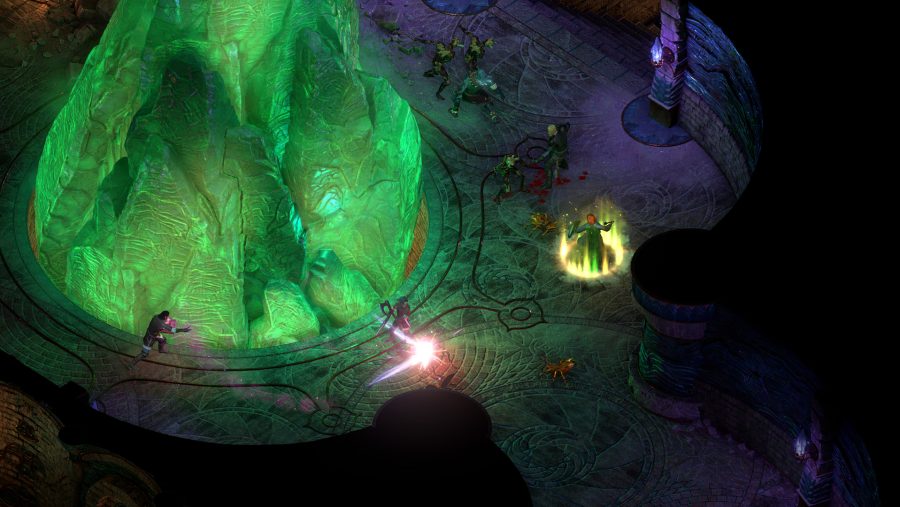 It must come with experience, I suppose, that ability to weave quest and narrative together so closely that the ‘go there, pick up the thing, come back here’ artifice is all but invisible. It hasn’t always been true of Obsidian games, but quests of all shapes and sizes here feel part of the world, full of weighty consequence. I’ve completed bounties on desolate islands not because I needed the coin, but because I felt sorry for poor Abocco back in Neketaka. He was having no luck issuing bounties, and I suspected he was being voiced by Jim Cummings (aka Minsc from Baldur’s Gate) so I threw him a bone. So it goes with nearly every quest – there’s usually a sense of meaning to what you’re doing beyond monetary reward or XP.

The mechanics underpinning everything in Pillars II have shifted marginally towards accessibility, but that still leaves a huge amount of room for brutal challenge levels to its combat – and, crucially, it’s scalable enough that you can whack down the challenge, ignore your party composition, leave the pause key unpressed, and enjoy the adventure. That’s what this is, in a very real sense: an adventure.

Captain’s log: spent the afternoon playing dice with a very nice chap by the dock of Fort Deadlight. He didn’t take too kindly to me winning all that money, though, so after a while I thought it best to depart in case he blew my cover. It took a lot of hassle, and the lives of two good sailors, to get that Principi flag we hoisted up the mast and sail here undetected. All very cloak and dagger. Now I’d best see that Cookie Maina’s special spiced stew makes it up to the tavern, so that my devilish assassination plan might be put to action.

Pillars of Eternity II is an extraordinary game. One that you’ll feel faintly lost in at first as its many systems permeate your grey matter. But, all the while, its story unfolds and reveals new wrinkles, the sense of place growing deeper.