“Hi, I’m Ser Guybrush Threepwood, +6 mighty pirate!” is not quite the way your character introduces themselves in Pillars of Eternity II: Deadfire, but if that was an option it would certainly be in character.

The sequel to Obsidian’s homage to Baldur’s Gate is leaping as far away from traditional fantasy as it can, washing players ashore in the colonial Deadfire Archipelago region. These volcanic islands are populated by diverse indigenous groups and invading corporations, while the seas are dominated by ruthless pirates and explorers. If you are to survive Deadfire, you will need to become the captain of your very own ship.

Ships and seafaring are, on both a mechanical and lore level, what sets Deadfire and the original Pillars of Eternity apart. The ocean and islands provide a true shift in atmosphere for the series, and provide a whole host of new problems to be solved. Problems like:

Welcome aboard The Defiant 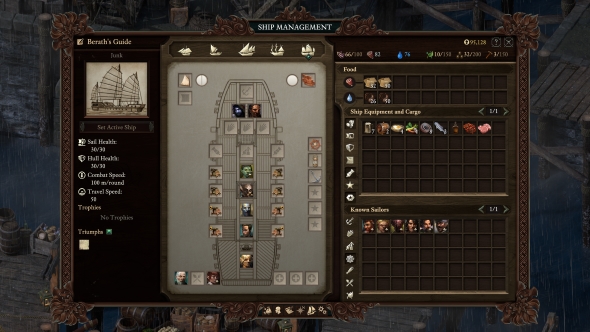 Pillars of Eternity featured Caed Nua, a walled keep that functioned as both an HQ for your party of adventurers, as well as an underbaked distraction from the main quest. With Pillars of Eternity II, Obsidian make a more concerted effort to ensure stronghold management is a fun and integral part of the game, which is why your HQ in Deadfire floats and can shoot cannon balls.

Over the course of the game you can invest in bigger and better ships, but you start with The Defiant – a modest boat with room for a small crew and four cannons. It is a blank slate; just mere timbers ready for you to place your own personal stamp on it.

“We know that people really like the ability to customise these features, whether it’s a stronghold or a ship, so we give the player a number of different options in terms of what ships they can actually use,” Josh Sawyer, design director on Pillars of Eternity II, explains. “You have the ability to rename The Defiant. You can find a number of other ships, from galleons to voyagers. They each have their own look and properties and you can upgrade their cannons and sails and other little bits and bobs.”

These customisation options are not merely cosmetic. Well, aside from what colour you paint your deck, that is. Each sail choice and hull material option adjusts the stats of your ship, allowing you to reach higher speeds, endure harsher strikes, or a sprawling variety of more complex trade-offs. Cannons, like the weapons wielded by your adventurers, come in numerous forms: from chain-shot that can decimate enemy sails, to the all-purpose cannon ball that is effective at range and all but useless up close. 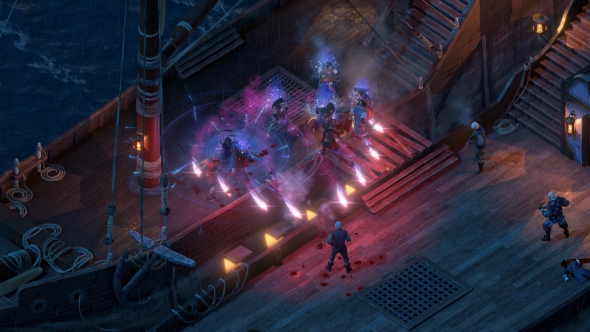 A ship is only as good as the folk who crew it, though, and you will not be short on choices for your new posse of sailors. “There are lots of different NPCs that you can find around the world that you can hire on as crew members,” Sawyer says. “They each have their own personalities and skill sets as far as working on the ship goes, and it really opens up a huge amount of customisation for the player.”

There are multiple roles that willing crewmates can fulfil on your ship. To work efficiently, you need deckhands for general maintenance and a boatswain to manage them. Cannoneers are required to man the artillery while a helmsman must take the wheel. Below decks you will need a surgeon to patch up the wounded and a cook to keep everyone fed. As you can imagine, being captain to all these people is no straightforward task.

Recruited NPCs have skill ratings that dictate what careers on the ship they are best suited to, but it is their plethora of personality traits that make your sailors interesting. You may recruit a cannoneer who is strictly religious, or a talented surgeon let down by their exceptional greed. These traits help define your crew beyond their job title, and Obsidian hope that you will think of them with fondness rather than seeing them as meat for the grinder.

Life at sea is tough. You will need to care for your crew in order to keep their heads above water, both metaphorically and physically. You need to pay them wages for their service, keep them well fed, and make sure they are all in high spirits. A ship with no cook, no fresh food supplies, and empty coffers will result in arguments, turmoil, and – eventually – revolt.

A mutiny is just one of numerous ship events that can occur while sailing the seas of the Deadfire Archipelago, and many of these choice-driven activities draw roots from your crew’s personalities. A ship with spiritual sailors may require you to work around their various practices, such as holding rituals to keep evil spirits away. That ritual may involve throwing gold overboard in order to appease a water god, but greedy sailors might approach and ask you to palm a few coins their way before hurling the chest into the depths. Decisions, decisions.

Wages, disagreements, hunger, and even romantic entanglements will cause you a variety of headaches during your travels too, proving it is not just choppy waves that pose a threat to your smooth sailing. But it is events like these that make Pillars of Eternity 2’s ships more than just floating statistics, and they demonstrate that Obsidian are seeking to deliver on the ideas that the original game occasionally failed to meet. 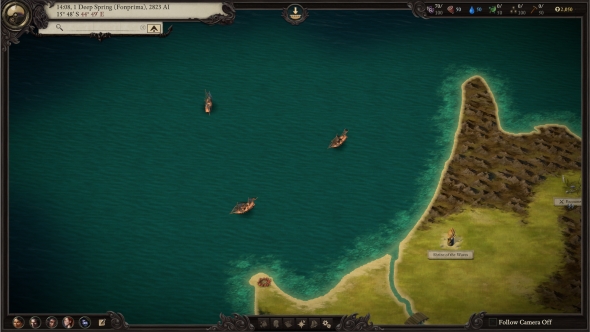 Deadfire’s ships provide a trio of gameplay mechanics. Beyond being a HQ for your party and crew, your vessel is the method through which you explore the Archipelago. “We want exploration to be a big focus, and with that comes a lot of risk,” Sawyer says. “You can find enemy ships that are very hostile and very powerful. You can find monsters that will encounter and attack you, and you can also find unexplored islands that offer some of the potentially most interesting things.”

Where the first game featured a Baldur’s-Gate-style world map explored via quick travel between major settlements, Pillars of Eternity 2’s overworld map is fully explorable. While not deeply detailed like the location maps, the overworld can be freely navigated, with a marker representing your party moving across the land. It is in these exploration segments that you will encounter new locations and Pillars’ pen-and-paper-style events. Much of Deadfire’s world is ocean, however, which is where ships come into play.

Exploring via boat is as simple as walking, but every sea in the Archipelago is sailed by a variety of enemy ships. The majority of these are unique vessels designed by Obsidian themselves, and crewed by gangs you will come to know and perhaps even fear.

Batten down the hatches 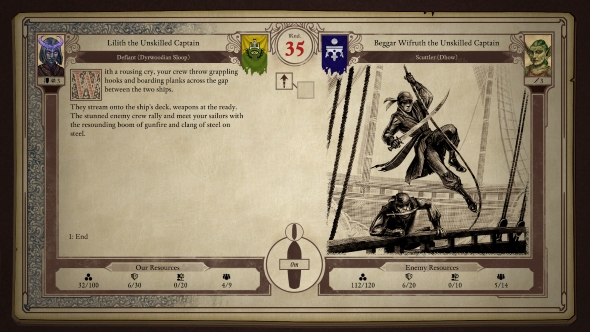 Your relationship with these seafaring gangs will be partially forged in the fires of naval combat. “We thought about a number of different ways to approach ship combat,” Sawyer reveals. “The one we settled on is based on our desire for it to be a deep system where you have a big connection to your crew. That demanded that we go with something turn-based.”

Ship combat takes place on a screen that draws heavily on Pillars of Eternity’s roots in Dungeons & Dragons, with illustrative art and a series of descriptions that detail the actions of each ship. Each round of battle allows both sides a few actions each, mostly based around the physical movement of your vessel. “We wanted the player to be able to take their time and plan their individual moves,” Sawyer says. “We wanted them to feel, most importantly, like a ship captain where they were giving orders to their crew, and then to really care about their individual crew members over the course of a fight.”

Turn by turn, you command your ship to chase down the enemy, get them within range of your cannons, open fire, and obliterate their sails in order to leave them floating helplessly. You then close in for your crew to board, which transfers you to a new isometric scene where the traditional party-based pause combat allows you to make the fight close and personal.

That is if everything goes smoothly, of course. Chances are it won’t. Enemy AI is tricky, and ensuring they do not outmanoeuvre your cannons is a challenge. There is also the fact that they will be firing their own ordnance, which not only shreds your decks apart, but your crew too. As battles become heated, you are required to call the shots on what your crew do. Injured staff must be sent below decks to be operated on by the surgeon, with deckhands replacing those who have been taken out of action. A leaking hold must be drained and repaired. If you know the manic struggles of keeping a spaceship flying in FTL, then you should be prepared for the problems that being a captain in the Deadfire can present.

The original Pillars of Eternity was exactly what Kickstarter backers in 2012 were expecting: Baldur’s Gate, but new. Since Obsidian planted the seeds of the classic RPG renaissance, however, expectations have skyrocketed. Pillars of Eternity II needs to offer something much more than high-definition nostalgia in order to succeed in 2018, and it looks like that could well be found in its dedication to seafaring and tactical battles. By expanding into new and strange directions, Obsidian are not only honouring the expectations of players, but the lineage of Baldur’s Gate and its inspired, bold sequel too.