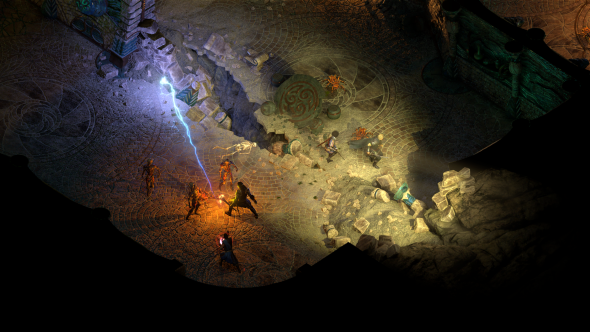 Pillars of Eternity II has the makings of a swashbuckling adventure, concerning as it does the chase of a reborn sun god across volcanic islands and pirate-strewn seas. But more intriguing than the plot itself are the companions caught up in the hunt. After all, they’re the ones we’ll be spending the most time with – fighting, chatting and falling in love, or at least cementing platonic friendships based on mutual respect and good spellsmanship.

Read more: here’s everything we know about Pillars of Eternity 2.

For that reason, we’ve collated all the information so far available on new and returning companions – those you haven’t left for dead in Pillars 1, anyway. We’ve also had a chat with design director Josh Sawyer about what we can expect from companion relationships in Deadfire.

Word to the wise: if you haven’t finished Pillars 1 yet, you might be better off skipping straight to the section that doesn’t concern any specific companions.

Who are the returning companions from Pillars of Eternity?

The few familiar faces in the Pillars 2 companion roster have spent the last few years outside your orbit. They’ve been living with the consequences of your influence on them – whether you nudged them in a particular philosophical direction or, er, got them killed. Bit of a full stop in the old ‘personal development’ diary, that one. The first name you’ll recognise belongs to… 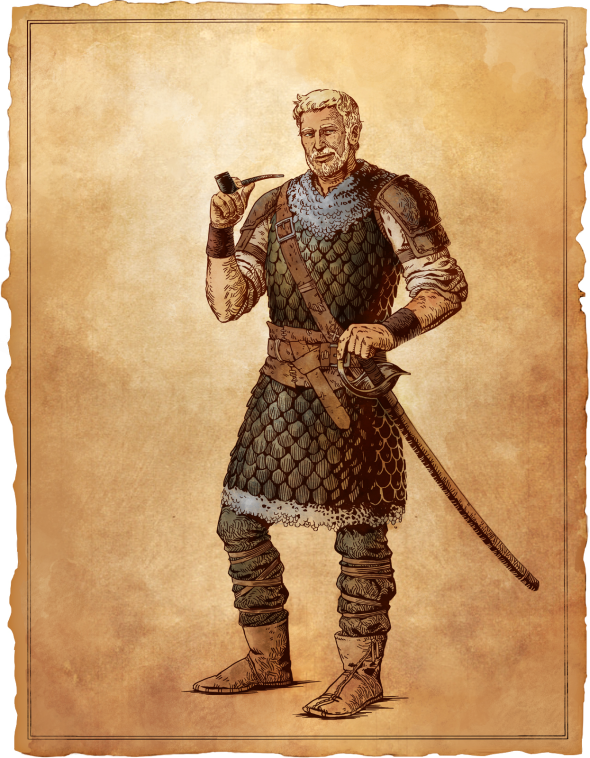 The companions Obsidian have chosen to bring back all have some kind of personal stake in the divine events of Deadfire – and nobody has a horse in the race like Edér. In Pillars 1 he was a persecuted worshipper of Eothas, patron deity of the losing side in a recent war.

During the course of the game, he came to question the nature of his faith, and ended up either leading an underground group of Eothasians or reviving the town of Dyrford – effectively choosing between faith and country.

Whichever way it went, however, Edér isn’t done with spiritual matters – not least because Pillars 2 finds his god bursting from the ground beneath your stronghold and zipping off into the tangible world. That’s the sort of sign you can’t ignore.

Unless you’re dead. Which Edér might be, depending on how well you looked after him in the first game. If that’s the case, he’s not going to be grappling with anything, and certainly won’t be joining your party again to swing a sword. To be clear: if your imported save file contains a dead Edér, he won’t appear in Pillars 2 at all. How’s that for consequences? 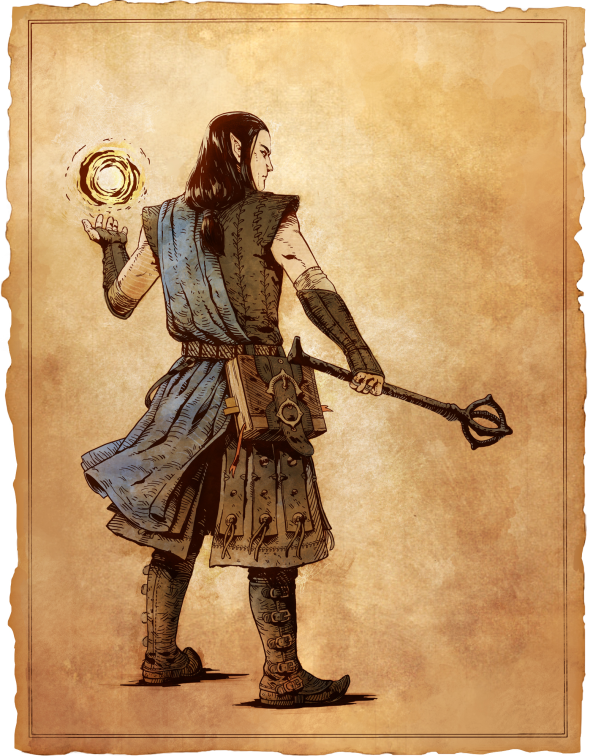 Aloth is the elven wizard best remembered for sharing his body with a personality from a past life. He has a history of opposition to animancy, the science of soul manipulation, and can end Pillars 1 leading an organisation dedicated to stopping the practice – all in the name of keeping the gods’ secrets. He too, then, has a vested interest in the fate of a god who has suddenly become not very secretive at all.

If you pick him up as a companion in Deadfire, you’ll notice he’s changed – dropping the deference and, Obsidian’s hints suggest, embracing his second personality.

All of which becomes moot if, uh, you sacrificed him to the blood pool in Dyrford’s ruins. He’s not coming back from that. 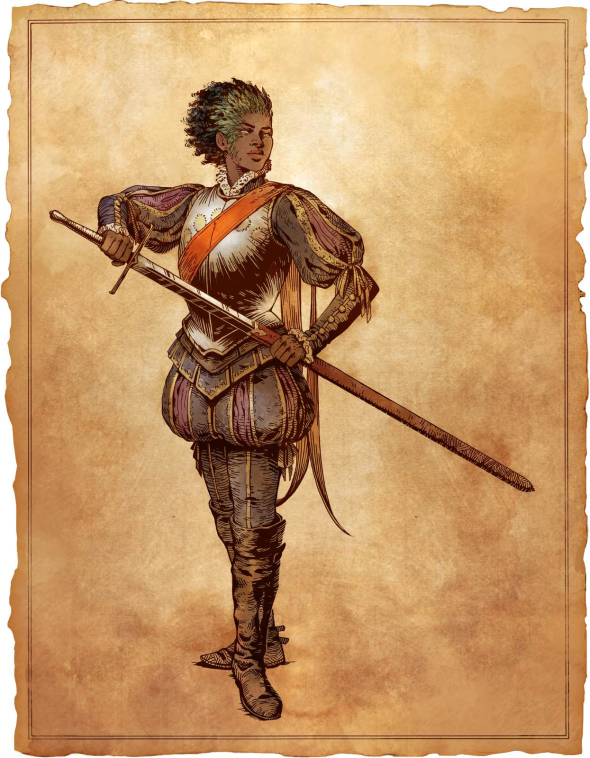 You might recall that Pallegina was the paladin with a name like sparkling water and hair like a bird, who played an ambassadorial role for the Vailian Republics. The Vailians are an active colonial force in the area of the Deadfire, and so she finds herself in the archipelago just as your turn up in Pillars of Eternity 2.

In the last game she was picking between conscience and duty – and depending on which way you pushed her, she’ll either start the sequel as a respected champion or a disgraced soldier who disobeyed orders. Or perhaps as a Kind Wayfarer, helping out the needy at the expense of status.

Unless, of course, you’ve got her killed too. Surely you can’t have got them all killed. There’s tragedy, and then there’s carelessness.

Who are the new companions in Pillars of Eternity 2? 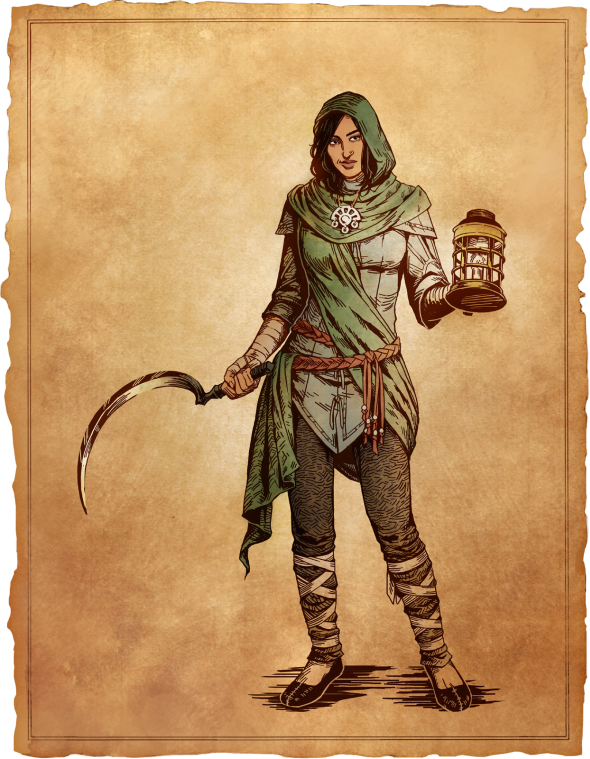 Funded by a Fig campaign stretch goal, Xoti will bring the Pillars 2 companion roster to a total of seven.

She isn’t native to Deadfire, but has been around longer than most – having fled to the archipelago in her childhood to avoid the Saint’s War. Xoti comes from a farming family, and wields a sickle – on account of her devotion to the aspect of Eothas responsible for the harvest. She’s intrigued by Eothas’ new manifestation, but worries it’ll lead to still more war.

Sawyer says to expect clashes with Edér, who has his own, strongly-held views about the god of light and renewal. 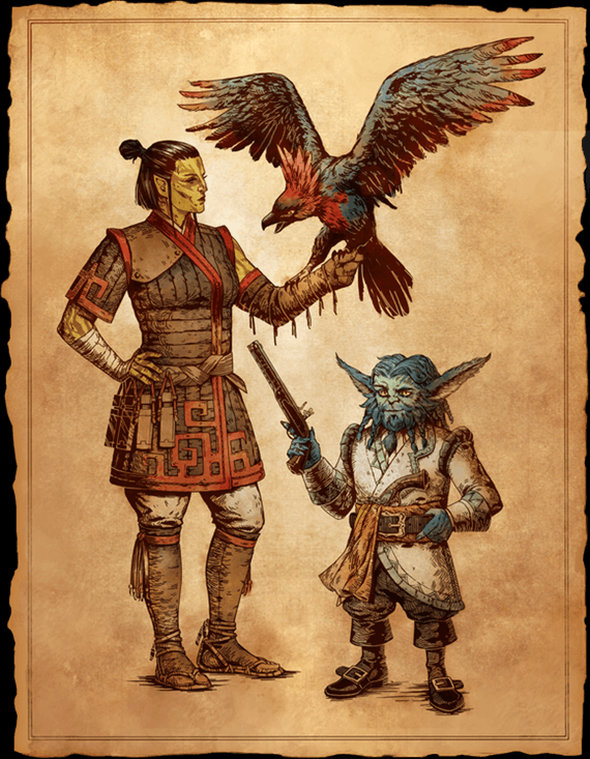 Maia is one of the vaguely aquatic aumaua, but as a ranger she prowls on-land environments with her colourful, eagle-like companion Ishiza. She’s come to Deadfire as a colonist – a ship’s captain for the powerful navy of Rauatai.

Her mission up to now has been an ambassadorial one, accompanying a courtier in an attempt to win over the native Huana people. Maia is fantastically experienced when it comes to fighting and steering ships – not so much when it comes to politics and espionage. When you find her, she’s adapting.

Serafen is a curious mix of barbarian and cipher – one of the psychological warriors of the Pillars universe. More pertinently, he’s a pirate – born into slavery, pressed into service as a rigger and “powder monkey”, before seizing his own destiny on the high seas.

As an orlan, Serafen looks sort of cute and Furby-like. But as a member of the Príncipi sen Patrena, the strongest pirate force around Deadfire, he’s become a feared “ship hunter”. There’s bubbling disunion among the Príncipi, though, and as the game begins Serafen is worried he’ll see his corsair community split apart.

Tekēhu is a male marine godlike who can play either chanter or druid. He is a “watershaping artist” (an artist whose medium is water, we guess?) whose talents have apparently earned him some renown among the Huana tribes. That makes him a native – the Huana are the primary indigenous people of the Deadfire Archipelago.

Tekēhu is a marine godlike and watershaping artist. He is the pride of the Huana tribes, but the weight of prophecy often stifles his ambition.https://t.co/mLSvMtLEEy pic.twitter.com/Tt8ZwSeCnM

What’s different about the companions in Pillars of Eternity 2?

For one thing, the team at Obsidian have started working on companions earlier in the process.

“In Pillars 1, we didn’t really sit down to talk about how the companions integrated into the factions or the critical path until much later,” says Sawyer. “People noted that and said, ‘Some of these companions feel like they’re coming along with you just because you’re the main character.’”

Getting down to task of writing companions at this early stage has allowed the developers to fold them more closely into the central plot. 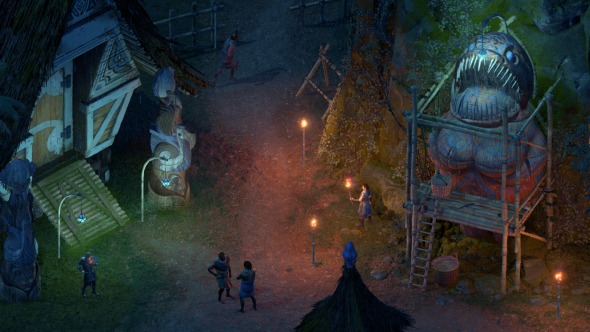 As writers have fleshed out their companions, they’ve looked for places where their relationships with fellow companions, not just the player, might advance or devolve.

“In Pillars 1, those characters had a few banters here and there, but they didn’t really have relationships that developed over time, which I think is more interesting and important,” Sawyer expands.

He provides an example: in Pillars 2, an NPC might say something in support of the god rampaging across the land. And Edér might respond positively to that, saying as much. Xoti, however, is a priestess of Gaun with an unorthodox view of Eothas – and could clash with Edér in that moment.

Obsidian are tracking those relationships over time, and displaying them on the new reputation screen so that players can do the same. You’ll want to pay attention to the sympathy or antipathy your companions feel towards each other, since they can build to confrontations. And those break points can be avoided.

“You can have a character where, if it never really comes up, other companions don’t get irritated because they don’t know this character has these pretty nasty, deep-seated beliefs,” says Sawyer. “But if you draw those out of that character, people around them start reacting.”

In other cases, however, embracing the drama can work in your favour.

“Sometimes the confrontations that seem negative are actually the way to go toward a more positive relationship in the future,” hints Sawyer.

At the moment, the implementation of this dizzying web of feelings is tied to a $3 million stretch goal in the Pillars of Eternity 2 Fig campaign.

“Overall we’re making the companions deeper across the board in Pillars,” says Sawyer. “But to do the crazy reactive relationships, that’s what the stretch goal is for.” 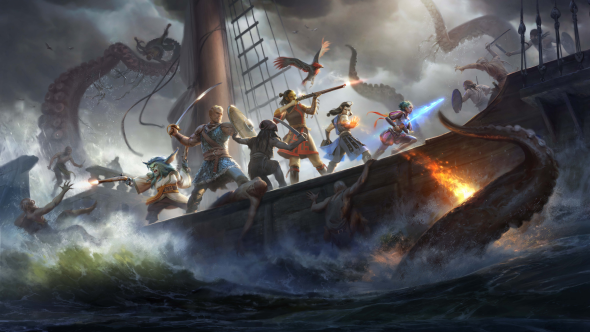 “It seemed like it would be weird if romance were never an option for any of these characters,” muses Sawyer.

But like camaraderie, rivalry or seething hate, it’s one of many ways a companion relationship in Pillars 2 can go. Some characters will have romantic inclinations, while others simply aren’t looking for love. Obsidian have felt no obligation to make a certain number or variety of characters romanceable.

“We didn’t want it to be a checklist,” says Sawyer. “We wanted to say, ‘Let’s write the characters and see how they develop, and when it feels like it’s appropriate for a relationship to develop, let’s do that.’”

That goes for both dalliances with companions, and those between companions.

“We know we have fans that really want romances, and there are some people who really don’t like romances at all,” adds Sawyer. “It’s not something that’s going to be foisted upon you.” 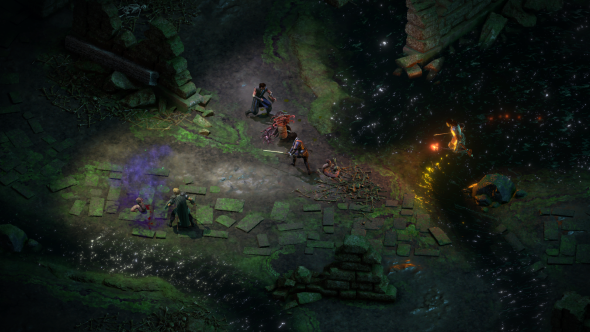 The Pillars team have taken a leaf from Tyranny’s book and given each companion two base classes. Edér, for instance, can be fighter or rogue – and you’ll choose to advance one or the other.

“That way you don’t have redundancies where you want to play a fighter, and right away you get a fighter [companion],” explains Sawyer. “You can say, ‘No, I want you to be a rogue. Complement me, don’t replicate me.’”

Beyond that, the addition of multiclassing in Pillars of Eternity 2 provides near-endless options for customising the class and abilities of companions. Not all sensible options, mind, but options nonetheless.

It’s worth noting that, if you don’t get on with Edér, or you’re that one alarming player who got literally everybody killed last time around, you can also build custom adventurers from scratch. They’re quieter, but they’ll be exactly as you want them.

“If people don’t like the companions, that’s fine,” says Sawyer.