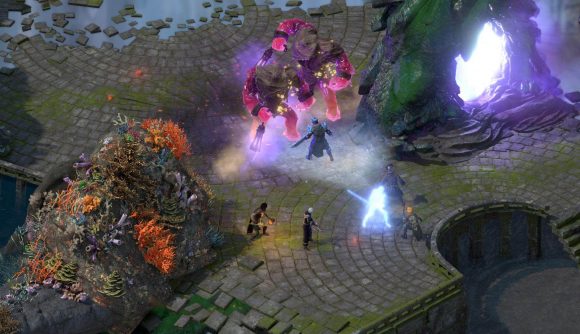 Following Beast of Winter, Pillars of Eternity 2’s next DLC is Seeker, Slayer, Survivor, a completely different type of adventure that places players into a gladiatorial arena fighting for the glory of Galawain, god of the hunt.

The Seeker Survivor Slayer DLC was shown off at Gamescom 2018, and we were able to discuss the ideas behind it with the expansion’s director, Brandon Adler.

“It’s heavily focused on combat, we’re trying to play around with that,” Adler says. But he makes clear that this isn’t just a standard arena mode: “The fights are not just ‘grab a bunch of creatures, throw them in an arena and have a fight’. One of the fights is two wizard brothers that are fighting each other, and they both cast different types of magic. They put giant wards on the ground to protect themselves from their brother’s magic, and so you jump between those wards whenever you’re trying to avoid spells.”

The DLC’s title is drawn from the three forms of fights that you’ll conduct within the arena: seeker, survivor, and slayer matches.

“All the fights have a little puzzle to figure out,” Adler explains. “In seeker type fights you have to find something special about the fight, like a set of spiders with regenerating properties where and you have to figure out which is the queen spider [who you must defeat] so you can take out the others.”

Survivor fights are, as the same suggests, about staying alive through a series of enemy waves. Slayer fights are tough in a different way: “they’re big hard creatures that kill you quickly and you have to kind of smash and grab,” Adler explains.

While arena combat is the focus of this DLC, don’t expect to be confined to the walls of a colosseum. “There’s still a lot to go and do,” Adler says. “There’s lots of other places you’re exploring to go and find artefacts to bring them back.”

These artefacts are sacrificed within the arena in order to summon each suite of fights, and so the exploration elements are just as vital to the experiences as the arena fights themselves.

“The DLC takes place on a pretty big island, so there’s all the random encounters and lots of scripted interactions and storybook scenes scattered around, too,” Adler adds. “It has a full story that you’re exploring just like Beasts of Winter.”

“The island itself has been calling competitors, and it’s made the animals and the natives full of bloodlust,” Adler explains. “And so the Watcher is trying to figure out what is going on and what kind of connection it has to the greater story of Pillars.”