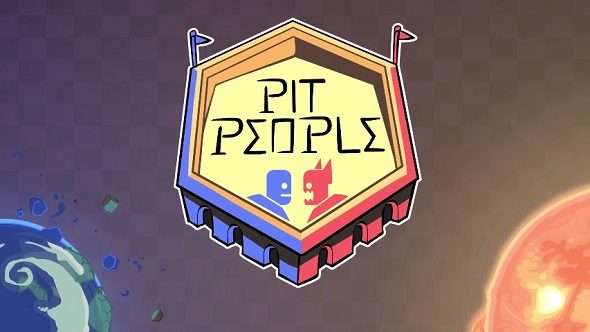 From the minds that brought you such delights as Castle Crashers and BattleBlock Theater, The Behemoth are finally launching their mad cap strategy game, Pit People, on Steam Early Access. Halfway between Final Fantasy Tactics and an acid trip, Pit People has players gathering bands of shirtless men, sentinent cupcakes and ghosts to travel across the apocalyptic wonderland known as the Pit, fighting off various technicolour freaks along the way.

For some serious strategy, have a gander at these great PC strategy games.

Being a turn-based strategy game, Pit People has you moving your characters across a hexagonal map, carefully positioning your troops to attack oncoming enemies and defend against possible flanking manoeuvres. The weapons that you can wield are suitably bizarre, as you can equip people with picket fences for shields while they fight against burly men who swing giant daisies like bastard swords. The Behemoth clearly have not lost their surreal sense of humour, with the crazed narrator from BattleBlock Theater returning to narrate your antics. If you loved the jokes in that game, you’ll get on with Pit People no problem but if you found that constant randomness grating, it’s not letting up here.

Much like BattleBlock Theater and Castle Crashers, you can play the whole of Pit People’s campaign in both local and online co-op with another player. There is competitive multiplayer as well, with offline and online 2v2 arenas for players to test their strategic skill. If you have game saves of either BattleBlock or Castle Crashers on your computer, you can even unlock special characters and weapons from the previous games, including the multicoloured Knights, Hatty Hattington and one of the Theater Guards.