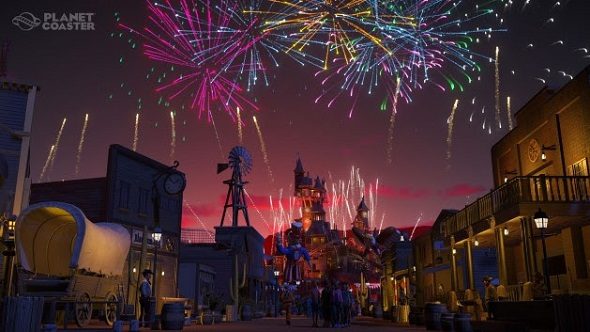 Frontier developments are bringing some sparkle to Planet Coaster with an upcoming Summer Update, adding fireworks and more to the theme park builder. The developers have bestowed these gifts upon us before, with both the Spring and Winter Updates, but this will be the largest one yet.

Build up your empire in our list of the best strategy games.

There are 30 different firework types, and you can create your own shows using the Sequence Editor. We asked the art director for Planet Coaster Sam Denney about it – you can set “triggered audio, animations, particle systems, special effects, lights, and fireworks” all together, in one elaborate show of explosions.

On top of the fireworks, the update also adds the ability to allow players to import images and video to use on screens and panels around your park. Make an advert for a fake business, or just put pictures of your hairy arse all over the shop.

Elsewhere, the update adds new rides: the pendulum-powered Iron Claw; a swinging ship called Blackout; and Sky Watcher, a towering observation platform. There are new rollercoasters too: the Gnarler, a modern train on a wooden track; an inline thrillride on the Viper One; a compact circuit on the Power Up; a looping, modern track on De-Gen; and Bolt, a bending boomerang.

Denney said that the community were a big influence on the new rides in the summer update too – feedback on the rides from the spring update were the inspiration for a couple of boomerang rides in this update.

As with all previous updates, it’s going to be completely free. When talking about whether the team will be doing paid DLC, rather than updates like this, Denney had this to say.

“We’re not charging for any of this at all, it’s all totally free, again we just keep doing that. Paid DLC is being asked of us, it’s still something we’re considering, but there’s nothing as of yet.”

On top of all that, there are new scenarios, fresh bits of scenery, and more. It’s out on June 27.