We’ve all been wondering what game Frontier has been working on next. It’s been no secret that the studio has an unannounced first-party IP on the way, but little was known about what direction the studio was going with it. Would it stick to the management sim or go in a completely bizarre direction and create a Planet Coaster spin-off using one of the game’s many mascots?

Well, we can all stop scratching our heads, as Frontier has finally announced its new game. And no, Chief Beef isn’t getting his own battle royale game. Yes, that is a crime. Instead, we get Planet Zoo, a management sim that lets you build your own animal park.

Keeping in line with Frontier’s park game history, Planet Zoo is a hybrid of the studio’s previous games: Jurassic World Evolution and Planet Coaster. You’re tasked with designing and building a zoo, complete with animal enclosures and park necessities like cafes, souvenir stores, and food stands. Animal welfare is your number one priority and so keeping all the beasties safe and well fed is vital.

Switching from the structured metallic tracks in Planet Coaster to the more organic and natural aspects of animals is a big change for Frontier, one that required the studio to approach the work in an entirely different way. Planet Zoo’s game director Piers Jackson explains how the team prepped for the transition, and it took a lot more work than just watching David Attenborough’s complete Planet Earth collection.

“The guys have done a huge amount of research in all the departments,” Jackson tells me. “Animation, character modeling, design – we’ve all spent a lot of time researching the animals. We have a number of people on the team that have biology backgrounds so there is some experience within the team. But a lot of it comes down to breaking down the individual animal behaviours, and reassembling them in within a needs-based way.”

If you look at the animal and you think it's behaving correctly, we've done our job

Jackson sums up the team’s work in a single sentence, but each of those words carry a heavy weight. Capturing each animal’s behaviour, how they look, and their personality is a ton of work and requires a lot of knowledge and skill. The animation department in Frontier is the biggest area of the studio due to the sheer number of details and attention each animal needs.

Even with the small handful of creatures that Frontier has revealed – hippos, lions, zebras, timber wolves, elephants, peacocks, and grizzly bears – it’s a lot of work and that’s not taking into account all the other wonderful beasties and birdies Frontier is working on behind the scenes. 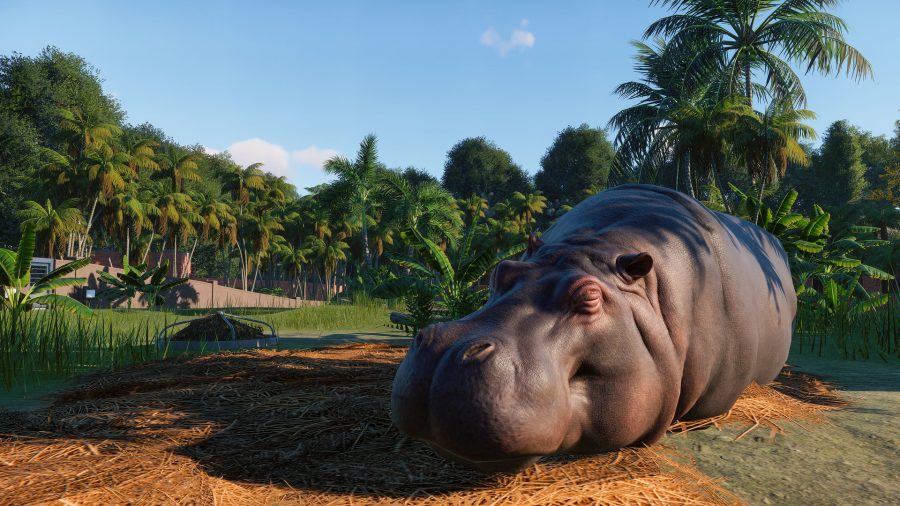 Creating something that looks so natural in both appearance and behaviour from lines of computer code is tougher than it looks, but the devil is in the details. For example, no two animals in Planet Zoo look the same, even within the same species. Each individual has subtle differences in their appearance and personality that have been directly inherited from their parents. The way their stripes pattern, what shade of brown their fur is, if they have a playful nature – all of these traits make each animal unique and give them a sense of authenticity as they crawl about on the screen.

“When you add those levels of complexity together, that’s where you start seeing natural behaviours that you can’t necessarily predict, but make sense,” Jackson says. “That’s where the authenticity actually comes from. So it’s been a real challenge but a really good challenge for us. If you look at the animal and you think it’s behaving correctly, and it looks like it’s animating correctly, then we’ve done our job.” 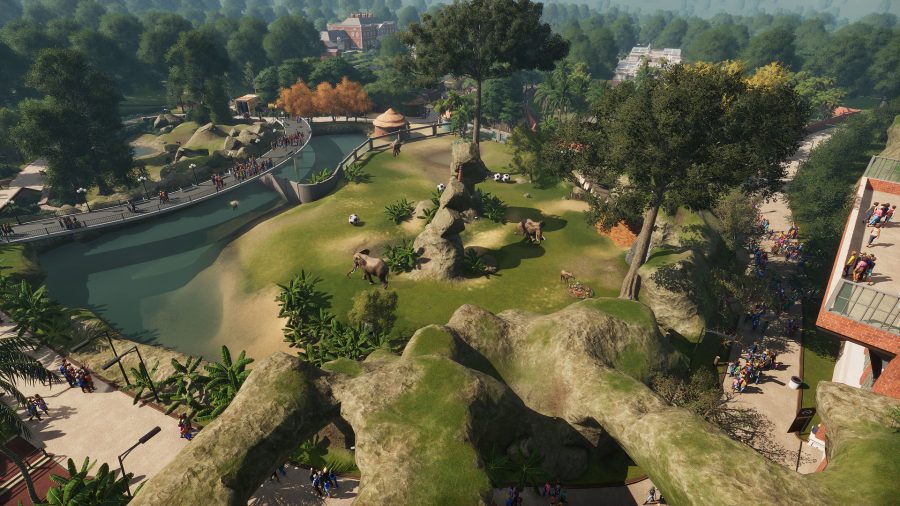 Keeping your animals happy is at the heart of making a successful zoo: making sure the terrain suits their preferred habitat, that they’re getting the right amount of nutrition, and that they’re within a safe social group. This also goes for the guests, who need to be kept happy as they enjoy the sights of your sanctuary. As with Planet Coaster, keeping your visitors happy and entertained will help you rake in more dollars, and with Planet Zoo there’s another guest gauge you have to keep your eye on: education.

In Planet Zoo, guests have a need to learn whilst visiting your zoo, so you should supply a means to educate your guests on the animals and their natural habitat. You do this by placing signs, speakers, and other educational devices near habitats. And not only can the guests become more knowledgeable, you could even learn about the animals you’re looking after as you build your zoo. 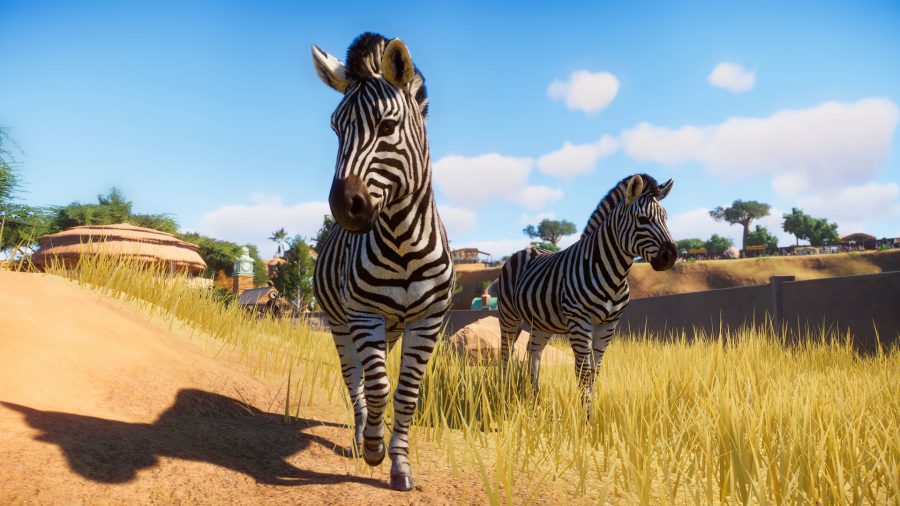 “The education aspect of the game partly is guest focus, but also a little bit player focused,” Jackson says. “You will employ members of staff and the staff will research the animals and over time they’ll perform research that adds to what we call our Zoopedia. Which is like a wiki, which fills up over time, so there will be more information that’s visible to the player as well.”

This educational tool also informs guests on conservation as a whole. Planet Zoo’s educational material addresses topics such as deforestation and global warming. “The reason that we took this on board really was because one of the mandates of a real zoo is to educate their guests,” Jackson explains. “So we want to make that part of our management simulation. We’re not going to push this so hard, but it’s there.”

The Planet Coaster community are fantastic. We absolutely want to see what they're going to create with Planet Zoo

The animal kingdom isn’t the only new aspect that Zoo brings to the Planet series. There’s also a new campaign mode. Jackson keeps the main story quiet but he does say that you’ll play the role of a junior zookeeper and will work your way up to the top. “We really wanted to take the scenarios that Planet Coaster had with the goal structure,” Jackson explains. “But to create a narrative that runs through the game so that we actually pick the player up and guide them through the entire scenario experience.”

Together with the campaign will be a sandbox mode which will give you unlimited resources and complete creative freedom. One of the highlights of being part of Frontier’s enthusiastic community is seeing the best Planet Coaster creations made by fans – from a Fallout-inspired theme park to the awe-inspiring city Minas Tirith from Lord of the Rings. 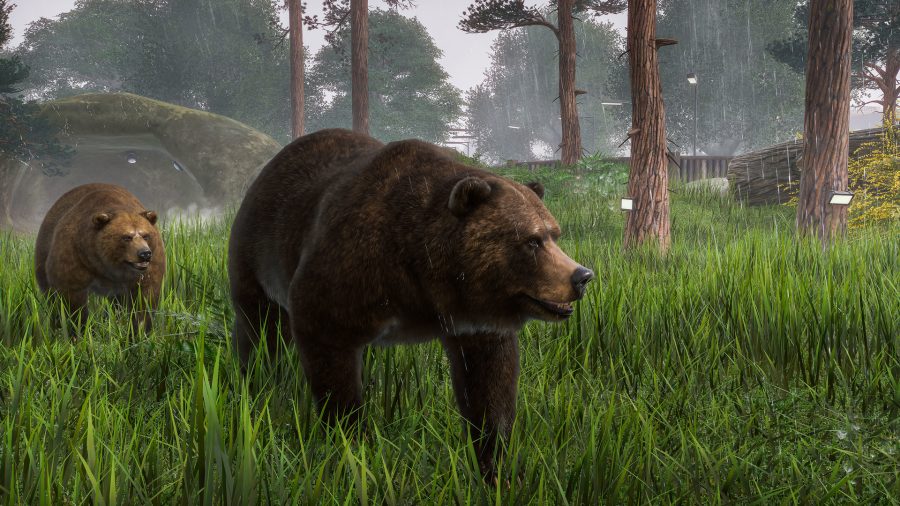 Understandably, this is one aspect of Planet Zoo that Jackson is particularly excited about. “The community that play Planet Coaster are fantastic. Amazing. The stuff they generate blows my mind. So, yeah, we absolutely want to see what they’re going to create with the new tools and the new piece-by-piece elements that we’re going to give them in Planet Zoo.”

Related: Check out our list of the best management games on PC

Upon seeing the landscaping and new construction tools that Frontier has to hand, I find myself sharing in Jackson’s excitement, my mind filling with the possible creations the community will magic up. I know that the first thing I’m creating is a 1:1 recreation of Pride Rock from the Lion King, while Circle of Life plays on repeat, obviously.