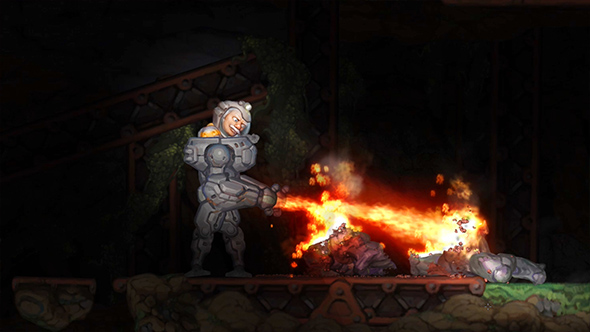 You may recognise Data Realms as the developers of Cortex Command, a physics-based action strategy game that has been a part of every indie bundle known to humankind. They’ve got a new game in Early Access called Planetoid Pioneers, which ditches the strategy for pure old-school action. They’re also putting together a very interesting way of showcasing mod content.

New blueprints will be downloaded from the Steam Workshop and automatically injected into the game. Items with positive ratings will then appear in item shops, and as vehicles, weapons, and NPCs on appropriate planets. Items you’ve subscribed to will be awarded in a “Steam altar,” which is often what I call my PC.

Among the top mods on the Workshop include a rather nifty-looking flamethrower, a reversible bike, and a loving rendition of David Bowie. If only all games could include those three items by default. The Workshop community is currently fairly small, but the developers are looking into more options for when that expands, possibly even curating the mods that come through by hand. An option of turning the feature off altogether is also likely on the way, perfect for those utterly terrified of seeing the penis guns that will surely be inevitable.

Mod tools are currently available only in the premium Contributor Edition of the game, though they’ll become available to all players once Planetoid Pioneers leaves Early Access.