The next PlanetSide will be a battle royale. It’s not a surprise, exactly – developer Daybreak Games has had a foot in the genre since PlayerUnknown himself designed a proto-PUBG mode for H1Z1. It makes sense that the studio would want to leverage its successful FPS series for the same purpose.

Yet there’s a whiff of sacrilege about it. PlanetSide has been a quintessential PC series – played at an extraordinary scale, it sees organised armies battle in a sci-fi world where consequences are persistent. In many ways, it remains the only true MMOFPS, having defined its niche and stuck to it. The idea that the name would be subsumed by the latest multiplayer phenomenon, just like everything else, is a disheartening one.

Which is why the upcoming context is particularly important: PlanetSide Arena is something Daybreak is doing as it “moves forward with the franchise,” lead designer Tony Morton tells us. It’s an experiment, one in which Daybreak can discover how PlanetSide suits session-based play, while the series at large advances. It’s also one that preserves many of the aspects that make PlanetSide what it is.

For starters, the shooting is class-based and hardcore, peering right down the sights rather than pulling back into third-person. The map is based on that of PlanetSide 2, albeit streamlined for exploration rather than riddled with choke points meant for base defense. A dropship, not unlike the Battle Bus, is taken from the sci-fi lore of the series – a rocket-propelled piece of fan service. And there’s even the promise of true scale with a 250v250 mode in which headset generals will have the advantage.

PCGN: Did you worry about what you’d lose with the persistent world?

The tech will support over 1,000 players

Tony Morton: A lot of that stuff still goes on in PlanetSide 2 for sure – there’s a persistent world, there’s a persistent war. When it comes to PlanetSide Arena, persistence is still there in terms of progression, making sure that every match matters. What we wanted to really experiment with was that session-based feel, and the success that you get when you win. Some of the feedback that we’ve seen in the past was, ‘When does it end? When do I win?’. That’s been one of those things we wanted to try in the PlanetSide universe.

Now, in terms of how we move forward and how the game may evolve, a lot of that will depend on feedback from the community, how things are received. If something like the ongoing war and that persistence comes in, there may be ways that we can find to work that into some of those larger ‘massive clash’ modes with 500 players, or up to 1,000 players. Are there ways that we can do episodic battles throughout that, so they can move on and continue? A lot of it is dependant on what players want to see.

Were there elements of the original PlanetSide games that you found put people off?

For me, it really came down to that finite victory point, that’s a lot of our focus in PlanetSide Arena. It’s why we wanted to make this installment that’s session-based and match-based. 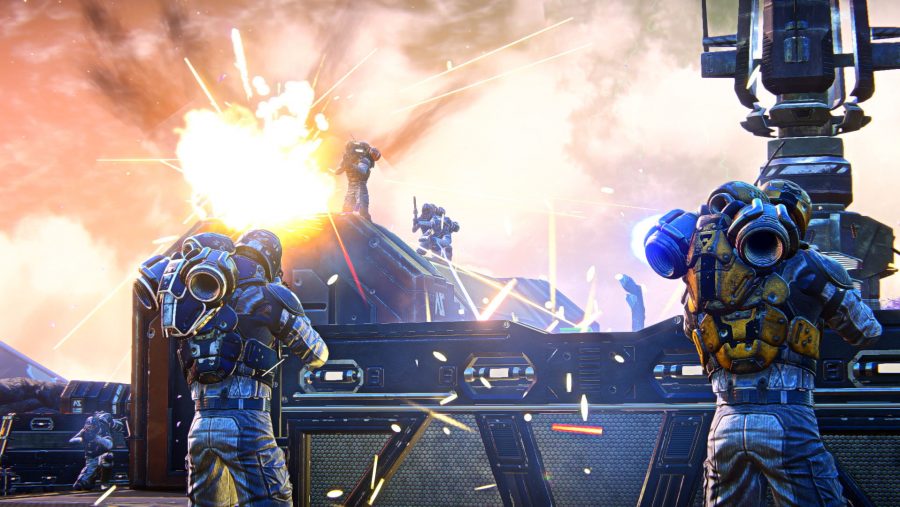 Will there still be a future for the persistent PlanetSide that people have had before?

So, not to really comment on the future of PlanetSide because that would be a different phone call, but this is something for us to educate ourselves on: what else can we do inside the PlanetSide universe as we do move forward with the franchise itself?

PlanetSide has always been known for that massive scale, that persistence, and those are things that we want to respect. But before we move forward and grow the franchise, there are some other things that we want to give a shot and try first – to set ourselves up for success in the future for growing the brand.

You have plans for a story – will that be something you write as a team, rather than something that comes organically from players?

We want to deliver seasonal story arcs. So while the seasons will be made up of bigger content beats, they will also be thematic and wrap into the story and that lore that we’re looking to deliver. I don’t have a whole lot of details on the specifics of that, but you can expect the seasonal beats to have some sort of theme behind them, so they’re more coherent and cohesive to the PlanetSide universe. And so players have something to sink their teeth into outside of just gameplay updates, balance updates, and things like that. 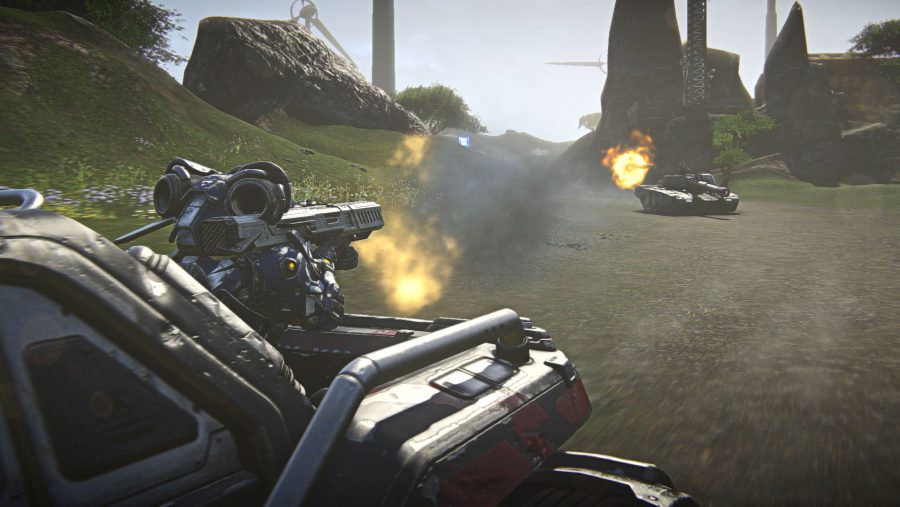 You mentioned the idea of 1,000 player matches – is that something you’ve prototyped already?

We’ve done some larger scale testing. The games and the tech will support well over 1,000, but right now we’re limiting it to 500. It really feels like a large scale, super chaotic battle. It’s a lot of fun because it doesn’t take itself as seriously. It leaves you open to enjoy, ‘What kind of crazy things can I pull off?’. With the tech advancements that we’ve made, we get better performance, more players running around on screen, and so everything just feels even more over the top than it has in the past.

We’re really excited to get that in the public’s hands so we can scale this thing up even further to see how far we can push it, until it breaks. We want to see how far we can go, so that we can understand what we need to do to go even further. If there’s something that PlanetSide has done in the past, it really is about carrying that torch for scale that other games haven’t been able to do. We want to make sure we respect that legacy, and find ways to continue that, to improve on it, and maybe make it go even bigger than it has in past.

We’re really excited to scale this thing up even further to see how far we can push it, until it breaks

You have three character classes in the key art and how they’re presented is reminiscent of Destiny. Have you focused on making solo and small squad play more satisfying for players who aren’t part of a larger group?

There’s a lot of social research and studies that have been done in terms of how hard it is to find X number of buddies to play a game like this. Finding groups of three is much easier than four or five, and typically players who can find a duo buddy, can find one for trios. We decided that three classes was a good number of classes to start with. It happened to work really well with the vehicles that we had going on.

It just came to be on its own – all the things came together with the designs and the desires. We’re really excited to try this smaller squad of three and see how it resonates. Because, like you said, it’s a bit more of a modern touch. We’re excited to get our hands on that, after some of the things that we’ve learned in the past when it comes to having to find so many people to play with.