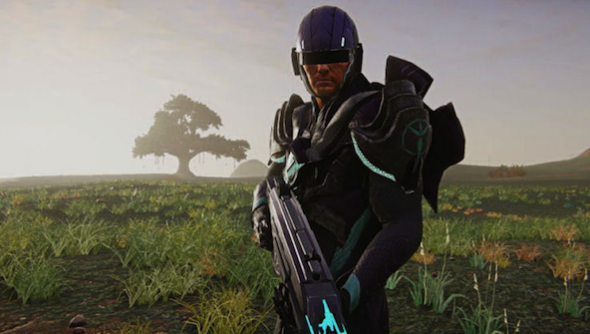 This morning game update number eleven hits Planetside 2, with amongst other things Light Assault Drifter Jumpjets enhancements and what Creative Director Matthew Higby calls “a pure “Quality of Life” patch, with a minimum of additions in terms of new items or systems and a lot of refinement, tuning and enhancements to the things you’ve already got.” Lots of fine tunes and tweaks then, for enhancing what I like to call “moments that need dubstep”.

The patch should be rolling out this morning, with lots of little changes that should make play more enjoyable. Light Assault Drifter Jumpjets “have been enhanced to provide a speed boosts while using them on flat ground, these should now provide a new alternative gameplay role for Light Assault,” Higby says. Here’s a little rundown of what has happened to the weaponry, with a full rundown on all the changes here at the forum.

Retuned the Empire Specific Heavy weapons: Jackhammer, MCG and Lasher. These should all be significantly more competitive with other HA weapon options, while still situational.

MAX Burster weapons have been retuned to be less effective at extreme ranges, they maintain the same effectiveness within ~250-300m.

Skyguard turrets have been buffed to provide enhanced effectiveness at all ranges, especially beyond 300m.

These two changes should make life better for ESF pilots/Liberator crews which previously were getting picked off at extreme ranges when not actively engaging infantry while still allowing MAXes to provide cover for squads against strafing ESFs and low flying libs threatening ground troops.

Changed shotgun damage model to reward more skillful usage and bring these in line with other close range options such as SMGs and Carbines – these should remain potent in close quarters, but not be the only viable option.

Basically, all this is an excuse to run their excellent dubstep trailer again. Can’t get enough wubs.