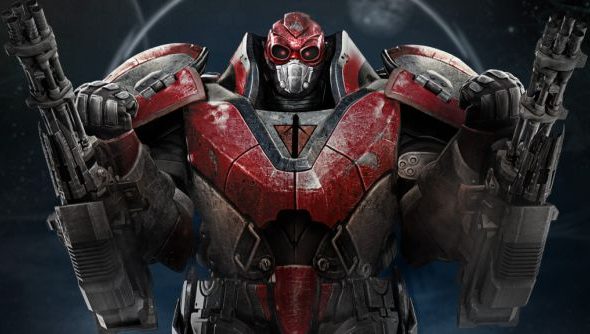 There was a very, very specific moment when I decided that no game would offer the type of fun that I could get from Planetside 2 this year.

I was flying a Mosquito out of the Terran Republic warpgate on Esamir – scanning the air for any Vanu or NC fighters or bombers. A Mosquito is the Terran Republic’s primary air-to-air fighter; it’s a nimble little thing, and I adore it. My favourite load-out: carrying both air-to-air missiles and a rapid fire machine gun that’s meant to rip through enemy fuselages. My favourite role: hovering over our ground forces and the inevitable swarm of bombers and air-to-ground forces that follow them: protecting them from other enemy fighters.

One of the tricks you learn quite quickly as a pilot is that you’re not flying the Planetside equivalent of fighter jets. Instead, you’re flying helicopters: with the rotors replaced by hover jets. Speed isn’t the goal: finesse control is. That means hovering – just pottering around the current zerg, scanning the sky by holding down the middle mouse button and spotting baddies.

One of the slightly hilarious tactics I’ve adopted is glueing my mosquito to the nearest jagged outcrop. Esamir’s full of them: giant blue mineral shards that burst out of the snow. They’re the perfect cover for an ambush.

I could tell you about my brilliant flying; the tactics of how trying to keep on the tail of a Shrike or Reaver is fun but pointless when you’re carrying heat-seeking missiles. But that’s not what excites me.

But it wasn’t any of that. It was the role-playing. What excites me more is the waiting, the scanning, the positioning. The picking a job and getting on with it. Contributing to this amazing and rolling war. The chase and the kill, though thrilling, is only half of it – the other, brighter half is the chatter, the organisation, the planning, and, as it coalesces, the spectacle.

It’s a ridiculous, clunky beast – a massively multiplayer first person shooter that occasionally feels like it’s held together with nothing but love and ambition. But it makes me so happy.

It’s complicated and deep, just like the original game. Three factions, all waging war across vast continents. I think it would have been very easy for SOE to try and streamline Planetside 2’s design – to reduce the number of classes, vehicles or loadouts. But they didn’t, really. They kept the same scale, and the same vehicles.

On that scale: with hundreds of players fighting over territory control, means there’s always something stupid or spectacular happening: usually right in front of you.

On that range of vehicles, and the range of classes, there’s a kind of exponential multiway jousting: as situations and player preferences bump up against each-other.

The result: Planetside 2 feels like an infinite story generator. I’ve found that players really want to take advantage of Planetside 2’s toys. I’ve fallen victim to vast air-raids, where tens of bombers just pound away at installations. I’ve seen a platoon of Infantry, hold the line on a ridge, before tanks and armour get into position. I’ve seen a swarm of Mosquitos buzz overhead, flying upside-down just because they can. I feel so proud to be part of that.

That’s not to say the game doesn’t have problems. It is clumsy. The HUD is ridiculous. The instant-match used by beginners to find fun is the worst way to join a fight. The chat and outfit management tools are a joke. The vehicle resourcing system is slapdash. The cost of new weapons absurd if you’re not willing to pay for them.

But, more than any game I’ve played, it creates entertaining, funny, memorable stories.

In our recent interview with Meteor Entertainment’s CEO Mark Long, he articulated why free-to-play games like Planetside and League of Legends inspire such loyalty. He said that in the new free-to-play ‘gaming as service’ era, players aren’t just buying hats for the sake of buying hats. “The guys spend money because they love the title. The reason they love it is because the devs listen to what they’re saying and change it to make it that way.”

That’s exactly how SOE are acting around Planetside 2. Being a fan feels like being a collaborator: their lead developers, and the owner of the company are active on forums, reddit and twitter. The game is evolving at a frantic, brilliant pace. It’s getting better, day by day.