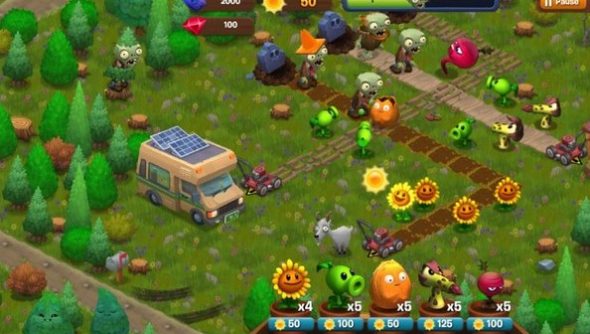 Plants vs Zombies 2: Garden Warfare, the long-awaited sequel to PopCap’s very best game, is getting an early summer release, the developers have divulged. But they’d rather talk about Plant vs Zombies Adventures – a social game due to enter limited beta on Facebook during the belated British Spring.

Plants vs Zombies Adventures isn’t the TF2-inspired shooter PopCap are rumoured to be working on, but rather a modified, isometric version of the original, poly-platform-released tower defence game.

“The game not only offers up exclusive new plants and zombies along with old favorites, it features all-new forms of zombie combat that will open PvZ to a whole new world. We like to think we’re creating a brand new twist on the classic Plants vs. Zombies that is the most social, shareable and expansive Plants vs. Zombies experience ever.”

Adventures is currently in closed beta, but will be opened up to chosen segments of the public in the coming weeks. A structural twist sees players launched on “road trips” around the US, to halt zombies in a variety of environments.

There’ll be new zombie and plant types, new means of defence, and leaderboards. And apparently you’ll be able to send hordes to invade your friends’ maps, which would presumably make you an arsehole.

A preview at Indie Social Games, who you’d better not tell about PopCap’s EA acquisition, speaks of new plants the Aspearagus and the melee-damage enabled Beet. New zombie type the Mad Hatter, meanwhile, is well protected by numerous forms of fetching headwear.

It sounds better by the paragraph, actually. Will you be giving Adventures the time of day, or holding out for the sequel proper?