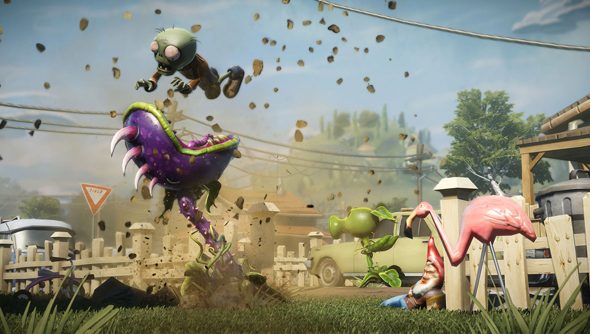 Plants vs Zombies: Garden Warfare is a port. That is, it’s a new edition of a game released four months ago for Xbox One, developed specifically for PC. The definition is not up for dispute.

So why are PopCap saying that it’s not a port? I think they mean that it’s not a port in the derogatory sense – free of the poor framerates, low resolutions and iffy control schemes we’ve come to expect from console-first developers. Take a look for yourself.

“PC is coming out – it’s coming out in a big way,” says creative director Justin Wiebe in this fawning developer video. “We’re really putting a lot of love and attention and energy into it.”

“It’s not a port,” Wiebe continues. “We have so many hardcore PC gamers on our team that live and breathe PC. Everything from our UI to how our mouse-driven controls are going to work, everything has been looked at from PC gamers’ POV.

“Also for people who love playing with a controller, you can plug in your controller and it will just work.”

The desert-themed map featured in the video is Jewel Junction – a new arena run through by an operating railway line, coming first to the PC. Which is poor compensation for the wait, if you ask us: isn’t this sort of platform-exclusive culture the reason we had the problem to begin with?

Plants vs Zombies: Garden Warfare is blooming on PC already in the US, and will poke its head above the soil in Europe by Friday.