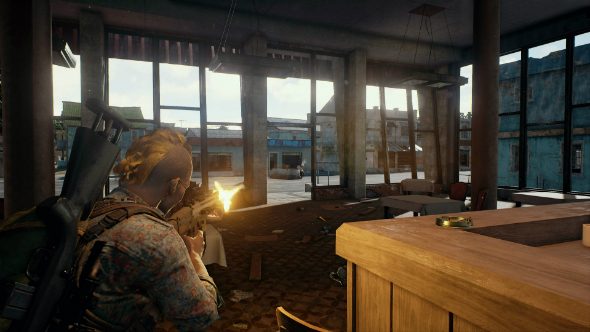 It was recently confirmed that PlayerUnknown’s Battlegrounds would be coming to Xbox One in late 2017. It’s being published by Microsoft themselves, presumably to help speed things along, but what does that mean for those on PC? Well, it looks like it may mean some fresh meat: Brendan Greene (PlayerUnknown himself) says that the team are looking into cross-platform play.

Are you new to PlayerUnknown’s Battlegrounds? Our beginner’s guide might help you win some chicken dinners.

In an interview with Gamereactor UK, he was asked about the possibility of cross-play between PC and Xbox One.

“We’re still discussing this internally,” Greene tells Gamereactor UK, “we want people to play together, of course, I want every battle royale player to play against every other, but we have to do it fairly.

“So we’re still discussing it, maybe we’ll do just controller vs controller, keyboard + mouse vs keyboard + mouse, something like that. But it’s still up in the air; until we launch, we don’t know. We’re going to have to see, get the game finished and then decide.”

Of course, balancing a shooter for cross-play between PC and console is always going to be a challenge. If they were to create controller-only queues, surely enforcing that would add a whole new challenge. From what Greene says, it sounds like, above all else, fair implementation is the thing holding it back above all else.

This follows on from talking about how developing for the Xbox One is going to help out with development on PC – optimisation is one example, as development tools for the Xbox One help point out bottleneck, and given both platforms are developed for the Universal Windows Platform, fixes on one may help the other. Optimising the game would do nicely for me, thanks.