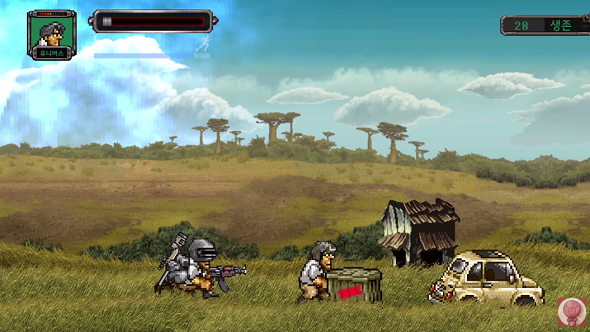 If you’ve been playing PUBG and getting frustrated by sharpshooters popping your skull from miles away, you’ll enjoy this new video. It imagines the battle royale game as a retro sidescroller, so your enemy is only ever as far as the edge of the screen.

If you love retro stuff, check out our list of the best old games.

In it, we see the players spread across a plane, with the camera following one character as he steams through the competition like one of those annoyingly good Twitch streamers.

It starts off with his fists, then he upgrades to the pan, blocking bullets and donking heads like an expert. It isn’t too long before he gets his hands on a gun, and we get to see more PUBG mechanics transported into the 2D setting.

There’s a bit of camping, there’s a supply drop, there’s a car, there’s electric smoke, there’s more than a little looting, and there’s a chicken dinner right at the end of it. Well, it was almost accurate (that was a joke about me being bad at PUBG).