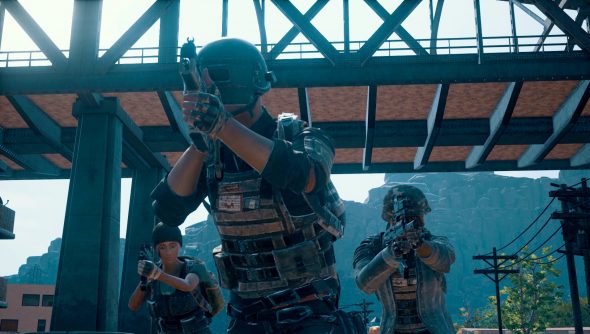 There are two major complaints about PlayerUnknown’s Battlegrounds, even as we move on from its official release date and far out of beta – it’s full of hackers and it runs like I would if I actually had to do a 100-person battle royale (poorly, very poorly). As part of a new patch on the test server, both those things are being looked at by PUBG Corp.

PUBG is good, but what’s the best battle royale game?

For stability, they’re splitting up players at the start of a game. Rather than the VOIP nightmare hell of gunfire, insults, and random jumping, you’ll find yourselves in a number of new, weaponless locations. The developers say this is “in order to optimize the server and game client performance” – presumably all the physics objects, impact events, and other bits were having issues.

“Previously, all the players would spawn together at the same location awaiting the start of the match. Lots of interaction among multiple players in such a small area had a high impact on the servers. To solve this, we have introduced multiple areas where players gather before the match start. As a result, the performance, both server and client-side, has improved.”

On hackers, they’re less descriptive, but do say that they will “be testing a new security (anti-cheat) measure that is still under development but we want to start gathering some data regarding it’s stability and compatibility. Some PCs may experience compatibility issues during this test, which may cause crashes when starting the game.”

Obviously, giving out specifics would rather spectacularly defy the point, but there is a feedback section on the official forums for people that experience issues not related to their aimbot.

Here’s the full patch notes. It’s on the test server now and will hit live once they’ve confirmed it does what they want it to and isn’t causing major issues – usually within a week.