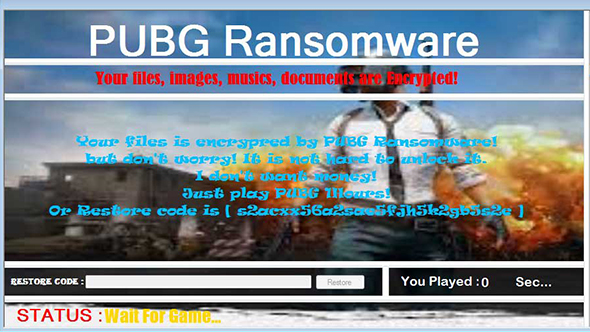 Ransomware is a particularly nasty form of malware that encrypts your files and demands some kind of fee in order to decrypt them. Normally that fee is measured in dollars, but a new program demands you pay by playing PUBG.

Here are our picks for the next PUBG maps.

PUBG Ransomware, as reported by BleepingComputer, encrypts files and folders on your desktop and drops a “.pubg” extension on the end. Once the process is done, it gives you this message: “Your files is encrypted by PUBG Ransomware! but don’t worry! It is not hard to unlock it. I don’t want money! Just play PUBG 1Hours!”

You can indeed launch PUBG to release the ransom, but you only actually have to run it for three seconds rather than the suggested “1Hours.” Apparently, it monitors for processes named “TslGame,” so any executable with that title will meet the requirement. Alternatively, you can just input the restore code which the program supplies as soon as it launches.

So what’s the point of it? Probably just a strange prank, but I like to imagine that whoever’s behind the software just wants somebody to play PUBG with. After all, it’s gotta be tough to find a game with only – let me check my notes – two million players online at a time.