PlayerUnknown’s Battlegrounds isn’t just a runaway, industry-altering success on PC – it’s also a new staple title for Microsoft on Xbox One, where it’s still in the platform’s game preview program. Unfortunately, it seems Microsoft’s made a pretty significant misstep in the game’s marketing, with a promotional image that bears a striking resemblance to a bit of fan made art.

The fan in question is Reddit user Macsterr, who posted a very cool ad concept for Xbox One PUBG two months ago. It shows an Xbox One console topped by a field, with a PUBG player standing in the middle of it. Derived from a wallpaper made by another fan, it’s an evocative idea for marketing material, and apparently Microsoft agree. 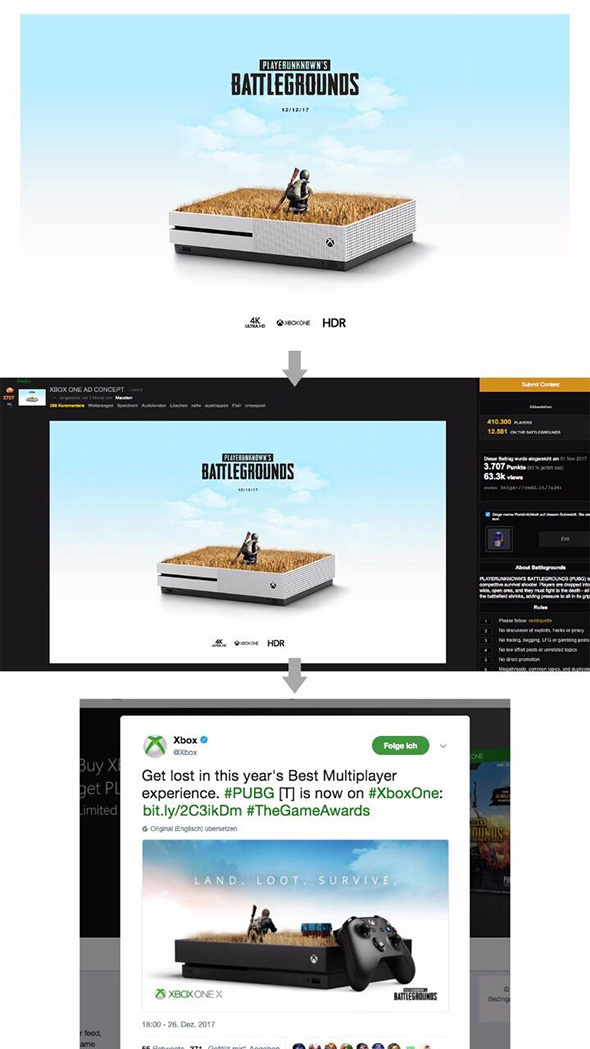 As you can see, Microsoft’s much more recent official ad bears a positively striking resemblance to the fan made concept.

Macsterr’s post revealing the apparent copying became one of the top Reddit submissions for the week, prompting Microsoft to remove the offending Tweet. “I‘m not saying I own any copyright,” says Macsterr, “but the original post has 63k views so I assume they saw it and I got no credits.”

Resident Xbox spokesman Larry ‘Major Nelson’ Hryb said the issue “is being investigated. In the meantime, our official channels have pulled down the asset in question.” Hryb’s getting in contact with Macsterr “once I get more details.”

When other redditors lamented having to shelve their pitchforks, Hryb joked “I am sure there will be plenty of opportunities to pull them out again in the future.”

While a company may be within their legal rights to do pretty much anything they want with fanmade works based on their IP (or their development partners’ IP in this case), the “not cool, bro” response from the community is entirely understandable.