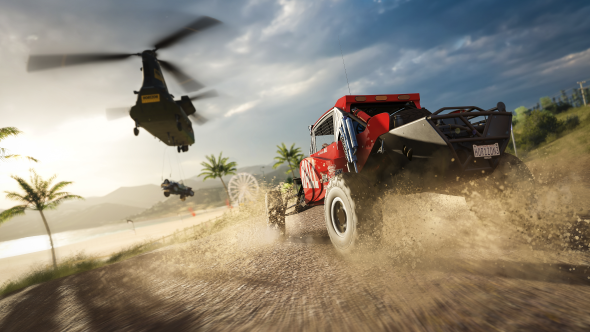 The developers of Forza Horizon have hired developers from Grand Theft Auto V, Metal Gear Solid, and Hellblade: Senua’s Sacrifice, ahead of a new open-world action RPG. The new project from Playground Games will be the team’s first ever non-racing project.

Forza Horizon 3 is a thief, and that’s the best thing a racing game can be.

The newest addition to the new project is Sean Eyestone, who previously worked on Star Wars Battlefront II, having spent ten years working at Kojima Productions where he worked on MGSV. Other recent hires include Will Kennedy, who worked as a senior designer on both the single and multiplayer iterations of Grand Theft Auto V, and Juan Fernandez di Simon, who was senior designer at Ninja Theory during development of Hellblade.

The company has also bought a new studio to house development of its new game. The second studio will be home to more than 200 employees, taking the total number of developers at PlayGround up to 400 people.

There’s no information just yet as to exactly what the new project is, but Playground’s CEO told GamesIndustry.biz that it’s a “hugely exciting project that is already attracting world-class talent to Playground.”